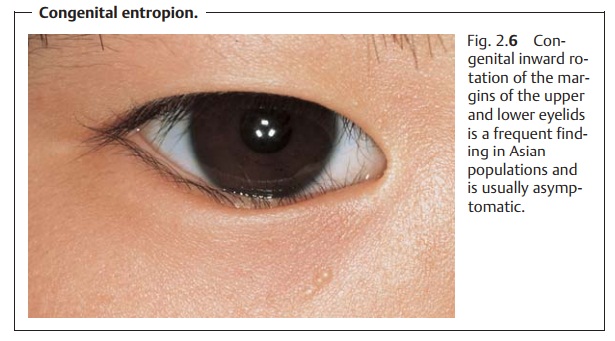 Entropion is characterized by inward rotation of the eyelid margin.

Entropion is characterized by inward rotation of the eyelid margin. The margin of the eyelid and eyelashes or even the outer skin of the eyelid are in contact with the globe instead of only the conjunctiva. The following forms are differ-entiated according to their origin (see Etiology): 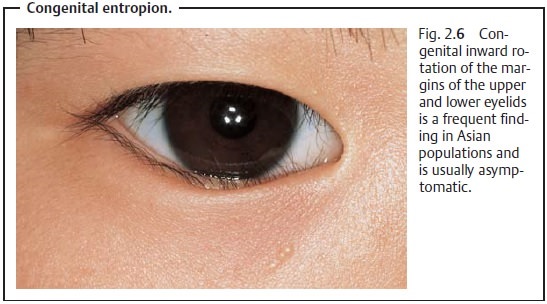 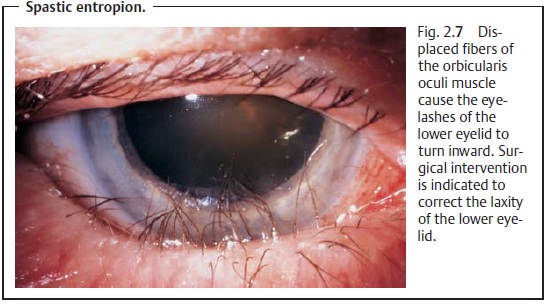 Congenital entropion occurs frequently among Asians but israre among people of European descent, in whom the spastic and cicatricial forms are more commonly encountered.

❖Congenital entropion: This results from fleshy thickening of the skin andorbicularis oculi muscle near the margin of the eyelid. Usually the lowereyelid is affected. This condition may persist into adulthood.

– The structures supporting the lower eyelid (palpebral ligaments, tarsus, and eyelid retractor) may become lax with age, causing the tarsus to tilt inward.

– This causes the fibers of the orbicularis oculi muscle to override the normally superior margin of the eyelid, intensifying the blepharospasm resulting from the permanent contact between the eyelashes and the eyeball.

– Senile enophthalmos, usually occurring in old age as a result of atrophy of the orbit fatty tissue, further contributes to instability of the lower eyelid.

❖ Cicatricial entropion: This form of entropion is frequently the result ofpostinfectious or post-traumatic tarsal contracture (such as trachoma; burns and chemical injuries). Causes can also include allergic and toxic reactions (pemphigus, Stevens-Johnson syndrome, and Lyell’s syndrome).

Constantrubbing of the eyelashes against the eyeball (trichiasis) represents a per-manent foreign-body irritation of the conjunctiva which causes a blepharo-spasm  that in turn exacerbates the entropion. The chronically irritated conjunctiva is reddened, and the eye fills with tears. Only congenital entropion is usually asymptomatic.

❖ Congenital entropion: To the extent that any treatment is required, it con-sists of measured, semicircular resection of skin and orbicularis oculi muscle tissue that can be supplemented by everting sutures where indi-cated.

❖ Spastic entropion: Surgical management must be tailored to the specificsituation. Usually treatment combines several techniques such as shorten-ing the eyelid horizontally combined with weakening or diverting the pre-tarsal fibers of the orbicularis oculi muscle and shortening the skin verti-cally.

❖ Cicatricial entropion: The surgical management of this form is identical tothat of spastic entropion.

An adhesive bandage may be applied to increase tension on the eyelid for temporary relief of symptoms prior to surgery.

Congenital entropion is usually asymptomatic and often resolves within the first few months of life.

❖ Spastic entropion: The prognosis is favorable with prompt surgical inter-vention, although the disorder may recur. Left untreated, spastic entropion entails a risk of damage to the corneal epithelium with superin-fection which may progress to the complete clinical syndrome of a serpigi-nous corneal ulcer.

❖ Cicatricial entropion: The prognosis is favorable with prompt surgicalintervention (i.e., before any corneal changes occur).