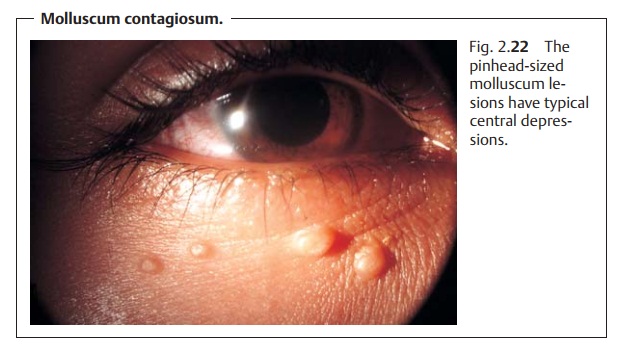 The round cysts of the glands or Moll are usually located in the angle of the eye.

The round cysts of the glands or Moll are usually located in the angle of theeye. Their contents are clear and watery and can be transilluminated. Gravitycan result in ectropion (Fig. 2.20). Therapy consists of marsupialization. The prognosis is good. 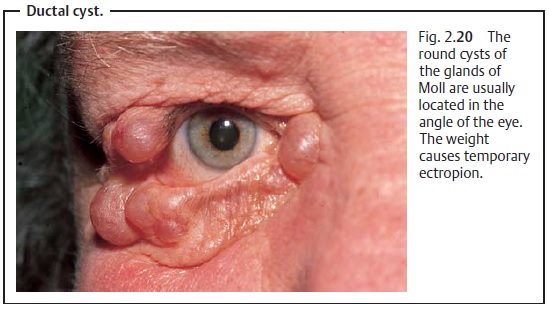 Local fat metabolism disorder that produces lipoprotein deposits. These are usually bilateral in the medial canthus.

Postmenopausal women are most frequently affected. Ahigher incidence has also been observed in patients with diabetes, increased levels of plasma lipoprotein, or bile duct disorders.

The soft yellow white plaques are sharply demarcated. They areusually bilateral and distributed symmetrically (Fig. 2.21). Aside from the cos-metic flaw, the patients are asymptomatic. 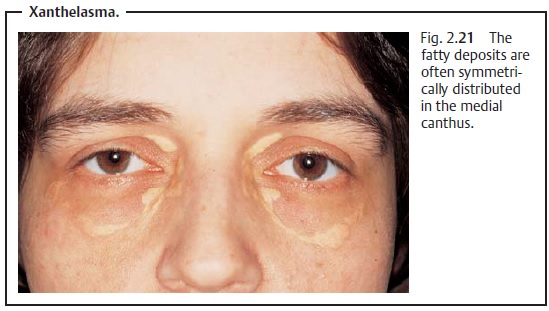 The plaques can only be removed surgically. Theincidence of recurrence is high.

The noninflammatory contagious infection is caused by DNA viruses. The disease usually affects children and teenagers and is transmitted by direct contact. The pinhead-sized lesions have typical central depressions and are scattered near the upper and lower eyelids (Fig. 2.22). These lesions are re-moved with a curet. (In children this is done under short-acting anesthesia.) 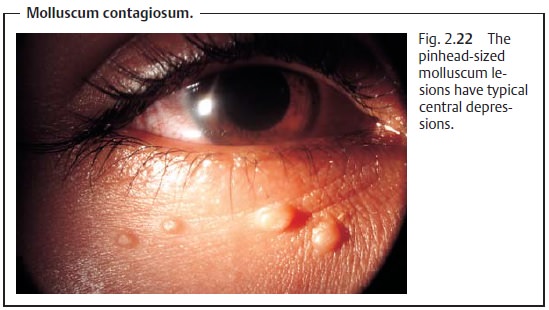 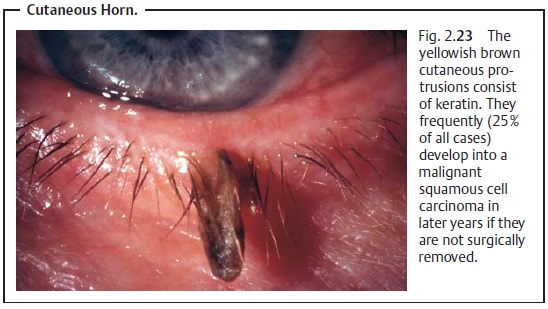 A rapidly growing tumor with a central keratin mass that opens on the skinsurface, which can sometimes be expressed (Fig. 2.24). The tumor mayresolve spontaneously, forming a small sunken scar. 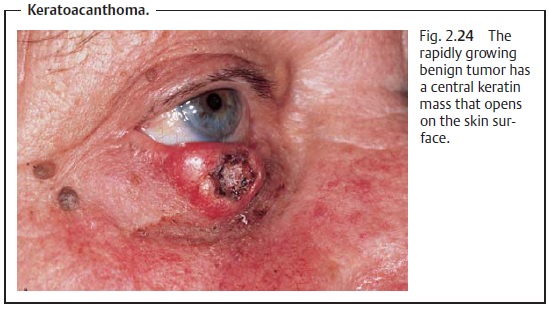 Differential diagnosis should exclude abasal cell carcinoma(see that section);the margin of a keratoacanthoma is characteristically avascular. Likewise, a squamous cell carcinoma can only be excluded by a biopsy.

Congenital benign vascular anomaly resembling a neoplasm that is most frequently noticed in the skin and subcutaneous tissues.

Girls are most often affected (approximately 70% of all cases).

Facial lesions most commonly occur in the eyelids (Fig. 2.25). 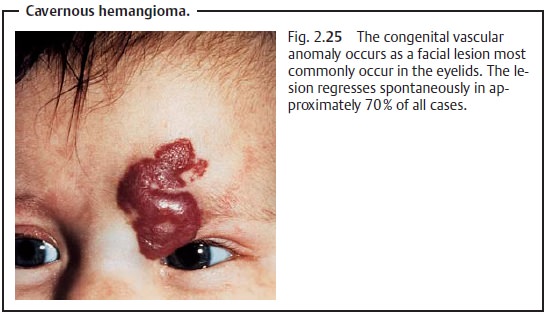 Hemangiomas can be compressed, and the skinwill then appear white.

Nevus flammeus:This is characterized by a sharplydemarcated bluish red mark (“port-wine” stain) resulting from vascular expansion under the epidermis (not a growth or tumor).

A watch-and-wait approach is justified in light of the high rate ofspontaneous remission (approximately 70%). Where there is increased risk of amblyopia due to the size of the lesion, cryotherapy, intralesional steroidinjections, or radiation therapy can accelerate regression of the hemangioma.

Neurofibromatosis is regarded as a phacomatosis (a developmental disorder involving the simultaneous presence of changes in the skin, central nervous system, and ectodermal portions of the eye).

The numerous tumors are soft,broad-based, or pediculate, and occur either in the skin or in subcutaneous tissue, usually in the vicinity of the upper eyelid.

They can reach monstrous proportions and present as elephantiasis of theeyelids (Fig. 2.26). 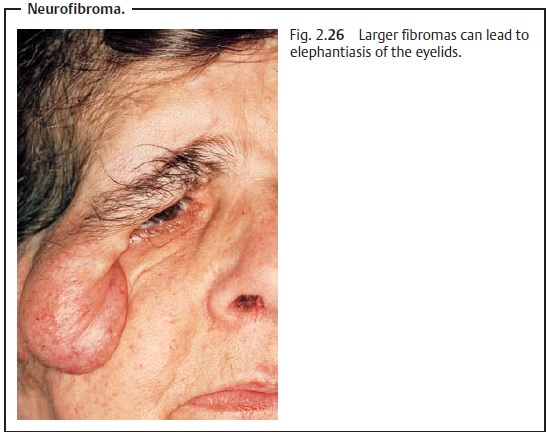 Smaller fibromas can be easily removed by surgery. Largertumors always entail a risk of postoperative bleeding and recurrence. On the whole, treatment is difficult.