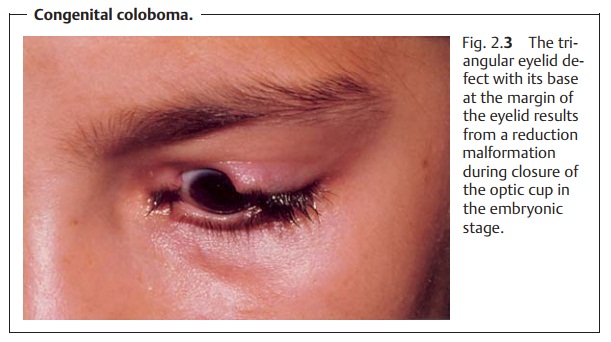 A normally unilateral triangular eyelid defect with its base at the margin of the eyelid occurring most often in the upper eyelid.

A normally unilateral triangular eyelid defect with its base at the margin of the eyelid occurring most often in the upper eyelid (Fig. 2.3). 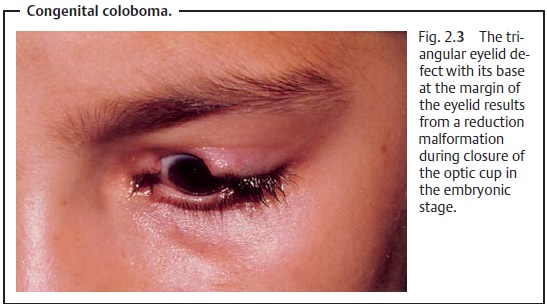 Epidemiology and etiology.Colobomas areraredefects resulting from areduction malformation (defective closure of the optic cup). They are only rarely the result of an injury.

Diagnostic considerations: The disorder is often accompanied by additionaldeformities such as dermoid cysts or a microphthalmos. Congenital defects of the first embryonic branchial arch that can result in coloboma include Franceschetti’s syndrome (mandibulofacial dysostosis) or Goldenhar’s syn-drome (oculoauriculovertebral dysplasia). Depending on the extent of the coloboma, desiccation symptoms on the conjunctiva and cornea with incipient ulceration may arise from the lack of regular and uniform moisten-ing of the conjunctiva and cornea.

Treatment: Defects are closed by direct approximation or plastic surgerywith a skin flap.

A crescentic fold of skin usually extending bilaterally between the upper and lower eyelids and covering the medial angle of the eye. This rare congenitalanomaly is harmless and typical in eastern Asians. However, it also occurswith Down’s syndrome (trisomy 21 syndrome). Thirty per cent of newborns have epicanthal folds until the age of six months. Where one fold is more pro-nounced, it can simulate esotropia. The nasal bridge becomes more pro-nounced as the child grows, and most epicanthal folds disappear by the age of four.

This refers to horizontal shortening of the palpebral fissure with fusion ofthe eyelids at the lateral and medial angles of the eye. Usually, the partial ortotal fusion between the upper and lower eyelids will be bilateral, and the palpebral fissure will be partially or completely occluded as a result. Posterior to the eyelids, the eyeball itself will be deformed or totally absent. Ankylo-blepharon is frequently associated with other skull deformities.