The mathematics of enzyme kinetics can certainly look challenging. In fact, an understanding of kinetic parameters can often provide key information about the role of an enzyme within a living organism.

The mathematics of enzyme kinetics can certainly look challenging. In fact, an understanding of kinetic parameters can often provide key information about the role of an enzyme within a living organism. Many of the ways of doing kinetic plots of this sort were developed by physical organic chemists, who then went on to propose mechanisms for reactions of all sorts based on kinetic data. Four aspects are useful: comparison of KM, comparison of kcat or turnover number, comparison of kcat/ KMratios, and speciĂžc locations of enzymes within an organism.

Let us start by comparing the values of KM for two enzymes that catalyze an early step in the breakdown of sugars: hexokinase and glucokinase. Both enzymes catalyze the formation of a phosphate ester linkage to a hydroxyl group of a sugar. Hexokinase can use any one of several six-carbon sugars, including glucose and fructose, the two components of sucrose (common table sugar), as substrates. Glucokinase is an isozyme of hexokinase that is primarily involved in glucose metabolism. The KM for hexokinase is 0.15 mM for glucose and 1.5 mM for fructose.

The KM for glucokinase, a liver-specific enzyme, is 20 mM. (We shall use the expression KM here, even though some hexokinases studied do not follow Michaelis-Menten kinetics, and the term [S]0.5 might be more appropriate. Not all enzymes have a KM, but they do all have a substrate concentration that gives rise to Vmax/2.

Comparison of these numbers tells us a lot about sugar metabolism. Because the resting level for blood glucose is about 5 mM, hexokinase would be expected to be fully active for all body cells. The liver would not be competing with the other cells for glucose. However, after a carbohydrate-rich meal, blood glu-cose levels often exceed 10 mM, and, at that concentration, the liver glucokinase would have reasonable activity. Furthermore, because the enzyme is found only in the liver, the excess glucose will be preferentially taken into the liver, where it can be stored as glycogen until it is needed. Also, the comparison of the two sugars for hexokinase indicates clearly that glucose is preferred over fructose as a nutrient.

Similarly, if one compares the form of the enzyme lactate dehy-drogenase found in heart muscle to the type found in skeletal muscle, one can see small differences in amino acid composition. These differences in turn affect the reaction catalyzed by this enzyme, the conversion of pyruvate to lactate. The heart type has a high KM, or a low affinity for pyruvate, and the muscle type has a low KM, or a high affinity for pyruvate. This means that the pyruvate will be preferentially converted to lactate in the muscle but will be preferentially used for aerobic metabolism in the heart, rather than being converted to lactate. These conclusions are consistent with the known biology and metabolism of these two tissues.

As can be seen from Table 6.2, the Ăžrst two enzymes are very reactive; catalase has one of the highest turnover numbers of all known enzymes. These high numbers allude to their importance in detoxifying hydrogen peroxide and preventing formation of CO2 bubbles in the blood; these are their respective reactions. 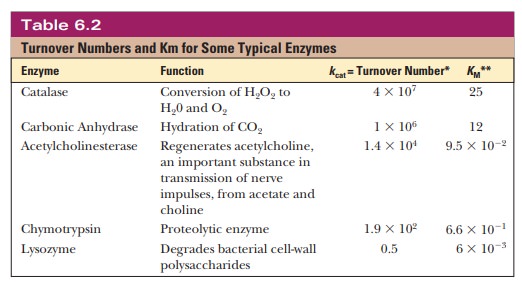