Many addictive drugs, such as heroin, operate by binding to a particular receptor in the neurons, mimicking the action of a neuro-transmitter.

Many addictive drugs, such as heroin, operate by binding to a particular receptor in the neurons, mimicking the action of a neuro-transmitter. When a person is addicted to such a drug, a common way to attempt to treat the addiction is to use a compound to block the receptor, thereby denying the drug’s access to it. Cocaine addiction has always been difficult to treat, primarily because of its unique modus operandi. As shown, cocaine blocks the reuptake of the neurotransmitter dopamine. Thus, dopamine stays in the system longer, overstimulating the neurons and leading to the reward signals in the brain that lead to addiction. Using a drug to block a receptor would be of no use with cocaine addiction and would probably just make removal of dopamine even more unlikely.

Cocaine can be degraded by a specific esterase, an enzyme that hydrolyzes an ester bond that is part of cocaine’s structure. In the process of this hydrolysis, the cocaine must pass through a transition state that changes its shape. Catalytic antibodies to the transition state of the hydrolysis of cocaine were created. When administered to patients suffering from cocaine addiction, the antibodies successfully hydrolyzed cocaine to two harmless degradation products-benzoic acid and ecgonine methyl ester. When degraded, the cocaine cannot block dopamine reuptake. No prolongation of the neuronal stimulus occurs, and the addictive effects of the drug vanish over time. 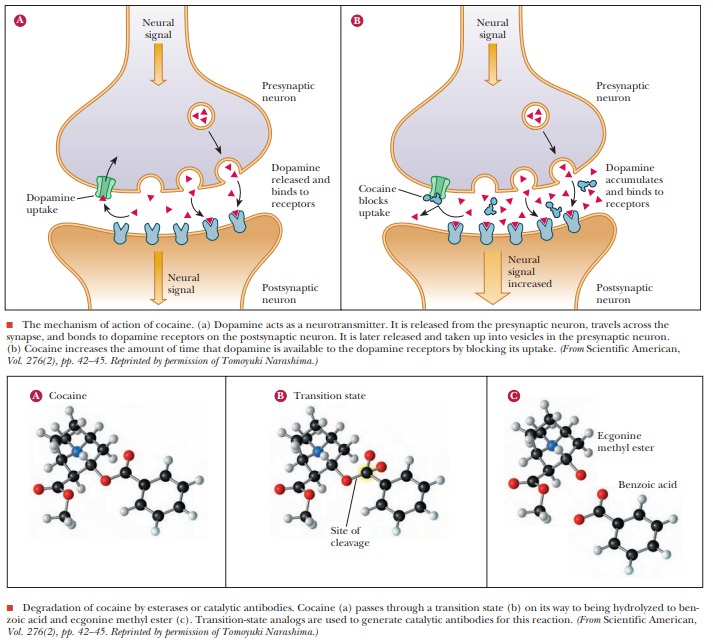