Cofactors are nonprotein substances that take part in enzymatic reactions and are regenerated for further reaction.

Cofactors are nonprotein substances that take part in enzymatic reactions and are regenerated for further reaction. Metal ions frequently play such a role, and they make up one of two important classes of cofactors. The other important class (coenzymes) is a mixed bag of organic compounds; many of them are vitamins or are metabolically related to vitamins.

Some of the most important organic coenzymes are vitamins and their deriv-atives, especially B vitamins. Many of these coenzymes are involved in oxidation– reduction reactions, which provide energy for the organism. Others serve as group-transfer agents in metabolic processes (Table 7.1). We shall see these coen-zymes again when we discuss the reactions in which they are involved. For the present, we shall investigate one particularly important oxidation–reduction coenzyme and one group-transfer coenzyme.

Nicotinamide adenine dinucleotide (NAD+) is a coenzyme in many oxidation– reduction reactions. Its structure (Figure 7.18) has three parts-a nicotinamide ring, an adenine ring, and two sugar–phosphate groups linked together. The nicotinamide ring contains the site at which oxidation and reduction reactions occur (Figure 7.19). Nicotinic acid is another name for the vitamin niacin. The adenine–sugar–phosphate portion of the molecule is structurally related to nucleotides. 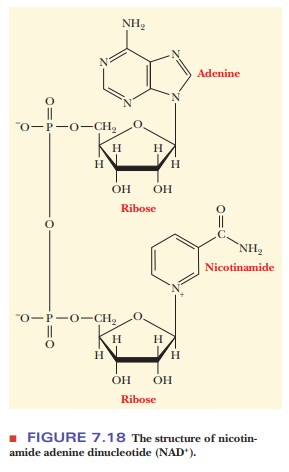 The B6 vitamins (pyridoxal, pyridoxamine, and pyridoxine and their phos-phorylated forms, which are the coenzymes) are involved in the transfer of amino groups from one molecule to another, an important step in the bio-synthesis of amino acids (Figure 7.20). In the reaction, the amino group is transferred from the donor to the coenzyme and then from the coenzyme to the ultimate acceptor (Figure 7.21). 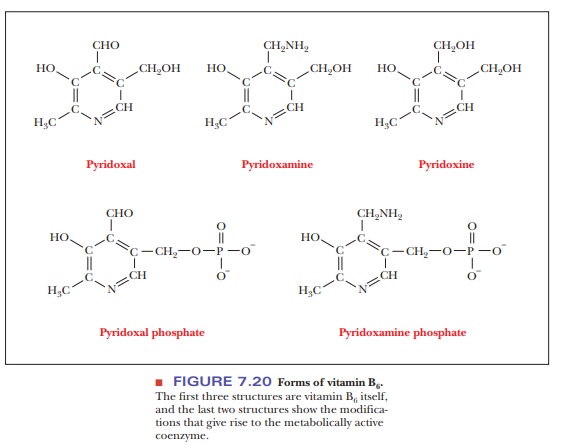 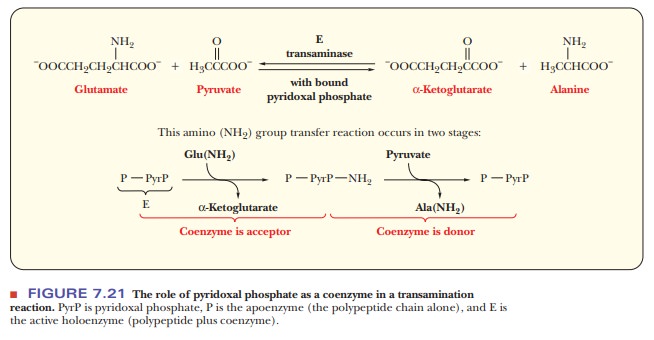 Coenzymes are nonprotein substances that take part in enzymatic reac-tions and are regenerated for further reaction.

Metal ions can serve as coenzymes, frequently by acting as Lewis acids.

There are also many organic coenzymes, such as NAD+ and FAD, most of which are vitamins or are structurally related to vitamins.