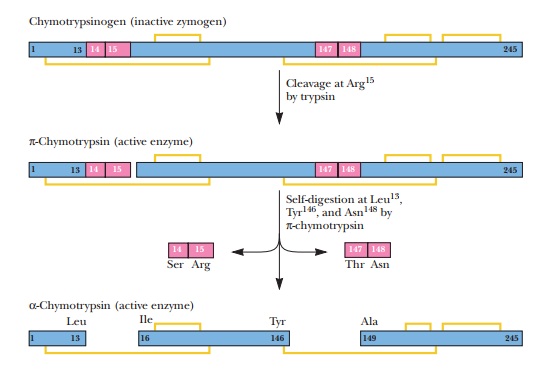 Allosteric interactions control the behavior of proteins through reversible changes in quaternary structure, but this mechanism, effective though it may be, is not the only one available.

Allosteric interactions control the behavior of proteins through reversible changes in quaternary structure, but this mechanism, effective though it may be, is not the only one available. A zymogen, an inactive precursor of an enzyme, can be irreversibly transformed into an active enzyme by cleavage of covalent bonds.

The proteolytic enzymes trypsin and chymotrypsin provide a classic example of zymogens and their activation. Their inactive precursor molecules, trypsinogen and chymotrypsinogen, respectively, are formed in the pancreas, where they would do damage if they were in an active form. In the small intestine, where their digestive properties are needed, they are activated by cleavage of specific peptide bonds. The conversion of chymotrypsinogen to chymotrypsin is catalyzed by trypsin, which in turn arises from trypsinogen as a result of a cleavage reaction catalyzed by the enzyme enteropeptidase. Chymotrypsinogen consists of a single polypeptide chain 245 residues long, with five disulfide (-S-S-) bonds. When chymotrypsinogen is secreted into the small intestine, trypsin present in the digestive system cleaves the peptide bond between arginine 15 and isoleucine 16, counting from the N-terminal end of the chymotrypsinogen sequence (Figure 7.10). The cleavage produces active p-chymotrypsin. The 15-residue fragment remains bound to the rest of the protein by a disulfide bond. Although p-chymotrypsin is fully active, it is not the end product of this series of reactions. It acts on itself to remove two dipeptide fragments, producing α-chymotrypsin, which is also fully active. The two dipeptide fragments cleaved off are Ser 14-Arg 15 and Thr 147-Asn 148; the final form of the enzyme, α-chymotrypsin, has three polypeptide chains held together by two of the five original, and still intact, disulfide bonds. (The other three disulfide bonds remain intact as well; they link portions of single polypeptide chains.) When the term chymotrypsin is used without specifying the a or the p form, the final a form is meant. 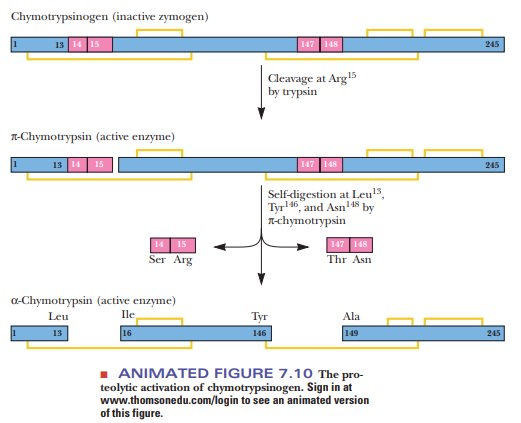 Blood clotting also requires a series of proteolytic activations involving sev-eral proteins, particularly the conversions of prothrombin to thrombin and of fibrinogen to fibrin. Blood clotting is a complex process; for this discussion, it is sufficient to know that activation of zymogens plays a crucial role. In the final, best-characterized step of clot formation, the soluble protein fibrinogen is con-verted to the insoluble protein fibrin as a result of the cleavage of four peptide bonds. The cleavage occurs as the result of action of the proteolytic enzyme thrombin, which, in turn, is produced from a zymogen called prothrombin. The conversion of prothrombin to thrombin requires Ca2+ as well as a number of proteins called clotting factors.

Zymogens are inactive precursors of an enzyme.

A zymogen is converted to the active form by the irreversible cleavage of specific peptide bonds in the protein.

Many digestive enzymes, such as trypsin and chymotrypsin, are initially produced as zymogens. They become active only after arriving at their final destination.