The Nature of the Active Site

How do we determine the essential amino acid residues? How does the architecture of the active site affect catalysis? How do the critical amino acids catalyze the chymotrypsin reaction?

The Nature of the Active Site

In this section we will look at the specific mechanism by which an enzyme is able to increase the rate of a chemical reaction. This mechanism is based on the exact three-dimensional arrangement of the amino acids in the active site. We can ask several questions about the mode of action of an enzyme. Here are some of the most important:

·    What is the spatial relationship of the critical amino acid residues in the active site?

·    What is the mechanism by which the critical amino acid residues catalyze the reaction?

Answers to these questions are available for chymotrypsin, and we shall use its mechanism as an example of enzyme action. Information on well-known systems such as chymotrypsin can lead to general principles that are applicable to all enzymes. Enzymes catalyze chemical reactions in many ways, but all reactions have in common the requirement that some reactive group on the enzyme interact with the substrate. In proteins, the α-carboxyl and α-amino groups of the amino acids are no longer free because they have formed peptide bonds. Thus, the side-chain reactive groups are the ones involved in the action of the enzyme. Hydrocarbon side chains do not contain reactive groups and are not involved in the process. Functional groups that can play a catalytic role include the imidazole group of histidine, the hydroxyl group of serine, the carboxyl side chains of aspartate and glutamate, the sulfhydryl group of cysteine, the amino side chain of lysine, and the phenol group of tyrosine. If the α-carboxyl or the α-amino group of the peptide chain are positioned in the active site, then they too can play a role.

Chymotrypsin catalyzes the hydrolysis of peptide bonds adjacent to aro-matic amino acid residues in the protein being hydrolyzed; other residues are attacked at a lower frequency. In addition, chymotrypsin catalyzes the hydro-lysis of esters in model studies in the laboratory. The use of model systems is common in biochemistry because a model provides the essential features of a reaction in a simple form that is easier to work with than the one found in nature. The amide (peptide) bond and the ester bond are similar enough that the enzyme can accept both types of compounds as substrates. Model systems based on the hydrolysis of esters are frequently used to study the peptide hydro-lysis reaction.

A typical model compound is p-nitrophenyl acetate, which is hydrolyzed in two stages. The acetyl group is covalently attached to the enzyme at the end of the first stage (Step 1) of the reaction, but the p-nitrophenolate ion is released. In the second stage (Step 2), the acyl-enzyme intermediate is hydrolyzed, releasing acetate and regenerating the free enzyme. The kinetics observed when p-nitrophenyl acetate is first mixed with chymotrypsin shows an initial burst and then a slower phase (Figure 7.11). This reaction is con-sistent with an enzyme that has two phases, one often forming an acylated enzyme intermediate. 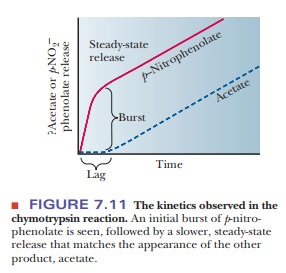 How do we determine the essential amino acid residues?

The serine residue at position 195 is required for the activity of chymotrypsin; in this respect, chymotrypsin is typical of a class of enzymes known as serineproteases. Trypsin and thrombin, mentioned previously, are also serineproteases. The enzyme is completely inactivated when this serine reacts with diisopropylphosphofluori-date (DIPF), forming a covalent bond that links the serine side chain with DIPF. The formation of covalently modified versions of specific side chains on proteins is called labeling; it is widely used in laboratory studies. The other serine residues of chymotrypsin are far less reactive and are not labeled by DIPF (Figure 7.12).

Histidine 57 is another critical amino acid residue in chymotrypsin. Chemical labeling again provides the evidence for involvement of this resi-due in the activity of chymotrypsin. In this case, the reagent used to label the critical amino acid residue is N-tosylamido-L-phenylethyl chloromethyl ketone (TPCK), also called tosyl-L-phenylalanine chloromethyl ketone. The phenyl-alanine moiety is bound to the enzyme because of the specificity for aromatic amino acid residues at the active site, and the active site histidine residue reacts because the labeling reagent is similar to the usual substrate. 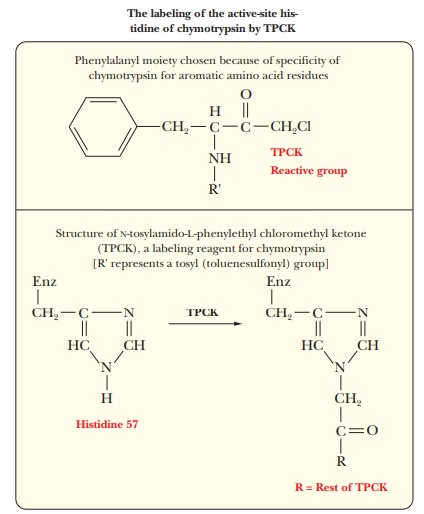 How does the architecture of the active site affect catalysis?

Both serine 195 and histidine 57 are required for the activity of chymotrypsin; therefore, they must be close to each other in the active site. The determination of the three-dimensional structure of the enzyme by X-ray crystallography provides evidence that the active-site residues do indeed have a close spatial relationship. The folding of the chymotrypsin backbone, mostly in an antiparallel pleated-sheet array, positions the essential residues around an active-site pocket (Figure 7.13). Only a few residues are directly involved in the active site, but the whole molecule is necessary to provide the correct three-dimensional arrangement for those critical residues. 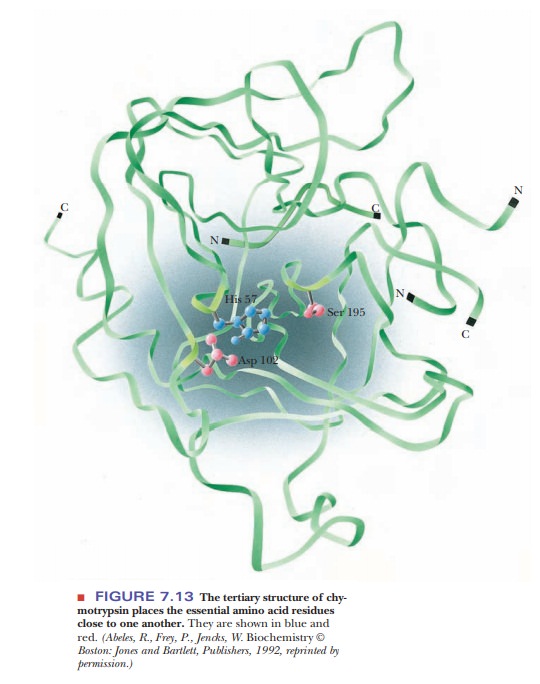 Other important pieces of information about the three-dimensional structure of the active site emerge when a complex is formed between chymotrypsin and a substrate analogue. When one such substrate analog, formyl-L-tryptophan, is bound to the enzyme, the tryptophan side chain fits into a hydrophobic pocket near serine 195. This type of binding is not surprising, in view of the specificity of the enzyme for aromatic amino acid residues at the cleavage site.

The results of X-ray crystallography show, in addition to the binding site for aromatic amino acid side chains of substrate molecules, a definite arrange-ment of the amino acid side chains that are responsible for the catalytic activity of the enzyme. The residues involved in this arrangement are serine 195 and histidine 57. 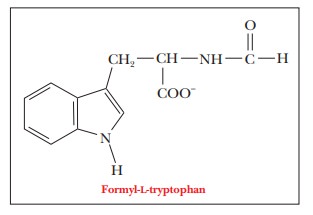 How do the critical amino acids catalyze the chymotrypsin reaction?

Any postulated reaction mechanism must be modified or discarded if it is not consistent with experimental results.

The critical amino acid residues, serine 195 and histidine 57, are involved in the mechanism of catalytic action. In the terminology of organic chemis-try, the oxygen of the serine side chain is a nucleophile, or nucleus-seeking substance. A nucleophile tends to bond to sites of positive charge or polariza-tion (electron-poor sites), in contrast to an electrophile, or electron-seeking substance, which tends to bond to sites of negative charge or polarization (electron-rich sites). The nucleophilic oxygen of the serine attacks the carbonyl carbon of the peptide group. The carbon now has four single bonds, and a tetrahedral intermediate is formed; the original -C=O bond becomes a single bond, and the carbonyl oxygen becomes an oxyanion. The acyl-enzyme inter-mediate is formed from the tetrahedral species (Figure 7.14). The histidine and the amino portion of the original peptide group are involved in this part of the reaction as the amino group hydrogen bonds to the imidazole portion of the histidine. 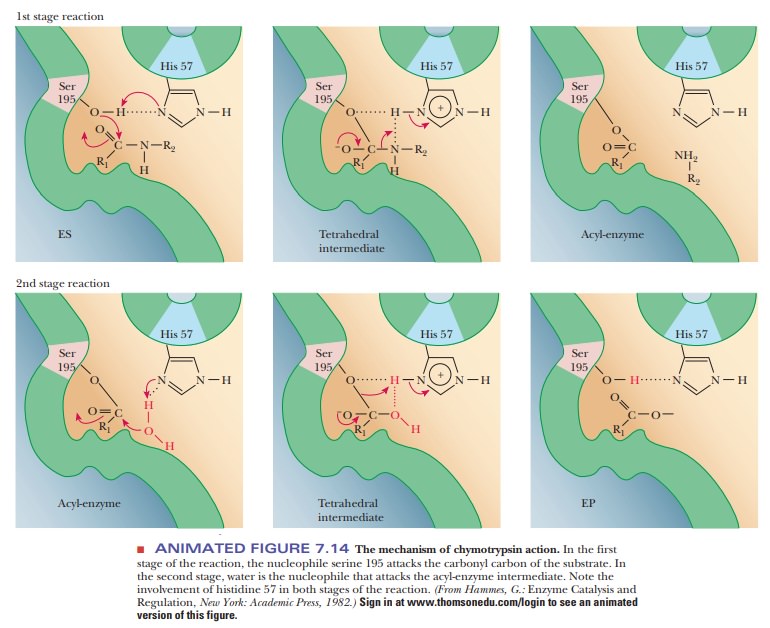 Note that the imidazole is already protonated and that the proton came from the hydroxyl group of the serine. The histidine behaves as a base in abstracting the proton from the serine; in the terminology of the physical organic chemist, the histidine acts as a general base catalyst. The carbon–nitrogen bond of the original peptide group breaks, leaving the acyl-enzyme intermediate. The proton abstracted by the histidine has been donated to the leaving amino group. In donating the proton, the histi-dine has acted as an acid in the breakdown of the tetrahedral intermediate, although it acted as a base in its formation.

In the deacylation phase of the reaction, the last two steps are reversed, with water acting as the attacking nucleophile. In this second phase, the water is hydrogen-bonded to the histidine. The oxygen of water now performs the nucleophilic attack on the acyl carbon that came from the original peptide group. Once again, a tetrahedral intermediate is formed. In the final step of the reaction, the bond between the serine oxygen and the carbonyl carbon breaks, releasing the product with a carboxyl group where the original peptide group used to be and regenerating the original enzyme. Note that the serine is hydrogen-bonded to the histidine. This hydrogen bond increases the nucleo-philicity of the serine, whereas in the second part of the reaction, the hydrogen bond between the water and the histidine increased the nucleophilicity of the water.

The mechanism of chymotrypsin action is particularly well studied and, in many respects, typical. Numerous types of reaction mechanisms for enzyme action are known, and we shall discuss them in the contexts of the reactions catalyzed by the enzymes in question. To lay the groundwork, it is useful to discuss some general types of catalytic mechanisms and how they affect the specificity of enzymatic reactions.

The unique orientation of the amino acids in the active site promote the catalysis of a chemical reaction.

To understand the catalytic mechanism, the critical amino acids in the active site must be determined. Labeling reagents are often used for this purpose.

Histidine 57 and serine 195 play the most important roles in the mecha-nism of chymotrypsin action.