Billions of gallons of toxic wastes are dumped into the environment every year.

Billions of gallons of toxic wastes are dumped into the environment every year. Between the damage caused by our industrial lifestyles and the rampant growth in world population, many scientists have predicted that the Earth is headed for a global environmental collapse. In response, science and industry are both working on ways to reduce and limit the toxicity of compounds produced by industrial syntheses. This has led to the new field of greenchemistry, in which alternative, less toxic compounds are slowlyreplacing their more toxic predecessors.

Nature has some detoxification systems of its own, often including hydrogen peroxide and oxygen. These two substances working together are capable of purifying water and cleansing industrial waste. However, in nature such reactions require an enzyme, such as peroxidase, to increase the rate of reaction to a significant level. Current research has come up with some synthetic molecules that possess an enzyme’s ability to catalyze a needed reaction. One important set of these molecule are called TAMLs (tetra-amido macrocyclic ligands). The heart of the mol-ecule is an iron atom linked to four nitrogen atoms, as shown in the figure and the two remaining coordination sites are bound to water ligands. Attached to this central unit are carbon rings called the macrocycle. Just as the iron in hemoglobin is reactive and can bind to oxygen, the TAML takes advantage of similar properties. In this case, it reacts with H2O2 to displace a water ligand. The H2O2 then expels another water molecule, leaving a very reactive species with a large charge separation between the iron centerand the anionic oxygen at the ligand site. This final molecule is powerful enough to react with and destroy many chemical tox-ins. By adjusting the components of the TAML, researchers can tailor them for specific toxins, including versions that were able to deactivate more than 99% of spores of Bacillus atrophaeus, a bacterial species similar to anthrax. They have also been used to decolorize waste from pulp mills. The researchers working with TAMLs hope to design them to attack other infectious diseases and environmental pollutants. 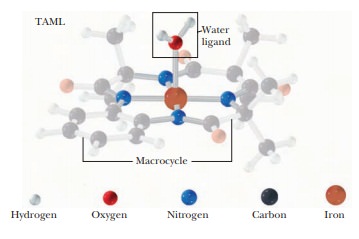