The Concerted and Sequential Models for Allosteric Enzymes 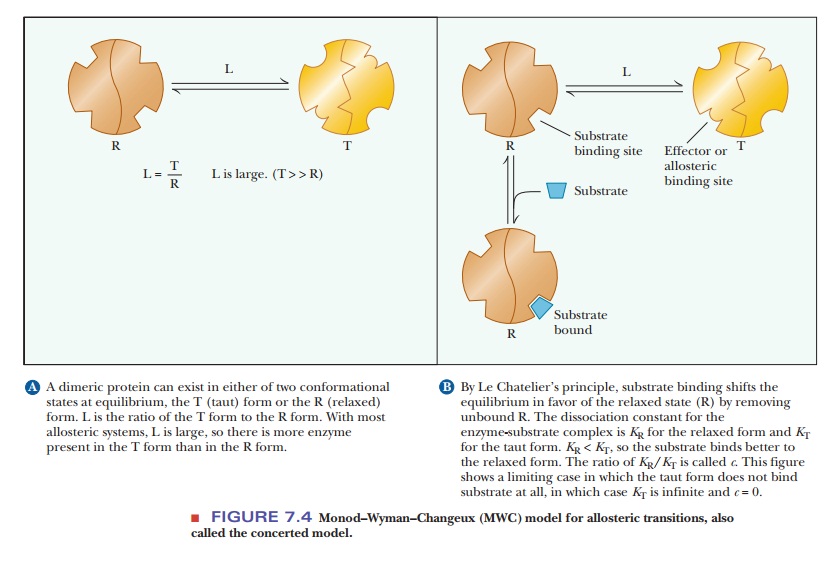 The Concerted and Sequential Models for Allosteric Enzymes

The two principal models for the behavior of allosteric enzymes are the concerted model and the sequential model. They were proposed in 1965 and 1966, respectively, and both are currently used as a basis for interpreting experimental results. The concerted model has the advantage of comparative simplicity, and it describes the behavior of some enzyme systems very well.

The sequential model sacrifices a certain amount of simplicity for a more realistic picture of the structure and behavior of proteins; it also deals very well with the behavior of some enzyme systems.

What is the concerted model for allosteric behavior?

In 1965, Jacques Monod, Jeffries Wyman, and Jean-Pierre Changeux proposed the concerted model for the behavior of allosteric proteins in a paper that has become a classic in the biochemical literature. In this picture, the protein has two conformations, the active R (relaxed) conformation, which binds substrate tightly, and the inactive T (tight, also called taut) conformation, which binds substrate less tightly. The distinguishing feature of this model is that the conformations of all subunits change simultaneously. Figure 7.4a shows a hypothetical protein with two subunits. Both subunits change conformation from the inactive T conformation to the active R conformation at the same time; that is, a concerted change of conformation occurs. The equilibrium ratio of the T/R forms is called L and is assumed to be high-that is, more enzyme is present in the unbound T form than in the unbound R form. The binding of substrate to either form can be described by the dissociation constant of the enzyme and substrate, K, with the affinity for substrate higher in the R form than in the T form. Thus, KR<<KT. The ratio of KR/KT is called c. Figure 7.4b shows a limiting case in which KTis infinitely greater than KR(c = 0). In other words, substrate will not bindto the T form at all. The allosteric effect is explained by this model based on perturbing the equilibrium between the T and R forms. Although initially the amount of enzyme in the R form is small, when substrate binds to the R form, it removes free R form. This causes the production of more R form to reestablish the equilibrium, which makes binding more substrate possible. This shifting of the equilibrium is responsible for the observed allosteric effects. The Monod–Wyman–Changeux model has been shown mathematically to explain the sigmoidal effects seen with allosteric enzymes. The shape of the curve will be based on the L and c values. As L increases (free T form more highly favored), the shape becomes more sigmoidal (Figure 7.5). As the value for c decreases (higher affinity between substrate and R form), the shape also becomes more sigmoidal. 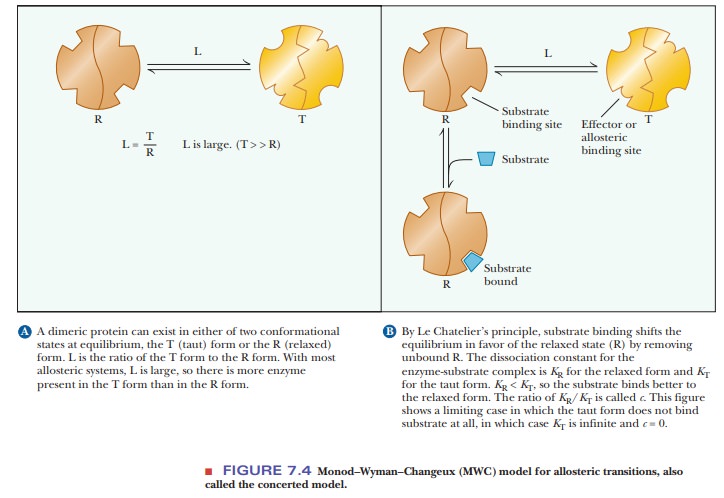 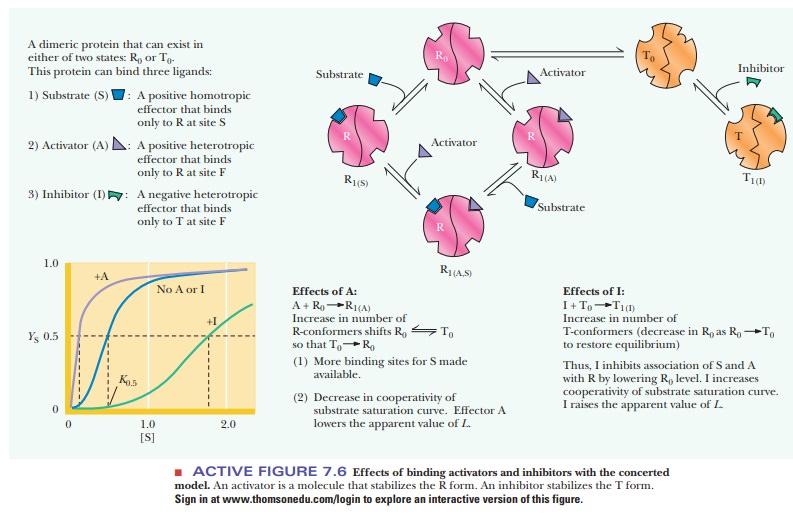 When an inhibitor, I, is present, the cooperative binding of I also shifts the equilibrium between the T and R forms, but this time the T form is favored (Figure 7.6). More substrate is needed to shift the T-to-R equilibrium in favor of the R form. A greater degree of cooperativity is seen in the binding of S.

What is the sequential model for allosteric behavior? 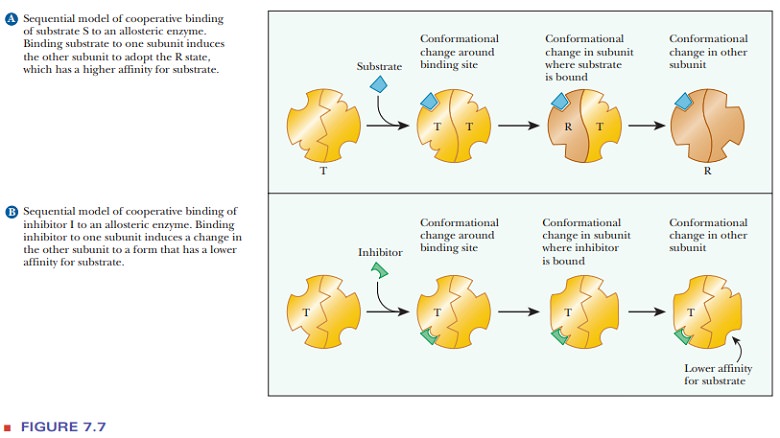 The sequential model for binding effectors of all types, including substrates, to allosteric enzymes has a unique feature not seen in the concerted model. The conformational changes thus induced can make the enzyme less likely to bind more molecules of the same type. This phenomenon, called negativecooperativity, has been observed in a few enzymes. One is tyrosyl tRNA synthe-tase, which plays a role in protein synthesis. In the reaction catalyzed by this enzyme, the amino acid tyrosine forms a covalent bond to a molecule of trans-fer RNA (tRNA). In subsequent steps, the tyrosine is passed along to its place in the sequence of the growing protein. The tyrosyl tRNA synthetase consists of two subunits. Binding of the first molecule of substrate to one of the subunits inhibits binding of a second molecule to the other subunit.

The sequential model has successfully accounted for the negative coopera-tivity observed in the behavior of tyrosyl tRNA synthetase. The concerted model makes no provision for negative cooperativity.

The two principal models for allosteric enzyme behavior are called the concerted model and the sequential model.

In the concerted model, the enzyme is thought of as being in a taut form, T, or a relaxed form, R. All subunits are found in one or the other, and an equilibrium exists between the T and R forms.

In the sequential model, subunits of the enzyme can change sequentially from the T form to the R form and back again.