The Behavior of Allosteric Enzymes

How are allosteric enzymes controlled?

The Behavior of Allosteric Enzymes

The behavior of many well-known enzymes can be described quite adequately by the Michaelis–Menten model, but allosteric enzymes behave very differently. We saw similarities between the reaction kinetics of an enzyme such as chymotrypsin, which does not display allosteric behavior, and the binding of oxygen by myoglobin, which is also an example of nonallosteric behavior. The analogy extends to show the similarity in the kinetic behavior of an allosteric enzyme such as aspartate transcarbamoylase (ATCase) and the binding of oxygen by hemoglobin. Both ATCase and hemoglobin are allosteric proteins; the behaviors of both exhibit cooperative effects caused by subtle changes in quaternary structure. (Recall that quaternary structure is the arrangement in space that results from the interaction of subunits through noncovalent forces, and that positive cooperativity refers to the fact that the binding of low levels of substrate facilitates the action of the protein at higher levels of substrate, whether the action is catalytic or some other kind of binding.) In addition to displaying cooperative kinetics, allosteric enzymes have a different response to the presence of inhibitors from that of nonallosteric enzymes.

How are allosteric enzymes controlled?

ATCase catalyzes the first step in a series of reactions in which the end product is cytidine triphosphate (CTP), a nucleoside triphosphate needed to make RNA and DNA. The pathways that produce nucleotides are energetically costly and involve many steps. The reaction catalyzed by aspartate transcarbamoylase is a good example of how such a pathway is controlled to avoid overproduction of such compounds. For DNA and RNA synthesis, the levels of several nucleotide triphosphates are controlled. CTP is an inhibitor of ATCase, the enzyme that catalyzes the first reaction in the pathway. This behaviour is an example of feedback inhibition (also called end-product inhibition), in  which the end product of the sequence of reactions inhibits the first reaction in the series (Figure 7.1). Feedback inhibition is an efficient control mechanism  because the entire series of reactions can be shut down when an excess of the final product exists, thus preventing the accumulation of intermediates in the pathway. Feedback inhibition is a general feature of metabolism and is not confined to allosteric enzymes. However, the observed kinetics of the ATCase reaction, including the mode of inhibition, are typical of allosteric enzymes. 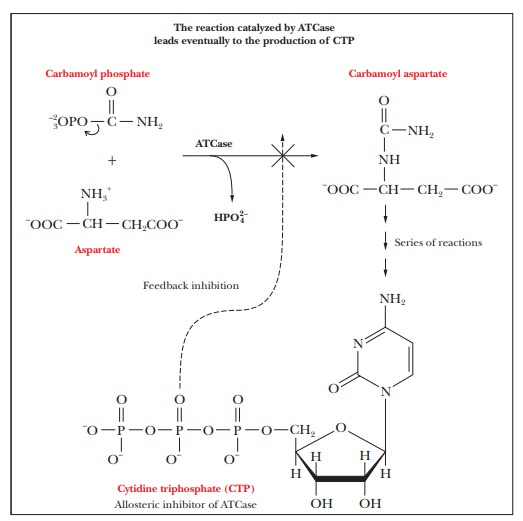 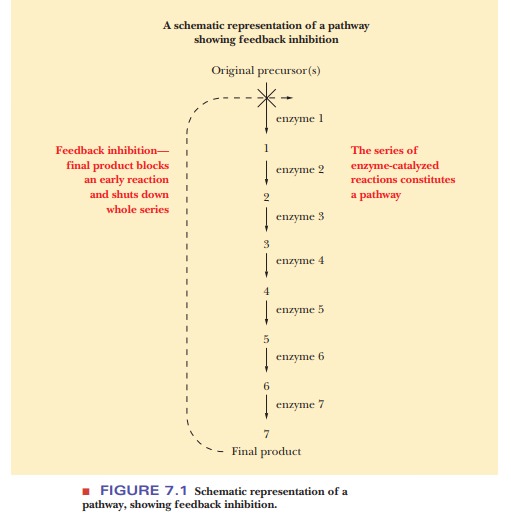 When ATCase catalyzes the condensation of aspartate and carbamoyl phosphate to form carbamoyl aspartate, the graphical representation of the rate as a function of increasing substrate concentration (aspartate) is a sigmoidal curve rather than the hyperbola obtained with nonallosteric enzymes (Figure 7.2a). The sigmoidal curve indicates the cooperative behavior of allosteric enzymes. In this two-substrate reaction, aspartate is the substrate for which the concentration is varied, while the concentration of carbamoyl phosphate is kept constant at high levels. 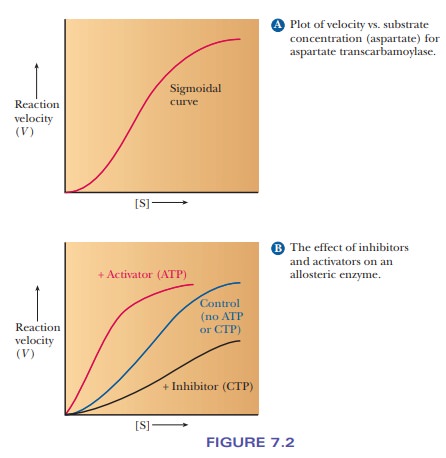 Figure 7.2b compares the rate of the uninhibited reaction of ATCase with the reaction rate in the presence of CTP. In the latter case, a sigmoidal curve still describes the rate behavior of the enzyme, but the curve is shifted to higher substrate levels; a higher concentration of aspartate is needed for the enzyme to achieve the same rate of reaction. At high substrate concentrations, the same maximal rate, Vmax, is observed in the presence and absence of inhibitor. Because in the Michaelis–Menten scheme Vmax changes when a reaction takes place in the presence of a noncompetitive inhib-itor, noncompetitive inhibition cannot be the case here. The same Michaelis– Menten model associates this sort of behavior with competitive inhibition, but that part of the model still does not provide a reasonable picture. Competitive inhibitors bind to the same site as the substrate because they are very similar in structure. The CTP molecule is very different in structure from the substrate, aspartate, and it is bound to a different site on the ATCase molecule. ATCase is made up of two different types of subunits. One of them is the catalytic subunit, which consists of six protein subunits organized into two trimers. The other is the regulatory subunit, which also consists of six protein subunits organized into three dimers (Figure 7.3). The catalytic subunits can be separated from the regulatory subunits by treatment with p-hydroxymercuribenzoate, which reacts with the cysteines in the protein. When so treated, ATCase still catalyzes the reaction, but it loses its allosteric control by CTP, and the curve becomes hyperbolic. 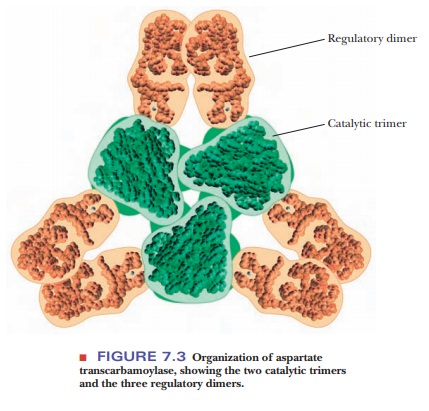 The situation becomes “curiouser and curiouser” when the ATCase reaction takes place not in the presence of CTP, a pyrimidine nucleoside triphosphate, but in the presence of adenosine triphosphate (ATP), a purine nucleoside tri-phosphate. The structural similarities between CTP and ATP are apparent, but ATP is not a product of the pathway that includes the reaction of ATCase and that produces CTP. Both ATP and CTP are needed for the synthesis of RNA and DNA. The relative proportions of ATP and CTP are specified by the needs of the organism. If there is not enough CTP relative to the amount of ATP, the enzyme requires a signal to produce more.

In the presence of ATP, the rate of the enzymatic reaction is increased at lower levels of aspartate, and the shape of the rate curve becomes less sigmoidal and more hyperbolic (Figure 7.2b). In other words, there is less cooperativity in the reaction. The binding site for ATP on the enzyme molecule is the same as that for CTP (which is not surpris-ing in view of their structural similarity), but ATP is an activator rather than an inhibitor like CTP. When CTP is in short supply in an organism, the ATCase reaction is not inhibited, and the binding of ATP increases the activity of the enzyme still more. 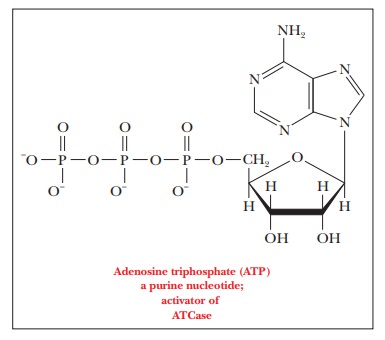 Even though it is tempting to consider inhibition of allosteric enzymes in the same fashion as nonallosteric enzymes, much of the terminology is not appro-priate. Competitive inhibition and noncompetitive inhibition are terms reserved for the enzymes that behave in line with Michaelis–Menten kinetics. With allosteric enzymes, the situation is more complex. In general, two types of enzyme sys-tems exist, called K systems and V systems. A K system is an enzyme for which the substrate concentration that yields one-half Vmax is altered by the presence of inhibitors or activators. ATCase is an example of a K system. Because we are not dealing with a Michaelis–Menten type of enzyme, the term KM is not appli-cable. For an allosteric enzyme, the substrate level at one-half Vmax is called the K0.5. In a V system, the effect of inhibitors and activators changes theVmax, butnot the K0.5.

A plot of velocity versus [S] for an allosteric enzyme has a sigmoidal shape.

One type of control often seen with allosteric enzymes is called feedback inhibition.

Inhibitors and activators can control the activity of an allosteric enzyme.