What are the most common types of reactions?

The overall mechanism for a reaction may be fairly complex, as we have seen in the case of chymotrypsin, but the individual parts of a complex mechanism can themselves be fairly simple. Concepts such as nucleophilic attack and acid catalysis commonly enter into discussions of enzymatic reactions. We can draw quite a few general conclusions from these two general descriptions.

What are the most common types of reactions?

Nucleophilic substitution reactions play a large role in the study of organicchemistry, and they are excellent illustrations of the importance of kinetic measurements in determining the mechanism of a reaction. A nucleophile is an electron-rich atom that attacks an electron-deficient atom. A general equation for this type of reaction is

where :Z is the nucleophile and X is called a leaving group. In biochemistry, the carbon of a carbonyl group (C=O) is often the atom attacked by the nucleophile. Common nucleophiles are the oxygens of serine, threonine, and tyrosine. If the rate of the reaction shown here is found to depend solely on the concentration of the R:X, then the nucleophilic reaction is called an SN1 (substitution nucleophilic unimolecular). Such a mechanism would mean that the slow part of the reaction is the breaking of the bond between R and X, and that the addition of the nucleophile Z happens very quickly compared to that. An SN1 reaction follows first-order kinetics. If the nucleophile attacks the R:X while the X is still attached, then both the concentration of R:X and the concentration of :Z will be important. This reaction will follow second-order kinetics and is called an SN2 reaction (substitution nucleophilic bimolecular). The difference between SN1 and SN2 is very important to biochemists because it explains much about the stereospecificity of the products formed. An SN1 reaction often leads to loss of stereospecificity. Because the leaving group is gone before the attacking group enters, the attacking group can often end up in one of two orientations, although the specificity of the active site can also limit this. With an SN2 reaction, the fact that the leaving group is still attached forces the nucleophile to attack from a particular side of the bond, leading to only one possible stereospecificity in the product. The chymotrypsin nucleophilic attacks were examples of SN2 reactions, although no stereochemistry is noted because the carbonyl that was attacked became a carbonyl group again at the end of the reaction and was, therefore, not chiral.

To discuss acid–base catalysis, it is helpful to recall the definitions of acids and bases. In the Brønsted–Lowry definition, an acid is a proton donor and a base is a proton acceptor. The concept of general acid–base catalysis depends on donation and acceptance of protons by groups such as the imidazole, hydroxyl, carboxyl, sulfhydryl, amino, and phenolic side chains of amino acids; all these functional groups can act as acids or bases. The donation and accep-tance of protons gives rise to the bond breaking and re-formation that consti-tute the enzymatic reaction.

If the enzyme mechanism involves an amino acid donating a hydrogen ion, as in the reaction

then that part of the mechanism would be called general acid catalysis. If an amino acid takes a hydrogen ion from one of the substrates, such as in the reaction

then that part is called general base catalysis. Histidine is an amino acid that often takes part in both reactions, because it has a reactive hydrogen on the imidazole side chain that dissociates near physiological pH. In the chymotrypsin mechanism, we saw both acid and base catalysis by histidine

A second form of acid–base catalysis reflects another, more general defini-tion of acids and bases. In the Lewis formulation, an acid is an electron-pair acceptor, and a base is an electron-pair donor. Metal ions, including such biologically important ones as Mn2+, Mg2+, and Zn2+, are Lewis acids. Thus, they can play a role in metal–ion catalysis (also called Lewis acid–base cataly-sis). The involvement of Zn2+ in the enzymatic activity of carboxypeptidase A is an example of this type of behavior. This enzyme catalyzes the hydrolysis of C terminal peptide bonds of proteins. The Zn(II), which is required for the activity of the enzyme, is complexed to the imidazole side chains of histidines 69 and 196 and to the carboxylate side chain of glutamate 72. The zinc ion is also complexed to the substrate. 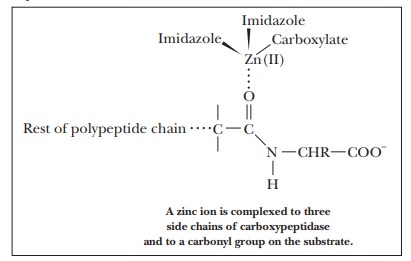 The type of binding involved in the complex is similar to the binding that links iron to the large ring involved in the heme group. Binding the substrate to the zinc ion polarizes the carbonyl group, making it susceptible to attack by water and allowing the hydrolysis to proceed more rapidly than it does in the uncatalyzed reaction.

A definite connection exists between the concepts of acids and bases and the idea of nucleophiles and their complementary substances, electrophiles. A Lewis acid is an electrophile, and a Lewis base is a nucleophile. Catalysis by enzymes, including their remarkable specificity, is based on these well-known chemical principles operating in a complex environment.

The nature of the active site plays a particularly important role in the speci-ficity of enzymes. An enzyme that displays absolute specificity, catalyzing the reac-tion of one, and only one, substrate to a particular product, is likely to have a fairly rigid active site that is best described by the lock-and-key model of sub-strate binding. 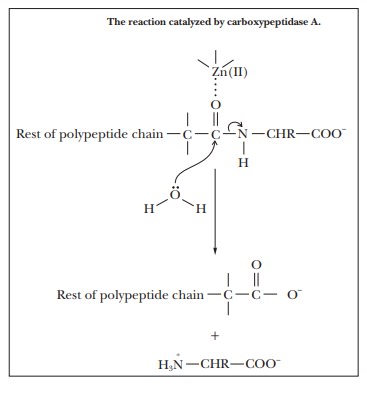 The many enzymes that display relative specificity, catalyzing the reactions of structurally related substrates to related products, apparently have more flexibility in their active sites and are better characterized by the induced-fit model of enzyme–substrate binding; chymotrypsin is a good example. Finally, there are stereospecific enzymes with specificity in which optical activity plays a role. The binding site itself must be asymmetric in this situation (Figure 7.15). If the enzyme is to bind specifically to an optically active substrate, the binding site must have the shape of the substrate and not its mirror image. There are even enzymes that introduce a center of optical activity into the product. The substrate itself is not optically active in this case. There is only one product, which is one of two possible isomers, not a mixture of optical isomers. 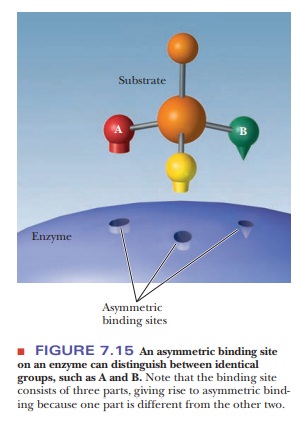 One of the most common is a nucleophilic substitution reaction, of which there are two principal types-SN1 and SN2.

Other common reactions are general acid–base catalysis and metal–ion catalysis.