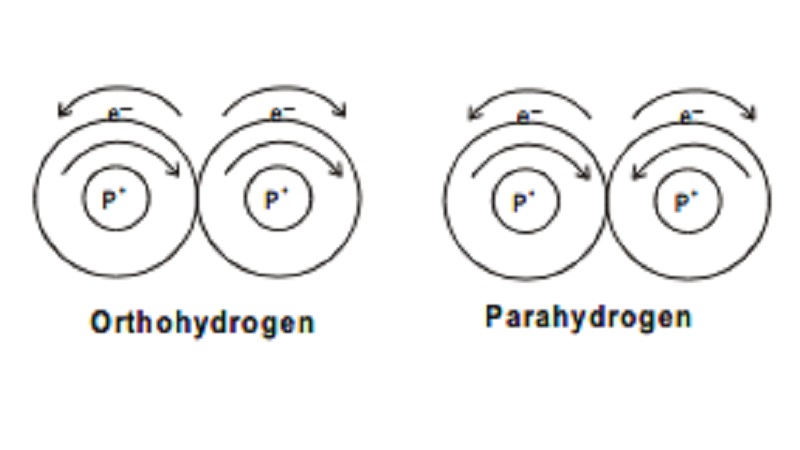 The nucleus of the hydrogen atom spins about an axis like a top. When two hydrogen atoms combine, they form molecular hydrogen. Thus depending on the direction of the two protons in the nucleus the following two types of hydrogen molecules are known.

The nucleus of the hydrogen atom spins about an axis like a top. When two hydrogen atoms combine, they form molecular hydrogen.

At room temperature ordinary hydrogen consists of about 75% ortho and 25% para form. As the temperature is lowered, the equilibrium shifts in favour of para hydrogen. At 25K. There is 99% para and 1% ortho hydrogen. The change in the proportion of the two forms of hydrogen requires a catalyst such as platinum or atomic hydrogen or silent electric discharge.

Conversion of para into ortho hydrogen

Ortho hydrogen is more stable than para hydrogen. The para form is transformed into ortho form by the following methods.

2.    By passing an electric discharge

5.    By mixing with nascent hydrogen or atomic hydrogen.

(iii) The vapour pressure of liquid para hydrogen is higher than that of ordinary liquid hydrogen.

The magnetic moment of para hydrogen is zero since the spins neutralise each other while in the case of ortho , it is twice than that of a proton.