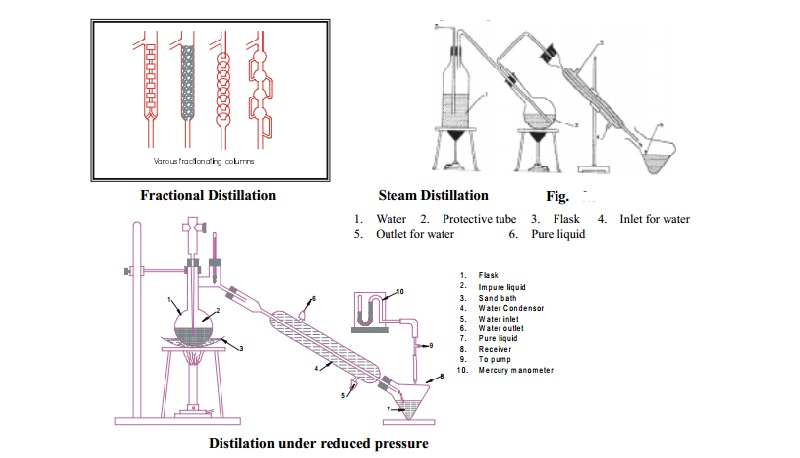 Liquids with boiling points widely apart (about 40K and above) can be purified by simple distillation if they do not decompose under ordinary pressure. Simple distillation involves conversion of a liquid into its vapour by heating in a distilling flask and then condensation of the vapour into a liquid in the receiver.

Mixtures like the following can be separated by this simple distillation.

This method is applicable for the separation and purification of a mixture of two or more miscible liquids whose boiling points lie very close to each other.

This is similar to the ordinary distillation method with the only exception that a fractionating column is introduced in-between the distillation flask and the condenser. 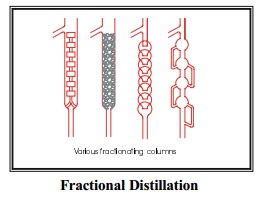 The process of separation of the components in a liquid mixture at their respective boiling points in the form of vapours and the subsequent condensation of those vapours is called fractional distillation.

The fractionating columns used for the purpose are of different shapes.

1.     It should not decompose at the steam temperature.

4.     The impurities present should be non-volatile 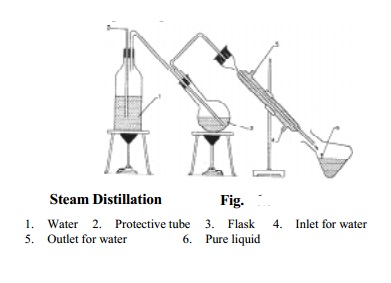 The apparatus used for steam distillation is shown in the figure (16.5). The impure compound is taken in the round bottomed flask and a small quantity of water is added. The flask is then heated gently. Now steam is bubbled through the contents in the flask. The vapours of the compound mix up with steam and escape into the condenser. The condensate thus obtained is a mixture of water and the organic compound which can be separated.

This temperature must be lower than the normal boiling point of water or the organic liquid. The reason that p1 + p2 becomes equal to the atmospheric pressure must earlier than p1 or p2 alone. Thus in steam distillation, the impure liquid boils at a temperature which is lower than its normal boiling point. Hence, steam distillation serves the same purpose as distillation under reduced pressure. However, the former is cheaper but less useful than the latter.

This technique is used for purifying or separating thermally unstable liquid compounds which decompose at their normal boiling points.

Principle : Lowering of pressure on the surface of a liquid lowers its boiling point. As a result, a liquid can be boiled and distilled at a temperature much below the normal boiling point without any decomposition.

Procedure : Distillation under reduced pressure or vacuum is carried out in a specially designed glass apparatus as shown in (Fig.). 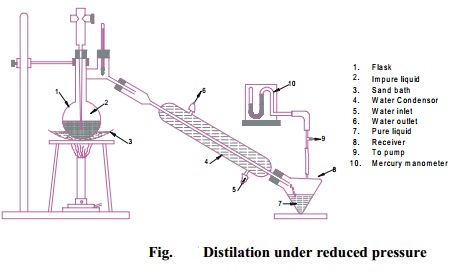 The receiver is attached to a vacuum pump to reduce pressure. The pressure is measured with the help of a manometer.

Advantages of distillation under reduced pressure

Distillation under reduced pressure has the following advantages:

This method is based on the fact that organic substances are more soluble in organic solvents than in water.

The organic substance is extracted from its aqueous solution adopting the following procedure.

1.     The aqueous solution containing organic substance is shaken with a suitable organic solvent which dissolves the substance but is immiscible with water. Two layers are formed; the organic layer and aqueous layer.

The organic solvent is removed by distillation to obtain the organic substance.