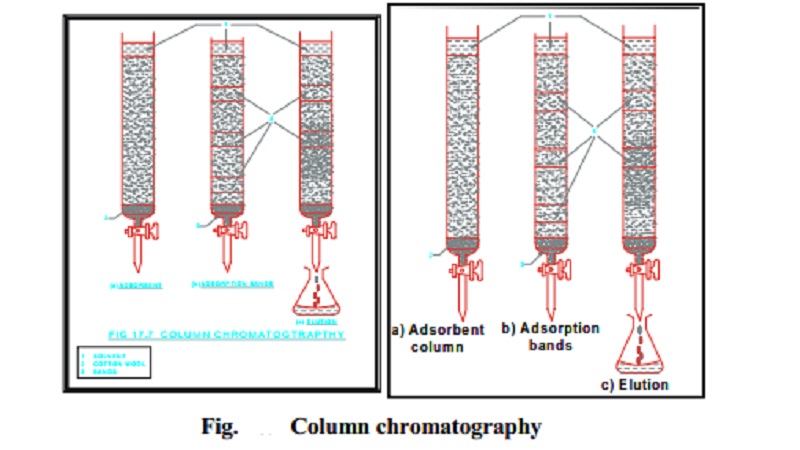 This technique was introduced by M.S.Tswett, a Russian botanist in 1906 when he reported the separation of different coloured constituents of chlorophyll. He achieved it by passing a petroleum ether solution of the chlorophyll present in leaves through a column of calcium carbonate firmly packed into a narrow glass tube. Different components of the pigment got separated into band or zones of different colours.

The simplest chromatographic method is column chromatography. It is carried out in a long glass column having a stop-cock near the bottom. To start the operation, a plug of cotton or glass wool is placed at the bottom of the column to support the adsorbent powder. The tube is packed uniformly with suitable adsorbent. This constitutes what is known as the stationary phase. The commonly employed adsorbents are activated aluminium oxide (alumina), magnesium oxide, silica gel and starch. A loose plug of cotton or glass wool is then placed at the top of the adsorbent column.

Thin layer chromatography (TLC) is another type of adsorption chromatography, which involves separation of the substances of a mixture over a thin layer of an adsorbent. A thin layer (about 0.2mm thick) of an adsorbent (Silica gel or alumina) is spread over a glass plate of suitable size. The plate is known as thin layer chromatography plate. The solution of the mixture to be separated is applied as a small spot about 2 cm above one end of the TLC plate. The glass plate is then placed in a closed jar containing the solvent (Below 2cm height). As the solvent jar moves up the plate, the components of mixture move up along the plate to different distances depending on this degree of adsorption and separation takes place. The relative adsorption of each component of the mixture is expressed in terms of its retention factor ie., Rf Value.

It is an important and useful class of partition chromatography. In this technique, the stationary phase is considered to be made up of water molecules bound to the cellulose network (inert support) of the paper. The mobile phase, known as the developing solvent consists of either one solvent or a mixture of different solvents. Separation of the mixture into pure compounds takes place by the partitioning of different compounds

between these two liquid phases. The mobile phase travels by capillary action through the paper. Depending upon the way the solvent travels on the paper, there are three types of paper chromatography.

1.     Ascending Paper Chromatography : The mobile phase moves upwards on the paper strip in this case.

2.     Descending Paper Chromatography : The mobile phase in this case moves downward on the paper strip.

3.     Circular or radial paper chromatography: The mobile phase moves horizontally along a circular sheet of paper in this case.

In the ascending paper chromatography, the mixture of compounds is applied on the paper as a spot little above the lower end and then this end is dipped in the solvent. When the solvent has risen more than two third length of the paper, then it is removed from the solvent. The paper is dried and is known as chromatogram.

(i)  Separation based on partition

(ii) Stationary phase is the water molecules bound on the paper.

(i)  Separation is based on partition, adsorption and ion exchange.

(ii) Stationary phase is a layer of silica gel or alumina on glass plate.