The effects of vibration are discussed. Different types of dynamic loads that are encountered in nature are listed. The differences between static and dynamic problem are illustrated. Modelling of structures subjected to dynamic loads is discussed.

Abstract: The effects of vibration are discussed. Different types of dynamic loads that are encountered in nature are listed. The differences between static and dynamic problem are illustrated. Modelling of structures subjected to dynamic loads is discussed.

This text is concerned with the analysis of structures subjected to dynamic loads. Dynamics in this context means time varying. Both application of load and removal of load necessarily vary with time. Hence, the internal stresses and the resulting deflections are also time dependent or dynamic in nature.

In the real world, no loads that are applied to a structure are truly static. All bodies possessing mass and elasticity are capable of vibration. Thus most engineering machines and structures experience vibration to some degree and their design generally requires consideration of oscillatory behaviour.

The effects of vibration are very common in our daily life. We live on the beating of our hearts. Planetary motion is also another example of vibration. These motions are called periodic motions (periodic motion is a motion that repeats itself regularly after a certain interval of time). This interval of time is known as the period of the system or motion. In general, vibration has both good and bad effects. In civil engineering, the good effect of vibration is harnessed by the compaction of fresh concrete. The bad effects of vibrations on a structure are those produced by natural forces such as wind gusts, and earthquakes and by mechanical forces on a bridge.

Oscillatory systems can be broadly characterized as linear or nonlinear. In general, for linear systems, the principle of superposition is valid, and the mathematical techniques available are well developed. Techniques for the analysis of nonlinear systems are less well known and difficult to apply, since changes in stiffness and damping characteristics occur during nonlinear inelastic response.

In general, vibration can be classified as free vibration and forced vibration. Free vibration takes place when a system oscillates under the actions of forces inherent in the system itself and external forces are absent. The system under free vibration will vibrate at one or more of its natural frequencies, which are properties of the dynamics system.

Vibration that takes place under the excitation of external forces is called forced vibration. If the frequency of excitation coincides with one of the natural frequencies of the system, a condition of resonance occurs, resulting in large oscillations in structures, which ultimately results in the failure of the structure.

Difference between dynamic and static problems

In two aspects, a dynamic problem is different from a static problem. The first and most obvious difference is the time-varying load and the response is also time varying. This needs analysis over a specific interval of time. Hence dynamic analysis is complex and computationally extensive and expensive compared with static analysis. The other difference between dynamic and static problems is the major occurrence of inertia forces when the loading is dynamically applied. Consider a water tank as shown in Fig. 1.2a subjected to load F at the top. The resulting deflection, shear force and bending moment can be calculated on the basis of static structural analysis principles. On the other hand, if the time-varying load F(t) is applied at the top, the structure is 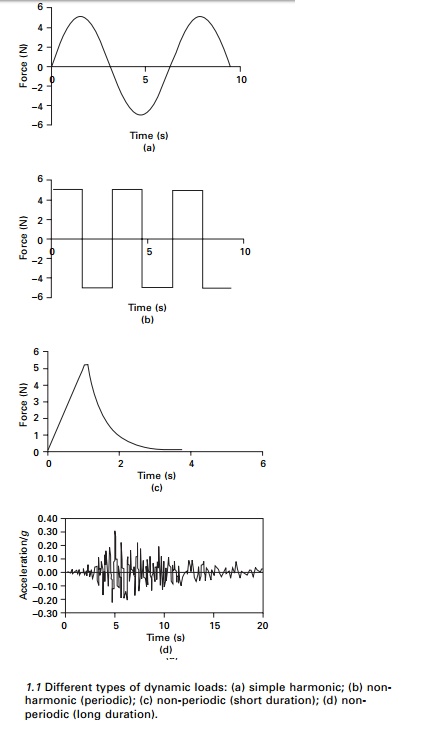 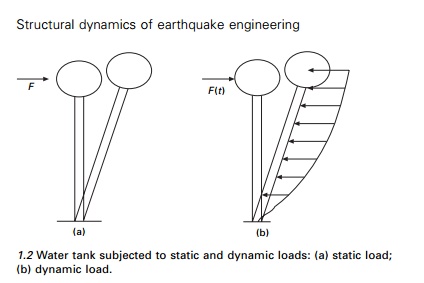 A physical problem based on certain assumptions is idealized into a mechanical model by correctly defining in terms of geometry, kinematics and loading and boundary conditions. The governing differential equations are solved to obtain the dynamic response and the results are interpreted in a meaningful manner. For complex structures, it may be necessary to refine the analysis by considering a more detailed mechanical model. In a mechanical model, infinite degrees of freedom are converted to finite degrees of freedom, and for each degree of freedom, exhibiting the structure, there exists a natural frequency at which the structure vibrates in a particular mode of vibration. A mechanical model can also be categorized as either continuous or discrete. Consider a chimney as shown in Fig. 1.3a. In a real structure, the structure manifests distributed mass and stiffness characteristics along the height. The continuous model is shown in Fig. 1.3b. Hence the mathematical continuous model incorporates distributed mass and distributed stiffness to arrive at the response of the system. The displacement v is a function of space and time. On the other hand, we can place the whole mass at the top of the chimney as shown Fig. 1.3c and can consider single-degree-of-freedom (SDOF) in which entire mass m of the structure is localized (lumped) at the top of the structure has constant stiffness k. The independent displacement V(t) is a function of time alone. The lumped mass representation shown in Fig. 1.3d is a three-degrees 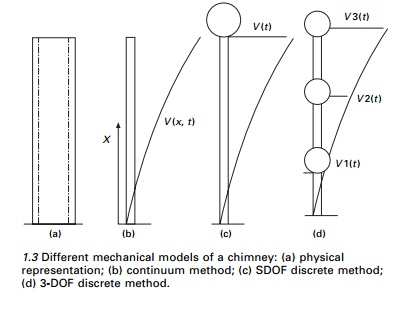 of-freedom system in which each localized mass m1, m2, m3 has its own displacements V1(t), V2(t), V3(t) respectively. Practical dynamic analysis of large complicated multiple-degrees-of-freedom (MDOF) is generally accomplished by computer-implemented numerical analysis techniques such as the finite element method.

Vibration can occur in a structure by imposing initial conditions, which generally manifest themselves as energy input. If the initial input is imparting velocity to the system, kinetic energy is produced. If the displacement is imparted to the system, potential energy is produced. If the structural vibration occurs in the absence of external loads, it is termed free vibration. Free vibration usually occurs at the fundamental natural frequency. Owing to damping present in the system, the free vibration eventually dampens out. If the vibration takes place under the excitation of external force, it is called forced vibration. If the source of vibration is periodic, the resulting vibration may constitute both steady state and transient. Steady state response transpires at the frequency of excitation. The transient response is due to the initial energy stored in the structure. A transient response may also occur if the structure is subjected to blast loads.