Hybridization is the concept of intermixing of the orbitals of an atom having nearlythesameenergytogiveexactlyequivalentorbitalswithsameenergy,identical shapes and symmetrical orientations in space.

Hybridization is the concept of intermixing of the orbitals of an atom having nearlythesameenergytogiveexactlyequivalentorbitalswithsameenergy,identical shapes and symmetrical orientations in space.

The new equivalent orbitals formed are known as the hybrid orbitals or hybridized orbitals. Hybrid orbitals have properties entirely different from the

properties of the original orbitals from which they have been obtained.

1.           Orbitals involved in hybridization should have nearly the same energy.

2.           The orbitals of one and the same atom participate in hybridization.

5.           A hybrid orbital which is taking part in bond formation must contain one electron in it.

6.           Due to the electronic repulsions between the hybrid orbitals, they tend to remain at the maximum distance apart.

Step 1 : Add the number of valence electrons of all the atoms present in the given molecule/ion.

Step 3 : (i) If the result obtained in step 2 is less than 8, divide it by 2 and find the sum of the quotient and remainder.

second quotient (Q2). Add all the quotients and the final remainder (R2).

Let the final result obtained in (i) or (ii) be X. The type of hybridisation is decided by the value of X as follows :

Value of X  : Type of hybridization 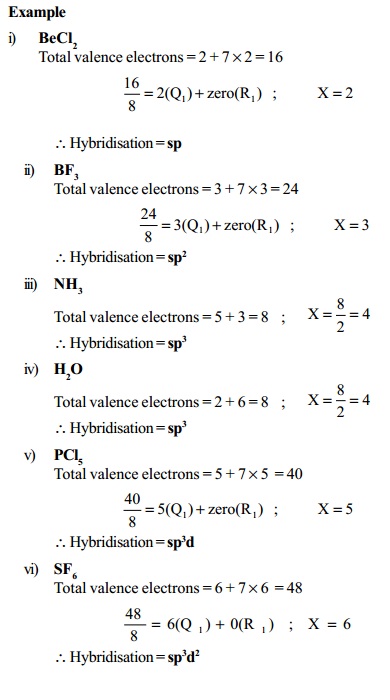 Hybridisation in some Typical Molecules and Ions