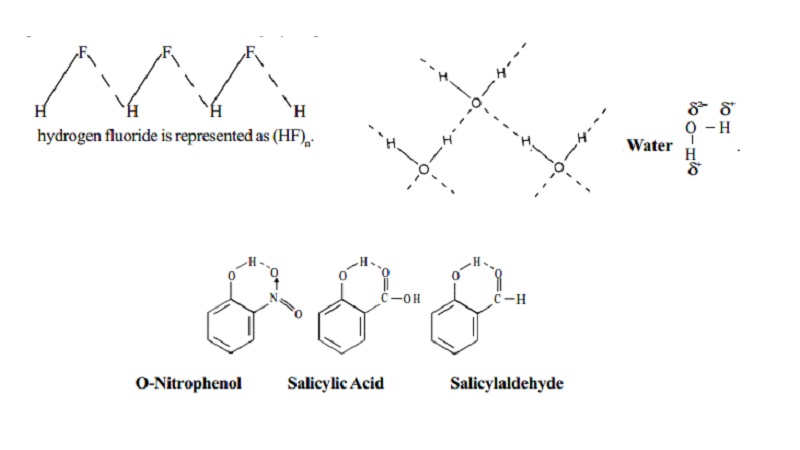 The ionic, covalent and coordinate bond arises due to attractive forces between atoms. Vander Waal (Dutch physicist, 1873) was the first to propose the existence of attractive forces between the atoms of inert gases with fully filled orbitals. These forces also exist between non-polar molecules as well as polar molecules. The attractive interactions between the molecules are responsible for bringing the molecules close together. The attractive interactions between the different molecule of a substance are called intermolecular forces. The magnitude of these forces is maximum in the solids and decreases on passing from solid to liquids and from liquid to gaseous state. Vander Waal successfully explained the liquefaction of gases on the basis of inter molecular forces. These forces are purely electrostatic and thus physical in nature.

Hydrogen bonding. Hydrogen bonding comes into existence as a result of dipole-dipole interactions between the molecule in which hydrogen atom is covalently bonded to a highly electronegative atom. Therefore, the conditions for the effective hydrogen bonding are :

i) high electronegativity of the atom bonded to hydrogen atom so that bond is sufficiently polar.

ii) small size of the atom bonded to hydrogen so that it is able to attract the bonding electron pair effectively.

If the atom bonded to hydrogen has low value of electronegativity and/or large atomic size, dipole-dipole interactions are not strong enough to allow effective hydrogen bonding.

Only nitrogen, oxygen and fluorine form strong hydrogen bonds because they have high value of electronegativity and small atomic size.

Strength of H-bonds. It is a weak bond because it is merely an electrostatic force and not a chemical bond. Its strength depends upon the electronegativity of atom to which H atom is ovalently bonded. Since electronegativity of F > O >N, the strength of H- bond is in the order H - F ......... H > H-O.....H > H- N.....H. Hydrogen bonds are much weaker than covalent bonds. The bond strength of different bonds is in the order : Ionic bond > Covalent bond >Hydrogen bond > dipole-dipole interactions, Vander Waal's (London forces).

There are two different types of hydrogen bonds as :

i)  Life would have been impossible without liquid water which is the result of  intermolecular H-bonding in it.

ii) Hydrogen bonding increase the rigidity and strength of wood fibres and thus makes it an article of great utility to meet requirements of housing, furniture, etc.

iii) The cotton, silk or synthetic fibres also own their rigidity and tensile strength to hydrogen bonding.