The boron occurs mostly as borates and its important ores are borax - Na2[B4O5(OH)4].8H2O and kernite - Na2[B4O5(OH)4].2H2O.. Aluminium is the most abundant metal and occurs as oxides and also found in aluminosilicate rocks. Commercially it is extracted from its chief ore, bauxite (Al2O3.2H2O). The other elements of this group occur only in trace amounts. The other elements Ga, In and Tl occur as their sulphides. 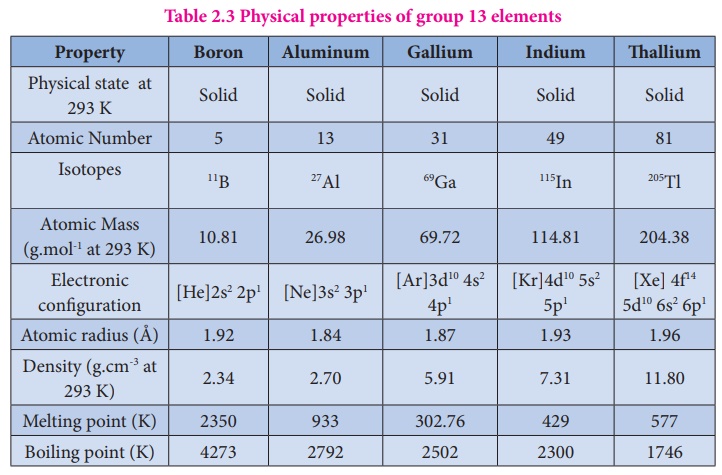 Boron is the only nonmetal in this group and is less reactive. However, it shows reactivity at higher temperatures. Many of its compounds are electron deficient and has unusual type of covalent bonding which is due to its small size, high ionisation energy and similarity in electronegativity with carbon and hydrogen.

Direct combination of metals with boron:

Reduction of borontrichloride with a metal assisted by dihydrogen gives metal borides.

Boron does not react directly with hydrogen. However, it forms a variety of hydrides called boranes. The simplest borane is diborane - B2H6. Other larger boranes can be prepared from diborane. Treatment of gaseous boron trifluoride with sodium hydride around 450 K gives diborane. To prevent subsequent pyrolysis, the product diborane is trapped immediately.

When boron is heated with oxygen around 900 K, it forms its oxide.

Reaction with acids and alkali:

Halo acids have no reaction with boron. However, boron reacts with oxidising acids such as sulphuric acid and nitric acids and forms boric acid.

·           Boron has the capacity to absorb neutrons. Hence, its isotope 10B5 is used as moderator in nuclear reactors.

·           Compounds of boron have many applications. For example eye drops, antiseptics, washing powders etc.. contains boric acid and borax. In the manufacture of Pyrex glass , boric oxide is used.