As discussed earlier diborane can be prepared by the action of metal hydride with boron.

This method is used for the industrial production.

Diborane can also be obtained in small quantities by the reaction of iodine with sodium borohydride in diglyme.

On heating magnesium boride with HCl a mixture of volatile boranes are obtained.

Boranes are colourless diamagnetic compounds with low thermal stability. Diborane is agas at room temperature with sweet smell and it is extremely toxic. It is also highly reactive. 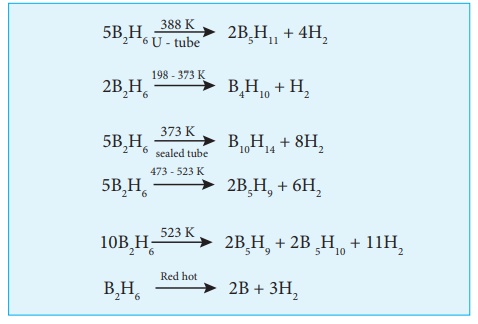 Diboranes reacts with water and alkali to give boric acid and metaborates respectively.

At room temperature pure diborane does not react with air or oxygen but in impure form it gives B2O3 along with large amount of heat.

Diborane reacts with methyl alcohol to give trimethyl Borate.

Diborane adds on to alkenes and alkynes in ether solvent at room temperature. This reaction is called hydroboration and is highly used in synthetic organic chemistry, especially for anti Markovnikov addition.

When treated with metal hydrides it forms metal borohydrides

The remaining four electrons have to be used for the bridged bonds. i.e. two three centred B-H-B bonds utilise two electrons each. Hence, these bonds are three centre- two electron bonds (3c-2e). The bridging hydrogen atoms are in a plane as shown in the figure 2.3. In diborne, the boron is sp3 hybridised. 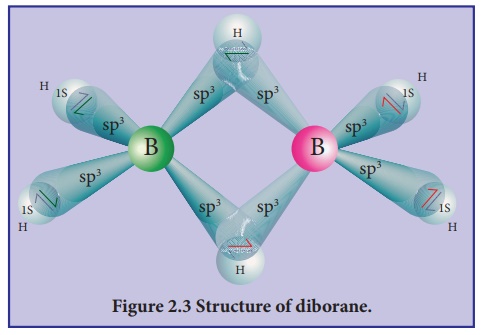