Carbon exists in many allotropic forms. Graphite and diamond are the most common allotropes.

Carbon exists in many allotropic forms. Graphite and diamond are the most common allotropes. Other important allotropes are graphene, fullerenes and carbon nanotubes.

Graphite is the most stable allotropic form of carbon at normal temperature and pressure. It is soft and conducts electricity. It is composed of flat two dimensional sheets of carbon atoms. Each sheet is a hexagonal net of sp2 hybridised carbon atoms with a C-C length of 1.41 Å which is close to the C-C bond distance in benzene (1.40 Å). Each carbon atom forms three σ bonds with three neighbouring carbon atoms using three of its valence electrons and the fourth electron present in the unhybridised p orbital forms a π-bond. These π electrons are delocalised over the entire sheet which is responsible for its electrical conductivity. The successive carbon sheets are held together by weak vander Waals forces. The distance between successive sheet is 3.40 Å. It is used as a lubricant either on its own or as a graphited oil.

Unlike graphite the other allotrope diamond is very hard. The carbon atoms in diamond are sp3 hybridised and bonded to four neighbouring carbon atoms by σ bonds with a C-C bond length of 1.54 Å. This results in a tetrahedral arrangement around each carbon atom that extends to the entire lattice as shown in figure 2.5. Since all four valance electrons of carbon are involved in bonding there is no free electrons for conductivity. Being the hardest element, it used for sharpening hard tools, cutting glasses, making bores and rock drilling. 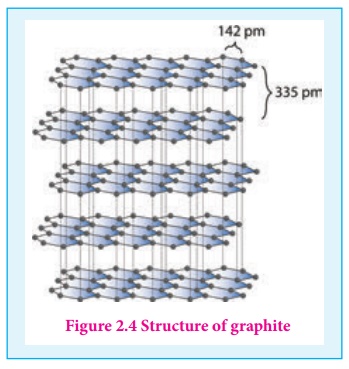 Fullerenes are newly synthesized allotropes of carbon. Unlike graphite and diamond, these allotropes are discrete molecules such as C32, C50, C60, C70, C76 etc.. These molecules have cage like structures as shown in the figure. The C60 molecules have a soccer ball like structure and is called buckminster fullerene or buckyballs. It has a fused ring structure consists of 20 six membered rings and 12 five membered rings. Each carbon atom is sp2 hybridised and forms three σ bonds & a delocalised π bond giving aromatic character to these molecules. The C-C bond distance is 1.44 Å and C=C distance 1.38 Å. 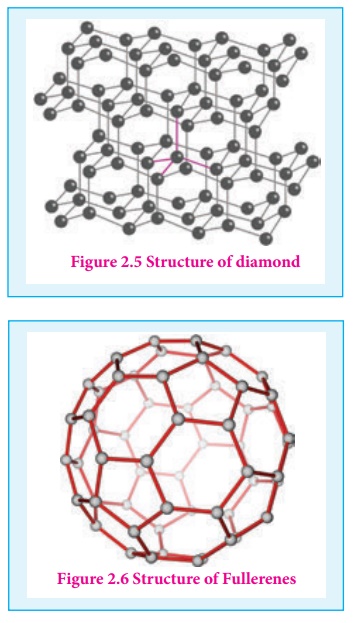 Carbon nanotubes, another recently discovered allotropes, have graphite like tubes with fullerene ends. Along the axis, these nanotubes are stronger than steel and conduct electricity. These have many applications in nanoscale electronics, catalysis, polymers and medicine. 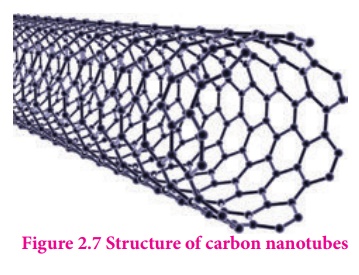 Another allotrophic form of carbon is graphene. It has a single planar sheet of sp2 hybridised carbon atoms that are densely packed in a honeycomb crystal lattice. 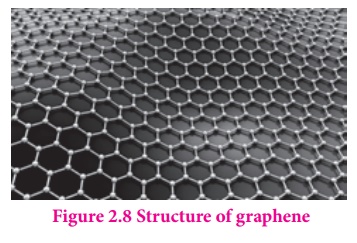