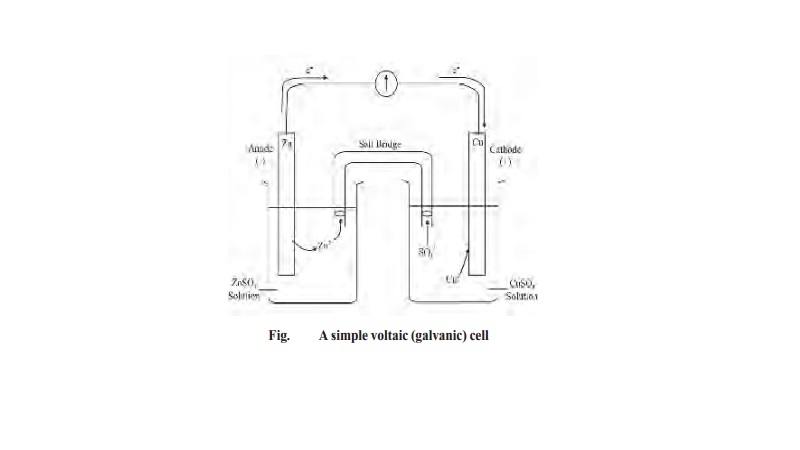 In electrochemistry, the interconversion of chemical energy and electrical energy is an important aspect that possesses numerous applications. For example, batteries supply electrical energy stored in the form of chemical energy for the operation of torch, radio, calculators etc. Conversely, electrical energy is used to bring about certain chemical reactions which are industrially important such as purification of metals like copper, aluminium, generation of gaseous chlorine, oxygen, hydrogen, electroplating, metal coatings etc. The electrochemical or electrolytic processes are carried out in a device known as a cell. An electrolytic (or) electrochemical cell consists of two conducting metal electrodes in contact with an electrolyte solution which separates them (or) placed separately in compartments containing suitable electrolytes. The electrolyte may be an aqueous solution containing mostly the salt of the metal with which the electrode is made of (or) it may be an ionically conducting solid.

There are two types of cells known as electrolytic cell and electrochemical cell. Each of them possesses different characteristics and used in different application.

Daniel cell : Daniel cell or a galvanic cell is an example of electrochemical cell. The overall reaction taking place in the cell is the redox reaction given as

The oxidation half reaction occurring at the zinc electrode in contact with the aqueous electrolyte containing Zn2+, accumulates the electrons at the zinc rod.

The reduction half reaction occurring at the copper electrode in contact with the aqueous electrolyte containing Cu2+ ions receives the electrons from the zinc electrode when connected externally, to produce metallic copper according to the reaction as,

The Daniel cell is also called as the voltaic cell. However for continuous supply of current for a long period, the two half cells each comprising the metal electrode and its aqueous electrolyte kept in separate containers and can be connected externally as below : 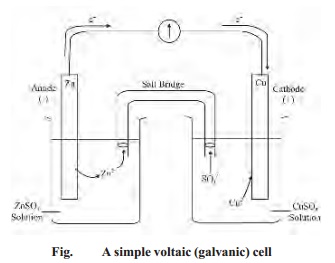 When the cell is set up, electrons flow from zinc electrode through the wire to the copper cathode. As a result, zinc dissolves in the anode solution to form Zn2+ ions. The Cu2+ ions in the cathode half cell pick up electrons and are converted to Cu atoms on the cathode.