There are two theories to explain the function of acid-base indicators.

This theory was proposed by Ostwald's in 1891. It is based on Arrhenius theory. According to this theory, the acid-base indicator is either a weak acid or a weak base. They are partially ionised in solution. The ionised and unionised forms have different colours. The indicator exists predominantly in one of the two forms depending on the nature of the medium and hence there is colour change when the nature of the medium changes. Phenolphthalein is a weak acid and it is partially ionised in solutions.

In acidic medium, excess H+ ions are present which suppress the dissociation of HpH due to common ion effect. Hence the indicator exists predominantly in unionised form and it is colourless. In alkaline medium, the OH- ion neutralises H+ ion to form water. Consequently the dissociation of HpH is favoured and the indicator is predominantly in the ionised form and it is pink in colour.

In the presence of a base excess OH- ions suppress the dissociation of MeOH due to common ion effect. Hence in basic medium, the indicator is mostly in unionised form which is yellow.

This theory also explains why phenolphthalein is not a suitable indicator in the titration of a strong acid against a weak base. The reason is the OH- ions produced by the weak base at the end point is too low to cause the ionisation of phenolphthalein. Hence, the pink colour does not appear exactly at the equivalence point. The pink colour appears only after a sufficient excess of the weak base is added.

For a similar reason, methyl orange is not a suitable indicator in the titration of a strong base against a weak acid. The weak acid does not furnish sufficient H+ ions to shift the equilibrium towards the right. A sufficient excess of the weak acid has to be added to get the colour change.

According to this theory the colour change of an acid-base indicator arises as a result of structural change. It is supposed that an indicator exists as an equilibrium mixture of two tautomeric forms namely, benzenoid and quinonoid forms.

One form exists in acidic solution and the other form in basic solution. At least one of the tautomers is a weak acid or a weak base. The two forms possess two different colours and as the pH of the solution containing the indicator is changed, the solution shows a change of colour. The colour change is due to the fact that one tautomer changes over to the other.

For example, phenolphthalein is tautomeric mixture of the two forms. 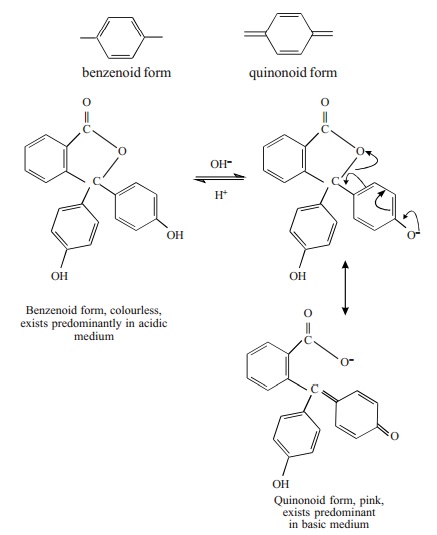