Drugs that act on sodium and potassium channels

After discussing the basic principles of ion channel func-tion in membrane excitation, it is important to note that for each major ion species there is a multitude of channels with specialized roles in different cell types and cell compart-ments.

Drugs that act on sodium and potassium channels

After discussing the basic principles of ion channel func-tion in membrane excitation, it is important to note that for each major ion species there is a multitude of channels with specialized roles in different cell types and cell compart-ments. This is particularly striking in the case of K+ and Ca++ channels. It was noted before that K+ channels may be either constitutively open or controlled by electrical fields or ligand binding. These major functional classes are struc-turally different from each other; this is apparent already by comparing the number of transmembrane helices con-tained in each of the channel proteins (Figure 5.1). While KV channels mediate the repolarization following an action potential, the basal K+ permeability at the resting potential – the one that actually keeps the resting potential close to the K+ equilibrium potential – is largely due to constitutive-ly open `leak' channels, which are part of a structurally dis-tinct family (Figure 5.1). `Inward rectifiers' are yet another family. We will see below that the sulfonylurea receptor, a membrane protein associated with the inward rectifier chan-nel (Kir), constitutes the main drug target related to the K+ channels. 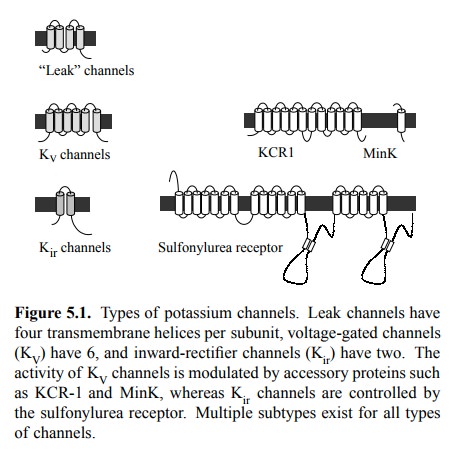 Figure 5.1. Types of potassium channels. Leak channels have four transmembrane helices per subunit, voltage-gated channels (KV) have 6, and inward-rectifier channels (K ir) have two. The activity of KV channels is modulated by accessory proteins such as KCR-1 and MinK, whereas Kir channels are controlled by the sulfonylurea receptor. Multiple subtypes exist for all types of channels.

In addition, even within each individual family, there is a considerable number of variant genes. As an example, Fig-ure 5.2 shows the homology tree for the KV genes in the hu-man genome. Additional variation arises from the fact that the functional channel is a tetramer that can be composed of one or several types of subunits (Figure 5.2, right). In fact, several KV genes have been shown not to yield func-tional channels when expressed alone, indicating that the proteins they encode may only function in heteromeric combinations with other KV gene products. Most of the possible combinations are as yet uncharacterized with re-spect to occurrence and function.

Sodium channels occur in multiple subtypes, too, although they are not quite as varied as potassium channels are. The voltage-gated sodium channels do exhibit homology to KV channels, but in contrast to the latter they are monomeric, i.e. the four functional subunits that are separate in the K+ channels are merged into one polypeptide chain in the Na+ channels. Calcium channels, in contrast, are a fairly var-ied group again, and include both voltage-gated and ligand-gated channels1. The ligands are of very heterogeneous de-scription and include nucleotides, proteins such as calmod-ulin and G proteins, and ions. With the ryanodine recep-tor channel, Ca++ occurs both as a conducted ion and as a channel regulator, causing a very peculiar behaviour of this channel. 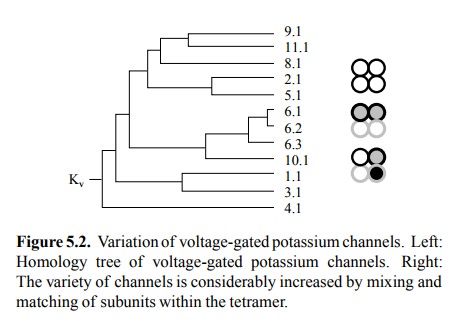 Why harp on this multitude of channel subtypes? One im-portant consequence is that it is very difficult at present to be sure about the spectrum of channels that may actually be targeted by a given drug in vivo. Observation of even strong interaction with one channel type in an in vitro mod el does not imply that this will be the only drug target in vivo, or even the most important one. Accordingly, with many drugs that act on ion channels, there is still a good deal of uncertainty with respect to their precise physiologi-cal mechanism of action.

Drugs that act on cation channels are used in various clini-cal applications. With sodium channels, these are:

Potassium channels are drug targets in the following con-texts:

Drugs acting on calcium channels have a similar range of applications:

We will now look at drugs that manipulate Na+ and K+ channels. Drugs that target calcium channels will be cov-ered after a bit more of theory in a later section.