Home | | Biochemical Pharmacology | Pharmacologically important neurotransmitters and their receptors
Posted On :  09.09.2017 11:20 am

Pharmacologically important neurotransmitters and their receptors

Some examples of important neurotransmitters are shown in Figure 7.5.

Pharmacologically important neurotransmitters and their receptors

Some examples of important neurotransmitters are shown in Figure 7.5. The first one to be recognized – and still one of those most important for pharmacotherapy – is acetylcholine. Its enzymatic cleavage by cholinesterase enables its extremely fast inactivation, which is necessary in a synapse with very high repetition rates such as the neuro-muscular junction in skeletal muscle. However, it is also used in slower synapses in the peripheral autonomic nervous system, as well as in the central nervous system; 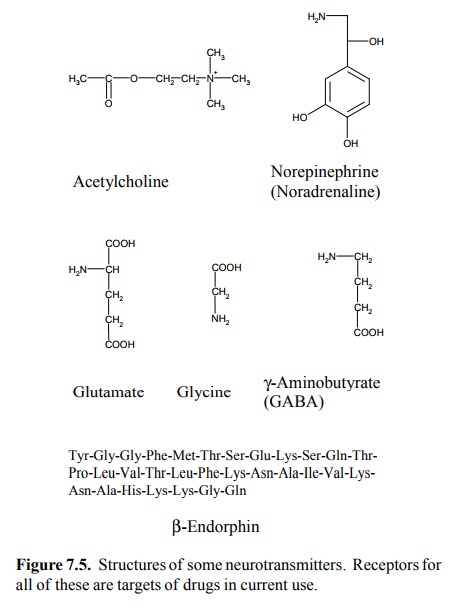 we will see later that these different types of cholinergic synapses may be targeted by specific drugs.

Norepinephrine occurs in the peripheral and central au-tonomic system. The most important problem that is ad-dressed by drugs acting on adrenergic synapses is high blood pressure. Many of these drugs act as postsynap-tic antagonists or as presynaptic agonists, respectively. Dopamine differs from norepinephrine only by lacking its single aliphatic hydroxyl group. Parkinson's disease is due to a dopamine deficit owing to the degeneration of a fairly tiny group of nerve cells in the brainstem (called the `sub-stantia nigra', black substance). Application of L-DOPA, the precursor of dopamine, is the mainstay of therapy.

While both dopamine and norepinephrine are derived from tyrosine, serotonin (5-hydroxytryptamine, 5-HT) is derived from tryptophan. All three transmitters are very important in psychiatric disorders, and accordingly many psychophar-maca act on their receptors.

Glutamate is the most widespread transmitter in the cen-tral nervous system. Despite its widespread occurrence, there are few clinically useful drugs that target glutamater-gic synapses. In some places in the brain, there is an antag-onism between dopaminergic and glutamatergic neurons. Accordingly, inhibitors of glutamate receptors are used in addition to L-DOPA in the treatment of Parkinson's dis-ease. An example is amantadine, which acts on the NMDA type glutamate receptor (see next section).

GABA (γ-aminobutyric acid) is derived from glutamate by decarboxylation. It occurs predominantly in inhibitory synapses in the central nervous system, as does glycine. Tetanus toxin acts on glycinergic neurons in the spinal cord, which exert inhibitory regulation on the α-motoneurons.

β-Endorphin is but one of an ever-increasing number of peptide neurotransmitters, and one of the rare cases in which there actually are specific agonists and antagonists – the name endorphin stands for `endogenous morphine'.

Morphine and other opioids act on receptors for β-endor-phin and the related enkephalins. β-Endorphin was found earlier than the other peptide transmitters because opi-oids were made available by nature; they could be used as probes to find the receptors, which could then in turn be used to screen brain extracts for substances that would dis-place opioids from their receptors.