In other (mainly elderly) patients, the main problem may consist not so much in under-perfusion of the heart muscle but in a weak contractility.

In other (mainly elderly) patients, the main problem may consist not so much in under-perfusion of the heart muscle but in a weak contractility. The heart becomes distended, further reducing the effectiveness of contraction5. Here, we clearly want to increase the contractility of the heart mus-cle. The most effective way to do this is to raise the avail-ability of calcium in the cytosol. This is done with digitalis (foxglove) glycosides. The mechanism of action of these is outlined in Figure 6.8a. Digitalis glycosides bind to and block the Na+/K+-ATP'ase in the cytoplasmic membrane. The backup of sodium in the cell reduces the active export of Ca++ from the cytoplasm. Although the transfer of cal-cium across the cytoplasmic membrane is small relative to the fluxes occurring across the ER membrane, the ER stores will eventually fill up, and the cytosolic Ca ++ level will be raised. This treatment is quite effective and was readily recognized as such in an earlier era that did not make use of advanced statistical methods to measure therapeutic re-sponses. Nevertheless, the usage of digitalis is not undis-puted, particularly in North America. Why? It is a matter of perspective. Patients usually benefit as long as they live – but they do not live longer. Digitalis glycosides have, as you will now have come to expect, effects on the pacemak er cells as well, and so they do promote certain types of ar-rhythmias themselves. 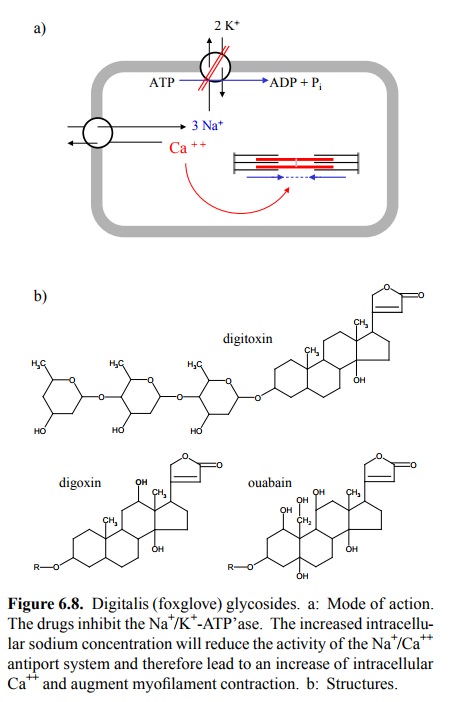 If we consider the mode of action of digitalis, what would we expect the therapeutic index of the drug to be: Large or rather smaller? Complete receptor saturation will com-pletely knock out the Na+/K+-ATP'ase and thereby termi-nate the life of the target cell. Thus, it is quite obvious that we will have to walk a fine line in determining the right dosage. Therefore, we will have to consider very carefully the pharmacokinetic properties of the drugs, and the kidney and/or liver functions of the patient.

Figure 6.8b compares the three major digitalis glycosides that are (or have been) used clinically. The structure of digitoxin is depicted completely, with both the steroid-like `aglycone' moiety and the three residues of digitose, which is a hexose that lacks two hydroxyl groups. These are rep-resented by `R' in the two other structures and actually not required for activity – they can be replaced by, e.g., a single acetyl residue. However, the lactone group – the five-mem-bered ring at the top – is essential. Its hydrolysis (cleavage of the bold single bond) or its reduction (of the bold dou-ble bond to a single bond) will abolish activity. And here is a snag: Digitoxin, being highly protein-bound, is not ef-ficiently eliminated in the kidneys but instead conjugat-ed in the liver and largely secreted into the bile and intes-tine. There, a large fraction undergoes cleavage of the (glu-curonide) conjugate and then reuptake, i.e. enterohepatic cycling, so that this drug has a very long overall half-life. However, during the intestinal passage, the lactone ring may be reduced by bacterial enzymes, and the drug molecule thus be inactivated. Due to the individual variations in the intestinal flora, this reduction may occur to varying extents, which introduces an element of variability into the effec-tiveness of this drug. Worse still, the analytical separation of the reduced and the unreduced drug is not trivial and is not achieved by the routine drug monitoring assays present-ly available.

Digoxin has one additional hydroxyl group, which (some-what miraculously, it would seem) changes its pharmacoki-netic parameters such that it is largely eliminated in the kid-neys. This avoids the intricacies of entero-hepatic cycling; however, it renders the rate of elimination dependent on kidney function, which tends to be more variable than liver function. Also, intestinal uptake directly after oral inges-tion tends to be lower and more variable. An even more polar derivative is ouabain. This drug is rapidly eliminated in the kidneys. However, it is not efficiently taken up after oral application and so can only be used intravenously. 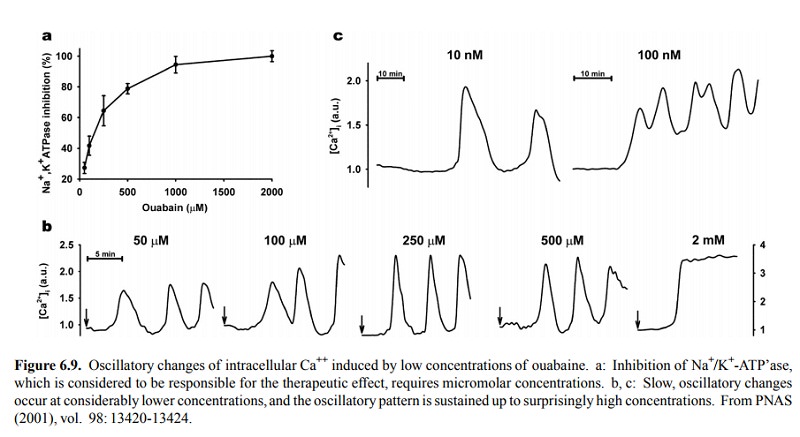 Recently, it has been found that ouabain (once thought to occur in plants only) is, in fact, secreted by the adrenal glands – at concentrations far lower than those necessary for inhibition of the Na+/K+-ATPase. Nevertheless, there is experimental evidence that even at the low physiological concentrations, ouabain may modulate cellular function. This is illustrated in Figure 6.9. While half-maximal inhibi-tion of Na+/K+-ATP'ase occurs at about 100-200 µM (Fig-ure 6.9a), elevations in the cellular calcium level (measured using a cell-permeant, calcium-binding fluorescent dye) are detected with nanomolar range concentraions of ouabaine. Remarkably, these occur as slow waves rather than contin-uously. In the study cited, a secondary effect on a certain transcription factor was noted as well. While the physiolog-ical role of endogenous ouabain remains unsettled, the oc-currence of both temporal and spatial waves and spikes of calcium signals is increasingly recognized, and adds yet an-other layer of complexity to its role in cellular signalling.