Calcium has a pivotal role in the control of muscle cell action. Muscle cells occur in different types:

Calcium has a pivotal role in the control of muscle cell action. Muscle cells occur in different types:

Heart and skeletal muscle together are classified as striated muscle yet do have some important functional differences (see below). The muscle cells in vessel walls control the blood pressure, which makes them important drug targets; that heart muscle cells are important targets, too should go without saying.

We will first look at the role of calcium in the contraction of striated muscle. Figure 6.2a shows a light-microscopic picture of heart muscle. The striations are oriented perpen-dicularly to the longitudinal axis of the cells. The borders between the individual heart muscle cells are bridged by gap junctions, which will ensure swift spread of excitation from one cell to the next. Skeletal muscle cells form long syncytia in which the excitation spreads even faster. 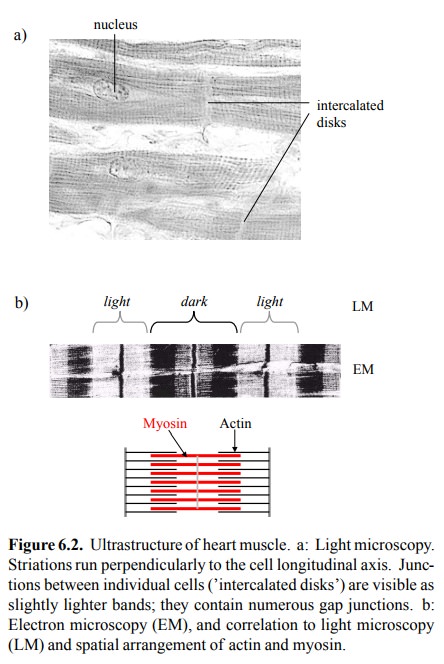 At electron microscopic resolution, the striations appear more complex (Figure 6.2b). They correspond to densely and regularly packed filaments of actin and myosin, each composed of numerous, linearly polymerized subunits2. The finer striations visible in EM are due in part to addi-tional structural proteins, and in part to zones of overlap be-tween actin and myosin.

While actin and myosin are present and responsible for motility in essentially all cells, a peculiarity of the striated muscle (apart from the sheer amount and regular, parallel packing) is the presence of two additional proteins associ-ated with the actin filaments. These proteins are troponin and tropomyosin, and they are crucial in the control of con-traction.

The arrangement and the workings of actin, myosin, tro-ponin and tropomyosin in striated muscle are summarized in Figure 6.3. The myosin heads are in close proximity to the actin filaments, but in the resting state direct contact be-tween actin and myosin is blocked by the tropomyosin fil-aments. Upon cell excitation, calcium becomes available and binds to troponin, which in turn moves the tropomyosin out of the way. The heads of myosin are allowed to access their binding sites on actin. Binding causes the myosin head to bend. This will both propel the myosin filament along the actin `track'and trigger the intrinsic ATPase activ-ity of myosin. The energy of ATP cleavage is used to pow-er cycles of binding, bending and release. This activity is commonly likened to rowing; the myosin heads, then, com-prise both the oar and the biceps, whereas the actin filament is merely the water. Interestingly, the ATP is actually ex pended at the stage of the `push' rather than `pull' – which is where the analogy ends. 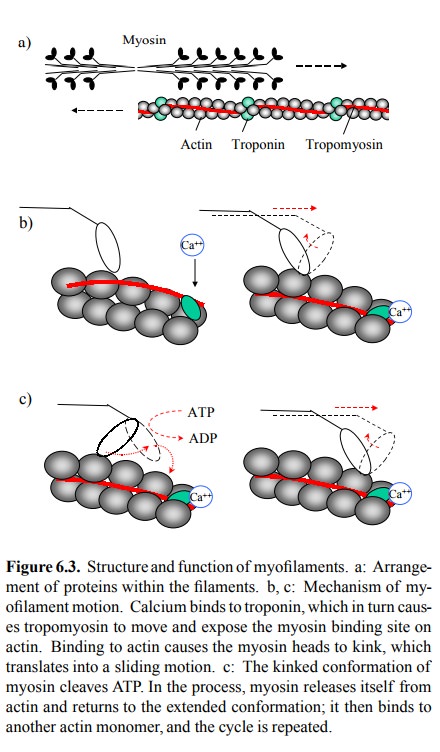 In striated muscle, the sheer amount of filaments is such that we actually need quite a bit of calcium to swiftly sat-urate the troponin molecules and trigger contraction. The lion's share of this calcium is not obtained from the extra-cellular space (via the voltage-gated Ca++ channel, the dihy-dropyridine receptor – see later) but from the intracellular storage, more specifically from the endoplasmic reticulum, which somebody found necessary to christen `sarcoplas-mic' reticulum in the muscle cell (gr. sarx, sarkos = flesh). It is released from there by a specialized Ca++ channel, the ryanodine receptor (RyR)3. This channel is activated by cy tosolic calcium, which of course creates a fast and powerful amplification mechanism for the release of calcium from the ER and, thus, for contraction (Figure 6.4). 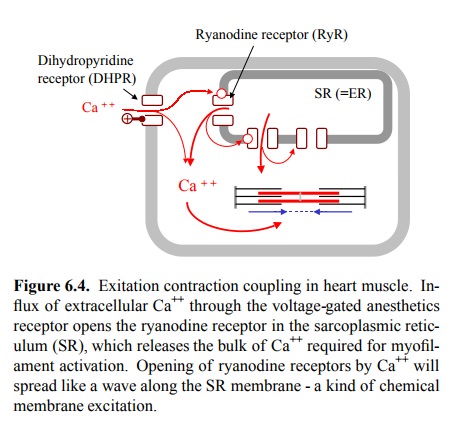 The anatomical arrangement of the cell membrane, the SR, and the myofilaments in the striated muscle is further opti-mized for rapid action. Figure 6.5 illustrates this for a skele-tal muscle cell. The cytoplasmic membrane there forms in-vaginations called T (transversal) tubules, which protrude into the cell interior and enter into immediate contact with the SR cisterns, which in turn are aligned to the contractile filaments. 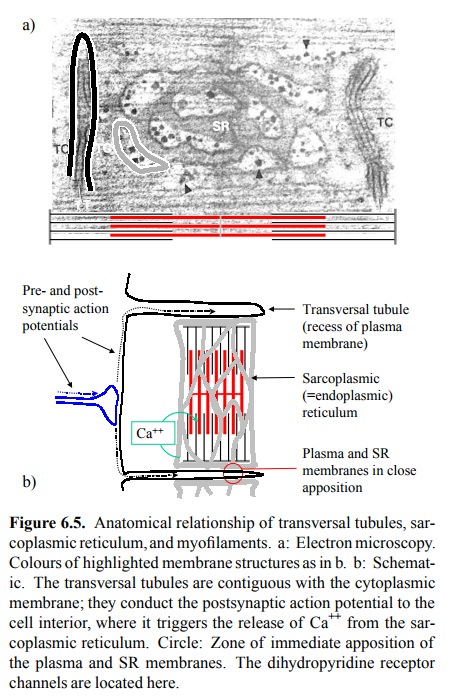 The close alignment of cytoplasmic and ER membranes is, in fact, crucially important for the workings of excitation-contraction coupling in the skeletal muscle. In these cells, we have a unique mechanism of activation of one channel by another: The RyR is directly hooked up to a cytosolic loop of the dihydropyridine receptor (DHPR; Figure 6.6a, b). Membrane depolarization will cause a conformational change to the DHPR, which in turn is directly and mechan-ically transmitted to the RyR, so that both channels open synchronously. This even works in the absence of any cal-cium flux across the cytoplasmic membrane – experimen-tally, skeletal muscle cells can be induced to contract in calcium-free buffers. 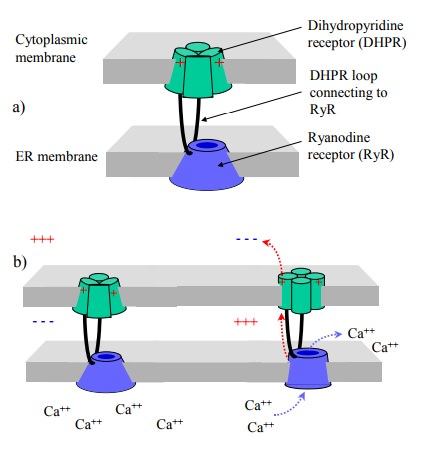 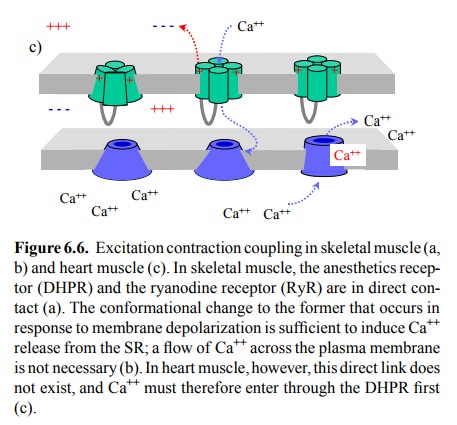 Although the anatomical relationships are closely similar in the heart muscle, there is no direct coupling between the DHPR and the RyR in this case (Figure 6.6c). There-fore, excitation-contraction coupling in the heart muscle cells does require flux of calcium across the DHPR channel, even if only as a trigger, which will then activate the RyR and release the lion's share of the calcium needed for acti-vating troponin from the SR. Thus, drugs that reduce flow of Ca++ through the DHPR channel will reduce the force of contraction in the heart (and in smooth muscle, see later) but not the skeletal muscle.