Some aspects of neurophysiology relevant to pharmacology

The nervous system can be divided according to different categories:

Some aspects of neurophysiology relevant to pharmacology

This chapter presents some basic facts from neurophysiol-ogy that will be needed in subsequent chapters on the phar-macology of the nervous system.

The nervous system can be divided according to different categories:

1.  Central versus peripheral. The central nervous system comprises the brain and the spinal cord, which together are protected from the periphery by the blood brain bar-rier.

The two above distinctions are `orthogonal', which means that we find autonomic and somatic parts in both the cen-tral and the peripheral nervous system. Among the four re-sulting categories, the peripheral autonomic system has a prominent role as a drug target, for the following reasons:

•     It is responsible for the functional regulation of interior organs and physiological parameters (such as heart rate and blood pressure) that are relevant to disease.

•     It is readily accessible, i.e. not protected by the blood brain barrier.

•     As with all of the peripheral nervous system, its orga-nization is comparatively simple, at least more so than that of the brain is, and selective drug action is more fea-sible.

The relative simplicity of the peripheral nervous system also explains why drug actions occurring there usually are understood in a more definite way. With centrally act-ing drugs, there often is a vagueness of understanding that makes them less compelling as examples for an introducto-ry class – although in clinical practice they are very impor-tant, of course.

Selective drug action on the nervous system is feasible to the extent that different subsystems use specific transmitters and receptors. Before we take a look at these, we will first review some general aspects of nerve cell structure and function.

Figure 7.1a shows the schematic of a nerve cell (neuron). The soma (greek: body) contains the nucleus and the bulk of the biosynthetic apparatus (ER etc.) It branches out into multiple dendrites (greek dendron = tree) and a single, usu-ally longer axon that may branch in turn to reach multiple target cells. Afferent synapses are mostly located at the dendrites and the soma; they receive signals from other neu-rons. The input from all dendritic synapses is summed up and controls the efferent activity of the neuron. The latter consists in the generation of action potentials. The effer-ent action potentials travel swiftly down the axon to the ef ferent synapses, where they will trigger the release of neu-rotransmitters from the terminal buttons. In this way, they will influence the activity of the next nerve or other ex-citable cell. All action potentials will be of similar ampli-tude and duration; it is the repetition rate that represents the level of activity (Figure 7.1b). 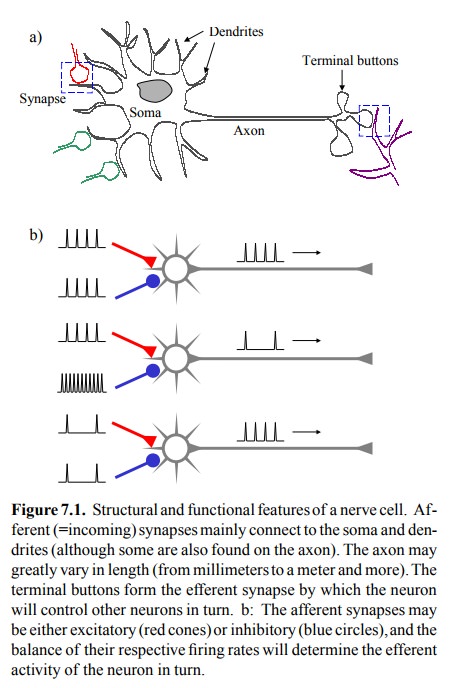 In all synapses, the presynaptic cell will always be a neu-ron2. Postsynaptic cells can be either neurons, striated or smooth muscle cells, or gland cells (Figure 7.2a). In the case of skeletal muscle, the presynaptic neuron will be part of the somatic nervous system. In contrast, neurons that project to the heart muscle will be part of the autonomic system – none of us can voluntarily change the heartbeat. While in many synapses the presynaptic and postsynaptic membranes are in close apposition, thus ensuring rapid ac-tion, this is not necessarily the case in the effector synapses of the autonomic nervous system, which frequently do not have extremely time-critical missions. 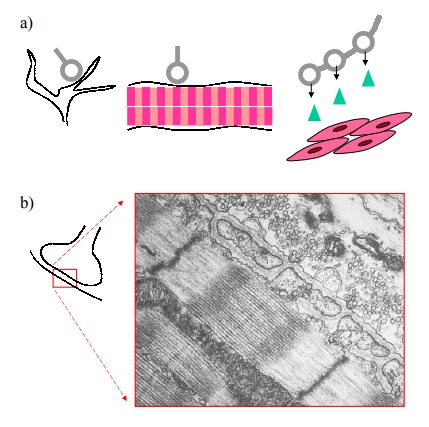 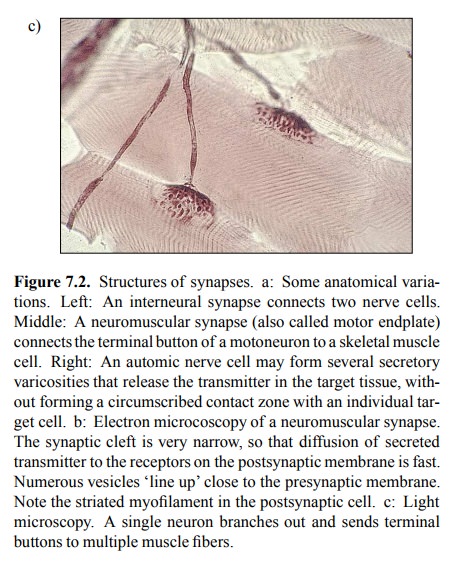 Figure 7.2b shows an electron microscopic picture of a neu-romuscular synapse. You can see the very narrow synaptic cleft, the numerous synaptic vesicles, and the actin / myosin filaments in the postsynaptic muscle cell. No space is wast-ed in this very fast and efficient synapse. Figure 7.2c shows a lower power (light microscopic) preparation of a nerve ending that branches toward multiple muscle cells. The synaptic buttons are clearly visible. Note that a single nerve cell controls several muscle fibers (up to several hundred, in fact). Synaptic excitation will trigger an all-out action po-tential at the muscle cell membrane that will be propagated swiftly along the entire expanse of the muscle fiber.