Mechanisms of drug action on synapses

Mechanisms of drug action on synapses

1.  Direct agonists and antagonists will directly bind to the postsynaptic receptor and either activate or competitive-ly block it. 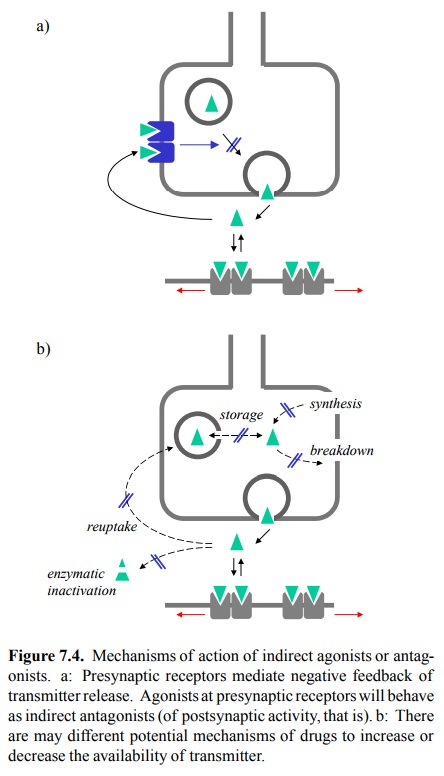 3.  Drugs may augment the effect of the endogenous neuro-transmitter by inhibiting its usually very rapid elimina-tion from the synaptic cleft by either enzymatic degra-dation or presynaptic reuptake (Figure 7.4b). Enzymatic degradation occurs with acetylcholine, whereas presy-naptic reuptake is used to scavenge most other small transmitter molecules.

4.  Within the presynaptic neuron, synthesis, breakdown, or vesicular accumulation of the transmitters may be al-tered. This may lead to short-term release and long-term depletion of neurotransmitter. These mechanisms are relevant to cocaine and mechanistically similar drugs of abuse. Drugs that act according to any of these mecha-nisms are usually referred to as indirect agonists or an-tagonists, respectively.

We will see examples of all of these mechanisms in subse-quent chapters.