Among the potassium channels, it is not the voltage-gated ones but a ligand-gated channel that constitutes the main drug target.

Among the potassium channels, it is not the voltage-gated ones but a ligand-gated channel that constitutes the main drug target. This is the ATP-sensitive `inward rectifier' (Kir) channel8. The ATP sensitivity is conferred by a second membrane protein with which it is associated, the so-called sulfonylurea receptor (Figure 5.11a). The sulfonylurea re-ceptor is homologous to the family of `ABC' (ATP-binding cassette) transporters that occurs in both prokaryotes and eukaryotes. These proteins mediate the ATP-driven mem-brane transport of a wide variety of substances, including the extrusion of toxic compounds9. The sulfonylurea recep-tor, however, serves a different purpose: The conforma-tional change induced by binding of ATP is relayed to the K+ channel, which thus becomes responsive to ATP: High levels of ATP inhibit the channel, while lower levels cause it to open. This is schematically depicted in Figure 5.11b. 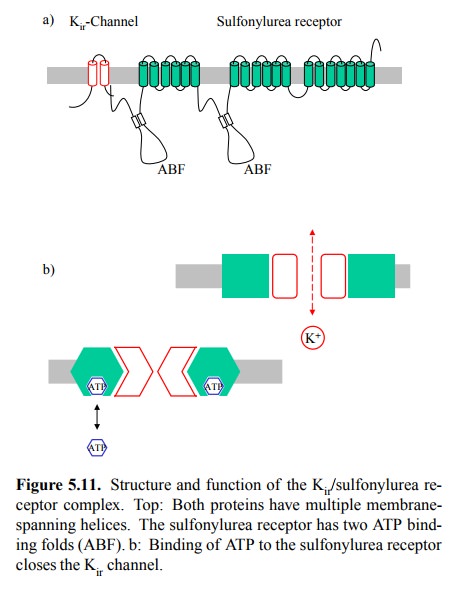 The sulfonylurea receptor does not only occur in nerve and muscle cells but also in pancreatic β-cells. These are located in the islets of Langerhans, and they function as both sensors of glucose and as purveyors of insulin. Insulin secretion is triggered by membrane depolarization, so that these cells are in fact excitable cells. The control of insulin secretion, and the role of the Kir channel in it are depicted in Figure 5.12. 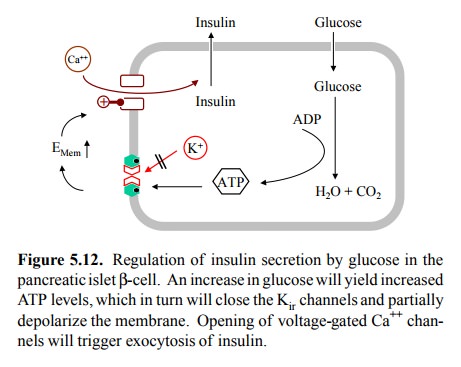 The `message' conferred by insulin is that glucose is plen-tifully available, and that accordingly all cells should in-crease their uptake, glycogen stores should be replenished, and internal glucose production (gluconeogenesis) should shut down. Accordingly, a high level of blood glucose should stimulate insulin secretion. This is accomplished as follows: High blood glucose will raise the level of glu-cose in the β-cell. Glucose breakdown will raise the level of ATP, and the subsequent closure of the Kir channel will induce membrane depolarization. This, in turn, will open voltage-gated Ca++ channels, and the increase in intracellu-lar Ca++ will trigger exocytosis of insulin stored in secretory vacuoles. The same mechanism of coupling between membrane depolarization and exocytosis applies to the release of neurotransmitter in a synapse in response to a presynaptic action potential (see later). 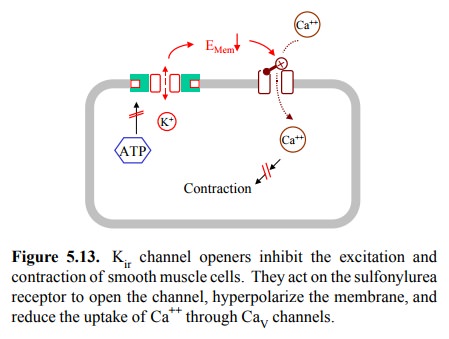 Sulfonylurea derivatives such as tolbutamide (Figure 5.14) bind to the sulfonylurea receptor and thereby promote the closing of the Kir channel. This amplifies the secretion of insulin – a desirable effect in type II diabetics, who suffer not from an absolute lack of insulin (as type I diabetics do) but from an inadequate response to it. Sulfonylurea drugs can be used orally, which is more convenient than insulin therapy. It is also less prone to result in excessive insulin action (hypoglycemia), since the physiological signal is amplified but not substituted. However, commonly the β-cells `wear out' eventually, and insulin therapy has to be instituted anyway. 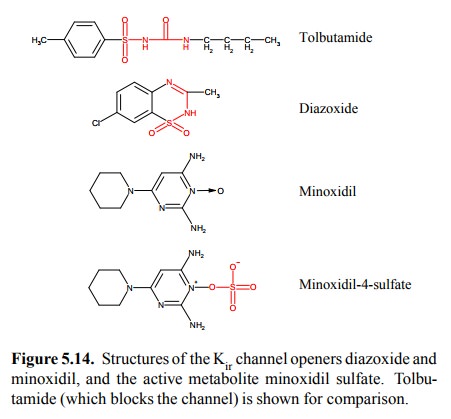 Another, as yet experimental use of sulfonylurea deriva-tives targets the Kir channels in the heart in certain forms of arrhythmias. The sulfonylurea receptors in the heart are somewhat different from those in the β-cells, which makes selective drug action possible. Closing potassium chan-nels should increase the excitability of heart muscle cells  – in contrast to the effect of sodium (and calcium) channel blockers! Don't worry, though – the cardiologists will find a way to show us why this is a good thing, like old farm ers have a saying to predict each kind of weather in ret-rospect.