A second major clinical application for lidocaine and related sodium channel blockers consists in the suppression of arrhythmias in the heart, which most commonly arise there as a consequence of some hypoxic tissue damage.

A second major clinical application for lidocaine and related sodium channel blockers consists in the suppression of arrhythmias in the heart, which most commonly arise there as a consequence of some hypoxic tissue damage. To un-derstand this usage, we will briefly look at some details of heart physiology.

As noted before, the heart has its own conduction system for creating rhythmic excitations and propagating them in an orderly fashion to the muscle cells. The primary pace-maker is the sinoatrial node, which sits somewhere in the wall of the right atrium (Figure 5.8a). We have already seen before that it utilizes calcium and potassium but not sodium channels to create a spontaneous rhythm (Figure 5.8b, top). Specialized muscle fibers conduct each action potential first to the atrio-ventricular node and from there to the bundle of His, the Purkinje's fibers and finally the muscle cells. The lower parts of the conduction system are capable of gen-erating spontaneous rhythms, too, but slower ones; thus, in a healthy heart, their own rhythm gets overridden by the sinoatrial node. However, if the sinoatrial node fails, the rhythms of the downstream parts (typically the AV node; Figure 5.8b, center) will become manifest. 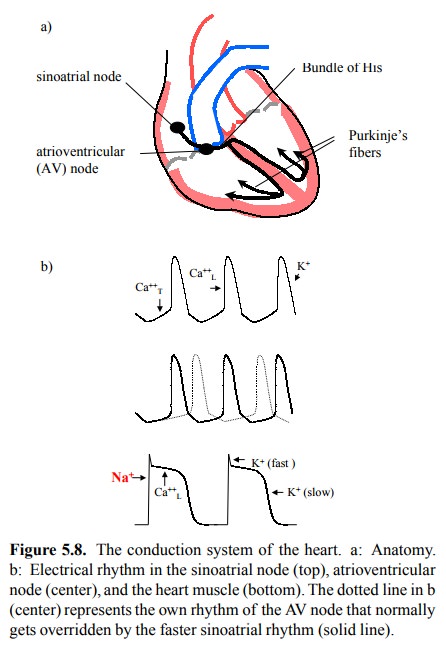 The `worker' heart muscle cells (as opposed to the cells in the conduction system, which are also specialized muscle cells) are peculiar in using both Na+ and Ca++ in the depo-larization phase of the action potential (Figure 5.8b, bot-tom). While they do not normally create action potentials themselves, under pathological conditions some of them may show spontaneous discharge. This depolarization may then spread across the entire heart (or parts of it) and in-terfere with normal and regular activity. While both calci-um and sodium channel blockers have their applications in treating heart arrhythmias, the beauty of the sodium chan-nel blockers is that they will not interfere with the activity of the regular pacemakers (since those essentially don't use sodium channels). Another beneficial feature was pointed out above: Lidocaine extends the duration of the inacti vated state of the sodium channel more strongly at higher membrane potentials (Figure 5.7). Since the resting poten-tial will typically be higher in diseased cells than in healthy ones6, this feature may confer some selectivity of the drug for the diseased, electrically unstable cells and help limit toxicity. 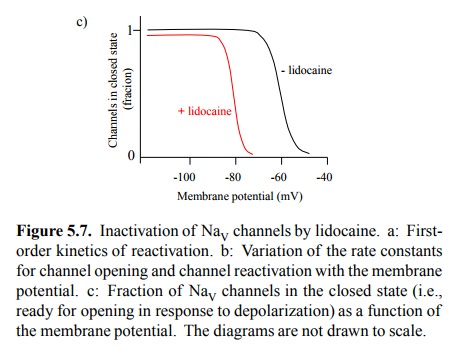 Since local anesthetics are applied locally and mostly need-ed for short times of action, their rate of systemic elimi-nation doesn't matter too much. However, treatment of arrhythmias is usually prolonged and should be possible by oral therapy. Lidocaine gets metabolized very rapid-ly, and the bioavailability after oral ingestion is only ~3%. Metabolism consists in dealkylation of the tertiary amino group, and in cleavage of the amide bond (Figure 5.9); it can therefore be used only intravenously. Two derivatives that partially (tocainide) or entirely (mexiletine) avoid these metabolic modifications are shown as well. These drugs, expectedly, have higher bioavailability and can accordingly be used orally. 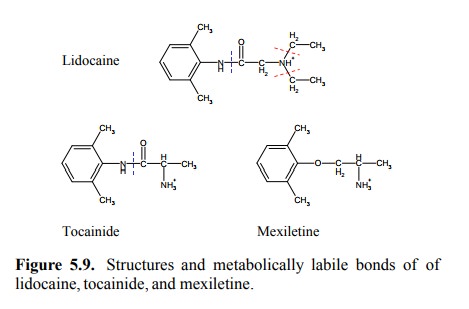 Besides local anesthetics and their derivatives, there are other antiarrhythmic drugs that share their mechanism of action and block sodium channels. Quinidine is the enan-tiomer of quinine and, within a mixture with the latter, was initially used to treat malaria, before its anti-arrhythmic ef-fects were noticed and utilized. Amiodarone is the most ef-fective (and most toxic) anti-arrhythmic drug available. It seems to have a multitude of effects on a multitude of chan-nels, and it is not known at present which single effect is the most significant one. Amiodarone is a good example of drug use on a largely empirical basis continuing in our era of purportedly entirely `rational' medicine, without a clear understanding of the molecular mode of action.