The ovary has important gametogenic functions that are inte-grated with its hormonal activity. In the human female, the gonad is relatively quiescent during childhood, the period of rapid growth and maturation. At puberty, the ovary begins a 30- to 40-year period of cyclic function called the menstrual cycle because of the regular episodes of bleeding that are its most obvi-ous manifestation. It then fails to respond to gonadotropins secreted by the anterior pituitary gland, and the cessation of cyclic bleeding that occurs is called menopause.

The mechanism responsible for the onset of ovarian function at the time of puberty is thought to be neural in origin, because the immature gonad can be stimulated by gonadotropins already present in the pituitary and because the pituitary is responsive toexogenous hypothalamic gonadotropin-releasing hormone. The maturation of centers in the brain may withdraw a childhood-related inhibitory effect upon hypothalamic arcuate nucleus neurons, allowing them to produce gonadotropin-releasing hormone(GnRH) in pulses with the appropriate amplitude, which stimu-lates the release of follicle-stimulating hormone (FSH) and luteinizing hormone (LH) . At first, smallamounts of the latter two hormones are released during the night, and the limited quantities of ovarian estrogen secreted in response start to cause breast development. Subsequently, FSH and LH are secreted throughout the day and night, causing secretion of higher amounts of estrogen and leading to further breast enlargement, alterations in fat distribution, and a growth spurt that culminates in epiphysial closure in the long bones. The change of ovarian function at puberty is called gonadarche.

A year or so after gonadarche, sufficient estrogen is produced to induce endometrial changes and periodic bleeding. After the first few irregular cycles, which may be anovulatory, normal cyclic function is established.

At the beginning of each cycle, a variable number of follicles (vesicular follicles), each containing an ovum, begin to enlarge in response to FSH. After 5 or 6 days, one follicle, called the dominant

follicle, begins to develop more rapidly. The outer theca and inner granulosa cells of this follicle multiply and, under the influence of LH, synthesize and release estrogens at an increasing rate. The estrogens appear to inhibit FSH release and may lead to regression of the smaller, less mature follicles. The mature dominant ovarian follicle consists of an ovum surrounded by a fluid-filled antrum lined by granulosa and theca cells. The estrogen secretion reaches a peak just before midcycle, and the granulosa cells begin to secrete progesterone. These changes stimulate the brief surge in LH and FSH release that precedes and causes ovulation. When the follicle ruptures, the ovum is released into the abdominal cavity near the opening of the uterine tube.

Following the above events, the cavity of the ruptured follicle fills with blood (corpus hemorrhagicum), and the luteinized theca and granulosa cells proliferate and replace the blood to form the corpus luteum. The cells of this structure produce estrogens and progester-one for the remainder of the cycle, or longer if pregnancy occurs.

If pregnancy does not occur, the corpus luteum begins to degenerate and ceases hormone production, eventually becoming a corpus albicans. The endometrium, which proliferated dur-ing the follicular phase and developed its glandular function during the luteal phase, is shed in the process of menstruation. These events are summarized in Figure 40–1. 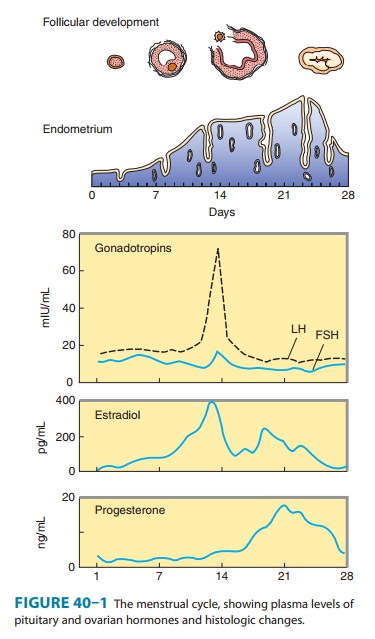 The ovary normally ceases its gametogenic and endocrine func-tion with time. This change is accompanied by a cessation in uter-ine bleeding (menopause) and occurs at a mean age of 52 years in the USA. Although the ovary ceases to secrete estrogen, significant levels of estrogen persist in many women as a result of conversion of adrenal and ovarian steroids such as androstenedione to estrone and estradiol in adipose and possibly other nonendocrine tissues.

Disturbances of cyclic function are common even during the peak years of reproduction. A minority of these result from inflammatory or neoplastic processes that influence the functions of the uterus,ovaries, or pituitary. Many of the minor disturbances leading to periods of amenorrhea or anovulatory cycles are self-limited. They are often associated with emotional or physical stress and reflect temporary alterations in the stress centers in the brain that control the secretion of GnRH. Anovulatory cycles are also associated with eating disorders (bulimia, anorexia nervosa) and with severe exercise such as distance running and swimming. Among the more com-mon organic causes of persistent ovulatory disturbances are pituitary prolactinomas and syndromes and tumors characterized by excessive ovarian or adrenal androgen production. Normal ovarian function can be modified by androgens produced by the adrenal cortex or tumors arising from it. The ovary also gives rise to androgen-produc-ing neoplasms such as arrhenoblastomas, as well as to estrogen-pro-ducing granulosa cell tumors.