The incidence of serious known toxicities associated with the use of these drugs is low—far lower than the risks associated with pregnancy. There are a number of reversible changes in intermedi-ary metabolism. Minor adverse effects are frequent, but most are mild and many are transient. Continuing problems may respond to simple changes in pill formulation. Although it is not often necessary to discontinue medication for these reasons, as many as one third of all patients started on oral contraception discontinue use for reasons other than a desire to become pregnant.

1. Nausea,mastalgia, breakthrough bleeding, and edema are related to the amount of estrogen in the preparation. These effects can often be alleviated by a shift to a preparation con-taining smaller amounts of estrogen or to agents containing progestins with more androgenic effects.

2. Changes in serum proteins and other effects on endocrine function (see above) must be taken into account when thyroid, adrenal, or pituitary function is being evaluated. Increases in sedimentation rate are thought to be due to increased levels of fibrinogen.

3. Headache is mild and often transient. However, migraine is often made worse and has been reported to be associated with an increased frequency of cerebrovascular accidents. When this occurs or when migraine has its onset during therapy with these agents, treatment should be discontinued.

4. Withdrawal bleeding sometimes fails to occur—most often with combination preparations—and may cause confusion with regard to pregnancy. If this is disturbing to the patient, a different preparation may be tried or other methods of contra-ception used.

Any of the following may require discontinuance of oral contra-ceptives:

1. Breakthrough bleeding is the most common problem in using progestational agents alone for contraception. It occurs in as many as 25% of patients. It is more frequently encountered in patients taking low-dose preparations than in those taking combination pills with higher levels of progestin and estrogen. The biphasic and triphasic oral contraceptives (Table 40–3) decrease breakthrough bleeding without increasing the total hormone content.

2. Weight gain is more common with the combination agents containing androgen-like progestins. It can usually be con-trolled by shifting to preparations with less progestin effect or by dieting.

3. Increased skin pigmentation may occur, especially in dark-skinned women. It tends to increase with time, the incidence being about 5% at the end of the first year and about 40% after 8 years. It is thought to be exacerbated by vitamin B deficiency. It is often reversible upon discontinuance of medication but may disappear very slowly.

5. Hirsutism may also be aggravated by the “19-nortestosterone” derivatives, and combinations containing nonandrogenic progestins are preferred in these patients.

6. Ureteral dilation similar to that observed in pregnancy has been reported, and bacteriuria is more frequent.

7. Vaginal infections are more common and more difficult to treat in patients who are using oral contraceptives.

8. Amenorrhea occurs in some patients. Following cessation of administration of oral contraceptives, 95% of patients with normal menstrual histories resume normal periods and all but a few resume normal cycles during the next few months. How-ever, some patients remain amenorrheic for several years. Many of these patients also have galactorrhea. Patients who have had menstrual irregularities before taking oral contraceptives are particularly susceptible to prolonged amenorrhea when the agents are discontinued. Prolactin levels should be measured in these patients, since many have prolactinomas. 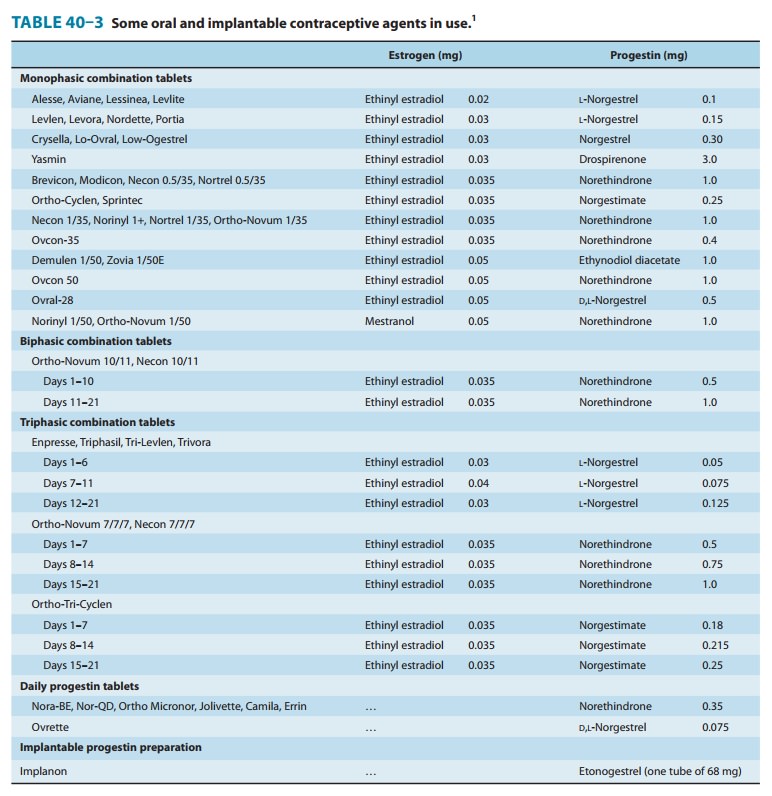 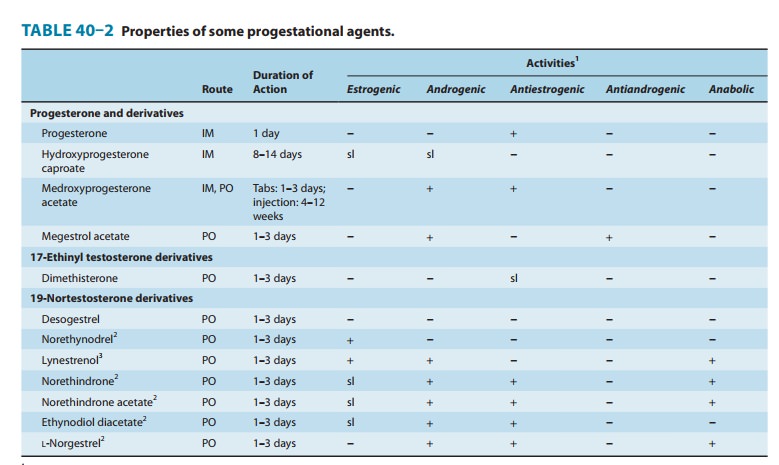 1. Vascular disorders—Thromboembolism was one of theearliest of the serious unanticipated effects to be reported and has been the most thoroughly studied.

a. Venous thromboembolic disease—Superficial or deep throm-boembolic disease in women not taking oral contraceptives occurs in about 1 patient per 1000 woman years. The overall incidence of these disorders in patients taking low-dose oral contraceptives is about threefold higher. The risk for this disorder is increased during the first month of contraceptive use and remains constant for several years or more. The risk returns to normal within a month when use is discontinued. The risk of venous thrombosis or pulmonary embolism is increased among women with predis-posing conditions such as stasis, altered clotting factors such asantithrombin III, increased levels of homocysteine, or injury. Genetic disorders, including mutations in the genes governing the production of protein C (factor V Leiden), protein S, hepatic cofactor II, and others, markedly increase the risk of venous thromboembolism. The incidence of these disorders is too low for cost-effective screening by current methods, but prior episodes or a family history may be helpful in identifying patients with increased risk.

The incidence of venous thromboembolism appears to be related to the estrogen but not the progestin content of oral con-traceptives and is not related to age, parity, mild obesity, or ciga-rette smoking. Decreased venous blood flow, endothelial proliferation in veins and arteries, and increased coagulability of blood resulting from changes in platelet functions and fibrinolytic systems contribute to the increased incidence of thrombosis. The major plasma inhibitor of thrombin, antithrombin III, is substan-tially decreased during oral contraceptive use. This change occurs in the first month of treatment and lasts as long as treatment per-sists, reversing within a month thereafter.

b. Myocardial infarction—The use of oral contraceptives isassociated with a slightly higher risk of myocardial infarction in women who are obese, have a history of preeclampsia or hyper-tension, or have hyperlipoproteinemia or diabetes. There is a much higher risk in women who smoke. The risk attributable to oral contraceptives in women 30–40 years of age who do not smoke is about 4 cases per 100,000 users per year, as compared with 185 cases per 100,000 among women 40–44 who smoke heavily. The association with myocardial infarction is thought to involve acceleration of atherogenesis because of decreased glucose tolerance, decreased levels of HDL, increased levels of LDL, and increased platelet aggregation. In addition, facilitation of coronary arterial spasm may play a role in some of these patients. The progestational component of oral contraceptives decreases HDL cholesterol levels, in proportion to the androgenic activity of the progestin. The net effect, therefore, will depend on the specific composition of the pill used and the patient’s susceptibility to the particular effects. Recent studies suggest that risk of infarc-tion is not increased in past users who have discontinued oral contraceptives.

c. Cerebrovascular disease—The risk of stroke is concentratedin women over age 35. It is increased in current users of oral con-traceptives but not in past users. However, subarachnoid hemor-rhages have been found to be increased among both current and past users and may increase with time. The risk of thrombotic or hemorrhagic stroke attributable to oral contraceptives (based on older, higher-dose preparations) has been estimated to about 37 cases per 100,000 users per year.

In summary, available data indicate that oral contraceptives increase the risk of various cardiovascular disorders at all ages and among both smokers and nonsmokers. However, this risk appears to be concentrated in women 35 years of age or older who are heavy smokers. It is clear that these risk factors must be considered in each individual patient for whom oral contraceptives are being considered. Some experts have suggested that screening for coagu-lopathy should be performed before starting oral contraception.

2. Gastrointestinal disorders—Many cases of cholestaticjaundice have been reported in patients taking progestin-containing drugs. The differences in incidence of these disorders from one population to another suggest that genetic factors may be involved. The jaundice caused by these agents is similar to that produced by other 17-alkyl-substituted steroids. It is most often observed in the first three cycles and is particularly common in women with a his-tory of cholestatic jaundice during pregnancy. Jaundice and pruri-tus disappear 1–8 weeks after the drug is discontinued.

These agents have also been found to increase the incidence of symptomatic gallbladder disease, including cholecystitis and cho-langitis. This is probably the result of the alterations responsible for jaundice and bile acid changes described above.

It also appears that the incidence of hepatic adenomas is increased in women taking oral contraceptives. Ischemic bowel disease secondary to thrombosis of the celiac and superior and inferior mesenteric arteries and veins has also been reported in women using these drugs.

3. Depression—Depression of sufficient degree to require ces-sation of therapy occurs in about 6% of patients treated with some preparations.

4. Cancer—The occurrence of malignant tumors in patientstaking oral contraceptives has been studied extensively. It is now clear that these compounds reduce the risk of endometrial and ovarian cancer. The lifetime risk of breast cancer in the population as a whole does not seem to be affected by oral contraceptive use. Some studies have shown an increased risk in younger women, and it is possible that tumors that develop in younger women become clinically apparent sooner. The relation of risk of cervical cancer to oral contraceptive use is still controversial. It should be noted that a number of recent studies associate the use of oral contraceptives by women who are infected with human papillo-mavirus with an increased risk of cervical cancer.

5. Other—In addition to the above effects, a number of otheradverse reactions have been reported for which a causal relation has not been established. These include alopecia, erythema multi-forme, erythema nodosum, and other skin disorders.