Tamoxifen, a competitive partial agonist inhibitor of estradiol at the estrogen receptor (Figure 40–5), was the first selectiveestrogen receptor modulator (SERM) to be introduced. It isextensively used in the palliative treatment of breast cancer in postmenopausal women and is approved for chemoprevention ofbreast cancer in high-risk women . It is a non-steroidal agent (see structure below) that is given orally. Peak plasma levels are reached in a few hours. Tamoxifen has an initial half-life of 7–14 hours in the circulation and is predominantly excreted by the liver. It is used in doses of 10–20 mg twice daily. Hot flushes and nausea and vomiting occur in 25% of patients, and many other minor adverse effects are observed. Studies of patients treated with tamoxifen as adjuvant therapy for early breast cancer have shown a 35% decrease in contralateral breast cancer. However, adjuvant therapy extended beyond 5 years in patients with breast cancer has shown no further improvement in outcome. Toremifene is a structurally similar compound with very similarproperties, indications, and toxicities. 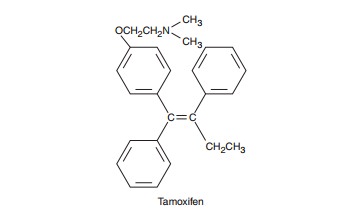 Prevention of the expected loss of lumbar spine bone density and plasma lipid changes consistent with a reduction in the risk for atherosclerosis have also been reported in tamoxifen-treated patients following spontaneous or surgical menopause. However, this agonist activity also affects the uterus and may increase the risk of endometrial cancer.

Raloxifene is another partial estrogen agonist-antagonist(SERM) at some but not all target tissues. It has similar effects on lipids and bone but appears not to stimulate the endometrium or breast. Although subject to a high first-pass effect, raloxifene has a very large volume of distribution and a long half-life (>24 hours), so it can be taken once a day. Raloxifene has been approved in the USA for the prevention of postmenopausal osteoporosis and pro-phylaxis of breast cancer in women with risk factors.

Clomiphene is an older partial agonist, a weak estrogen thatalso acts as a competitive inhibitor of endogenous estrogens (Figure 40–5). It has found use as an ovulation-inducing agent .