Estrogenic activity is shared by a large number of chemical substances.

Estrogenic activity is shared by a large number of chemical substances. In addition to the variety of steroidal estrogens derived from animal sources, numerous nonsteroidal estrogens have been synthesized. Many phenols are estrogenic, and estrogenic activity has been identified in such diverse forms of life as those found in ocean sediments. Estrogen-mimetic compounds (flavonoids) are found in many plants, including saw palmetto, and soybeans and other foods. Studies have shown that a diet rich in these plant products may cause slight estrogenic effects. Additionally, some compounds used in the manufacture of plastics (bisphenols, alkylphenols, phthalate phenols) have been found to be estro-genic. It has been proposed that these agents are associated with an increased breast cancer incidence in both women and men in the industrialized world.

The major estrogens produced by women are estradiol (estradiol-17β, E2), estrone (E1), and estriol (E3) (Figure 40–2). Estradiol is the major secretory product of the ovary. Although some estrone is produced in the ovary, most estrone and estriol are formed in the liver from estradiol or in peripheral tissues from androstenedione and other androgens (see Figure 39–1). As noted above, duringthe first part of the menstrual cycle estrogens are produced in the ovarian follicle by the theca and granulosa cells. After ovulation, the estrogens as well as progesterone are synthesized by the luteinized granulosa and theca cells of the corpus luteum, and the pathways of biosynthesis are slightly different. 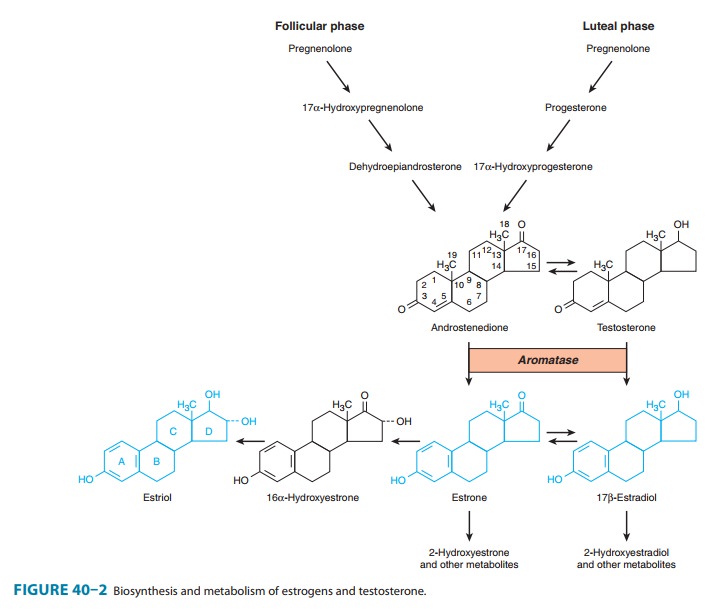 During pregnancy, a large amount of estrogen is synthesized by the fetoplacental unit—consisting of the fetal adrenal zone, secret-ing androgen precursor, and the placenta, which aromatizes it into estrogen. The estriol synthesized by the fetoplacental unit is released into the maternal circulation and excreted into the urine. Repeated assay of maternal urinary estriol excretion has been used in the assessment of fetal well-being.

One of the most prolific natural sources of estrogenic substances is the stallion, which liberates more of these hormones than the pregnant mare or pregnant woman. The equine estrogens—equilenin and equilin—and their congeners are unsaturated in the B as well as the A ring and are excreted in large quantities in urine, from which they can be recovered and used for medicinal purposes.

In normal women, estradiol is produced at a rate that varies during the menstrual cycle, resulting in plasma levels as low as 50 pg/mL in the early follicular phase to as high as 350–850 pg/mL at the time of the preovulatory peak (Figure 40–1).

A variety of chemical alterations have been applied to the natural estrogens. The most important effect of these alterations has been to increase their oral effectiveness. Some structures are shown in Figure 40–3. Those with therapeutic use are listed in Table 40–1. 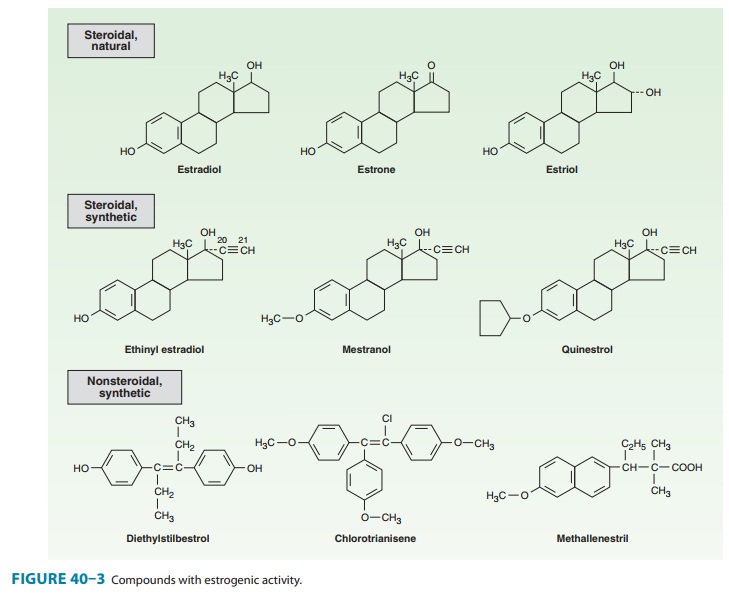 In addition to the steroidal estrogens, a variety of nonsteroidal compounds with estrogenic activity have been synthesized and used clinically. These include dienestrol, diethylstilbestrol, benze-strol, hexestrol, methestrol, methallenestril, and chlorotrianisene (Figure 40–3). 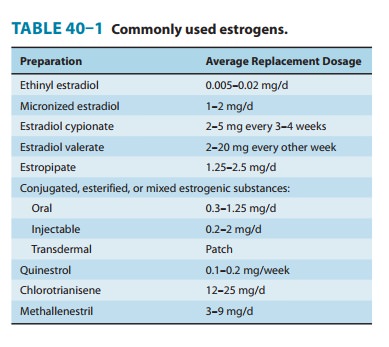 When released into the circulation, estradiol binds strongly to an α2 globulin (sex hormone-binding globulin [SHBG]) and with lower affinity to albumin. Bound estrogen is relatively unavailable for dif-fusion into cells, and it is the free fraction that is physiologically active. Estradiol is converted by the liver and other tissues to estrone and estriol (Figure 40–2) and their 2-hydroxylated derivatives and conjugated metabolites (which are too insoluble in lipid to cross the cell membrane readily) and excreted in the bile. Estrone and estriol have low affinity for the estrogen receptor. However, the conjugates may be hydrolyzed in the intestine to active, reabsorbable com-pounds. Estrogens are also excreted in small amounts in the breast milk of nursing mothers.

Because significant amounts of estrogens and their active metabolites are excreted in the bile and reabsorbed from the intes-tine, the resulting enterohepatic circulation ensures that orally administered estrogens will have a high ratio of hepatic to periph-eral effects. As noted below, the hepatic effects are thought to be responsible for some undesirable actions such as synthesis of increased clotting factors and plasma renin substrate. The hepatic effects of estrogen can be minimized by routes that avoid first-pass liver exposure, ie, vaginal, transdermal, or by injection.