Mifepristone is a “19-norsteroid” that binds strongly to the pro-gesterone receptor and inhibits the activity of progesterone.

Mifepristone is a “19-norsteroid” that binds strongly to the pro-gesterone receptor and inhibits the activity of progesterone. The drug has luteolytic properties in 80% of women when given in the midluteal period. The mechanism of this effect is unknown, but it may provide the basis for using mifepristone as a contraceptive (as opposed to an abortifacient). However, because the compound has a long half-life, large doses may prolong the follicular phase of the subsequent cycle and so make it difficult to use continuously for this purpose.

A single dose of 600 mg is an effective emergency postcoital contraceptive, though it may result in delayed ovulation in the following cycle. As noted, the drug also binds to and acts as an antagonist at the glucocorticoid receptor. Limited clinical studies suggest that mifepristone or other analogs with similar properties may be useful in the treatment of endometriosis, Cushing’s syndrome, breast cancer, and possibly other neoplasms such as meningiomas that contain glucocorticoid or progesterone receptors. 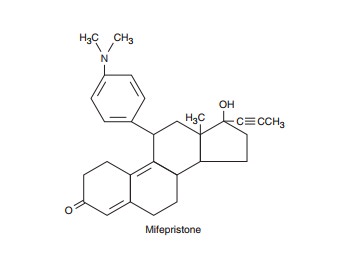 Mifepristone’s major use thus far has been to terminate early pregnancies. Doses of 400–600 mg/d for 4 days or 800 mg/d for 2 days successfully terminated pregnancy in over 85% of the women studied. The major adverse effect was prolonged bleeding that on most occasions did not require treatment. The combina-tion of a single oral dose of 600 mg of mifepristone and a vaginal pessary containing 1 mg of prostaglandin E1 or oral misoprostol has been found to effectively terminate pregnancy in over 95% of patients treated during the first 7 weeks after conception. The adverse effects of the medications included vomiting, diarrhea, and abdominal or pelvic pain. As many as 5% of patients have vaginal bleeding requiring intervention. Because of these adverse effects, mifepristone is administered only by physicians at family planning centers. Note: In a very small number of cases, use of a vaginal tablet for the prostaglandin dose has been associated with sepsis, so it is recommended that both drugs be given by mouth in all patients.

ZK 98734 (lilopristone) is a potent experimental progesterone inhibitor and abortifacient in doses of 25 mg twice daily. Like mifepristone, it also appears to have antiglucocorticoid activity.