Small doses of progestins administered orally or by implantation under the skin can be used for contraception.

Small doses of progestins administered orally or by implantation under the skin can be used for contraception. They are particularly suited for use in patients for whom estrogen administration is undesirable. They are about as effective as intrauterine devices or combination pills containing 20–30 mcg of ethinyl estradiol. There is a high incidence of abnormal bleeding.

Effective contraception can also be achieved by injecting 150 mg of depot medroxyprogesterone acetate (DMPA) every 3 months. After a 150 mg dose, ovulation is inhibited for at least 14 weeks. Almost all users experience episodes of unpredictable spotting and bleeding, particularly during the first year of use. Spotting and bleeding decrease with time, and amenorrhea is common. This preparation is not desirable for women planning a pregnancy soon after cessation of therapy because ovulation sup-pression can sometimes persist for as long as 18 months after the last injection. Long-term DMPA use reduces menstrual blood loss and is associated with a decreased risk of endometrial cancer. Suppression of endogenous estrogen secretion may be associated with a reversible reduction in bone density, and changes in plasma lipids are associated with an increased risk of atherosclerosis.

The progestin implant method utilizes the subcutaneous implantation of capsules containing etonogestrel. These capsules release one fifth to one third as much steroid as oral agents, are extremely effective, and last for 2–4 years. The low levels of hor-mone have little effect on lipoprotein and carbohydrate metabo-lism or blood pressure. The disadvantages include the need for surgical insertion and removal of capsules and some irregular bleeding rather than predictable menses. An association of intra-cranial hypertension with an earlier type of implant utilizing norgestrel was observed in a small number of women. Patients experiencing headache or visual disturbances should be checked for papilledema.

Contraception with progestins is useful in patients with hepatic disease, hypertension, psychosis or mental retardation, or prior thromboembolism. The side effects include headache, dizziness, bloating and weight gain of 1–2 kg, and a reversible reduction of glucose tolerance.

Pregnancy can be prevented following coitus by the administration of estrogens alone, progestin alone, or in combination (“morningafter” contraception). When treatment is begun within 72 hours,it is effective 99% of the time. Some effective schedules are shown in Table 40–4. The hormones are often administered with antie-metics, since 40% of patients have nausea or vomiting. Other adverse effects include headache, dizziness, breast tenderness, and abdominal and leg cramps. 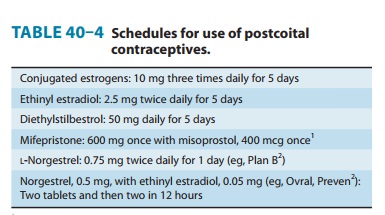 Mifepristone, an antagonist at progesterone and glucocorticoid receptors, has a luteolytic effect and is effective as a postcoital contraceptive. When combined with a prostaglandin it is also an effective abortifacient.

It has become apparent that reduction in the dose of the constitu-ents of oral contraceptives has markedly reduced mild and severe adverse effects, providing a relatively safe and convenient method of contraception for many young women. Treatment with oral contraceptives has also been shown to be associated with many benefits unrelated to contraception. These include a reduced risk of ovarian cysts, ovarian and endometrial cancer, and benign breast disease. There is a lower incidence of ectopic pregnancy. Iron deficiency and rheumatoid arthritis are less common, and premenstrual symptoms, dysmenorrhea, endometriosis, acne, and hirsutism may be ameliorated with their use.