In addition to agents that interfere with aldosterone synthesis (see above), there are steroids that compete with aldosterone for its receptor and decrease its effect peripherally. Progesterone is mildly active in this respect.

In addition to agents that interfere with aldosterone synthesis (see above), there are steroids that compete with aldosterone for its receptor and decrease its effect peripherally. Progesterone is mildly active in this respect.

Spironolactone is a 7α-acetylthiospironolactone. Its onset ofaction is slow, and the effects last for 2–3 days after the drug is discontinued. It is used in the treatment of primary aldosteronism in dosages of 50–100 mg/d. This agent reverses many of the manifestations of aldosteronism. It has been useful in establishing the diagnosis in some patients and in ameliorating the signs and symptoms when surgical removal of an adenoma is delayed. When used diagnostically for the detection of aldosteronism in hypokalemic patients with hypertension, dosages of 400–500 mg/d for 4–8 days—with an adequate intake of sodium and potassium— restore potassium levels to or toward normal. Spironolactone is also useful in preparing these patients for surgery. Dosages of 300–400 mg/d for 2 weeks are used for this purpose and may reduce the incidence of cardiac arrhythmias. 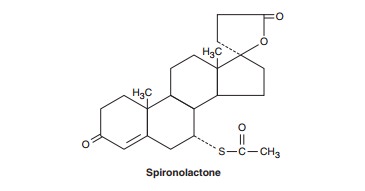 Spironolactone is also an androgen antagonist and as such is sometimes used in the treatment of hirsutism in women. Dosages of 50–200 mg/d cause a reduction in the density, diameter, and rate of growth of facial hair in patients with idiopathic hirsutism or hirsutism secondary to androgen excess. The effect can usually be seen in 2 months and becomes maximal in about 6 months.

Eplerenone,another aldosterone antagonist, is approved forthe treatment of hypertension. Like spironolactone, eplerenone has also been found to reduce mortal-ity in heart failure. This aldosterone receptor antagonist is some-what more selective than spironolactone and has no reported effects on androgen receptors. The standard dosage in hyperten-sion is 50–100 mg/d. The most common toxicity is hyperkalemia, but this is usually mild.

Drospirenone,a progestin in an oral contraceptive, also antagonizes the effects of aldosterone.