Glucocorticoid preparations differ with respect to relative anti-inflammatory and mineralocorticoid effect, duration of action, cost, and dosage forms available (Table 39–1), and these factors should be taken into account in selecting the drug to be used.

Glucocorticoid preparations differ with respect to relative anti-inflammatory and mineralocorticoid effect, duration of action, cost, and dosage forms available (Table 39–1), and these factors should be taken into account in selecting the drug to be used. 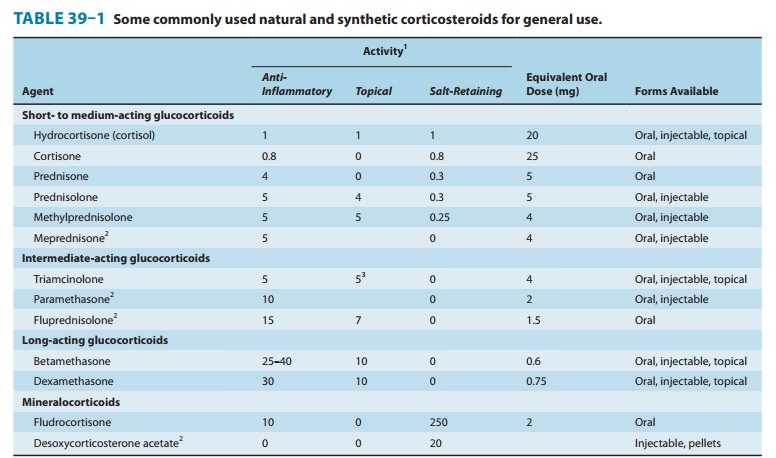 A. ACTH versus Adrenocortical Steroids

In patients with normal adrenals, ACTH was used in the past to induce the endogenous production of cortisol to obtain similar effects. However, except when an increase in androgens is desir-able, the use of ACTH as a therapeutic agent has been abandoned. Instances in which ACTH was claimed to be more effective than glucocorticoids were probably due to the administration of smaller amounts of corticosteroids than were produced by the dosage of ACTH.

In determining the dosage regimen to be used, the physician must consider the seriousness of the disease, the amount of drug likely to be required to obtain the desired effect, and the duration of therapy. In some diseases, the amount required for maintenance of the desired therapeutic effect is less than the dose needed to obtain the initial effect, and the lowest possible dosage for the needed effect should be determined by gradually lowering the dose until a small increase in signs or symptoms is noted.

When it is necessary to maintain continuously elevated plasma corticosteroid levels to suppress ACTH, a slowly absorbed paren-teral preparation or small oral doses at frequent intervals are required. The opposite situation exists with respect to the use of corticosteroids in the treatment of inflammatory and allergic dis-orders. The same total quantity given in a few doses may be more effective than that given in many smaller doses or in a slowly absorbed parenteral form.

Severe autoimmune conditions involving vital organs must be treated aggressively, and undertreatment is as dangerous as over-treatment. To minimize the deposition of immune complexes and the influx of leukocytes and macrophages, 1 mg/kg/d of prednisone in divided doses is required initially. This dosage is main-tained until the serious manifestations respond. The dosage can then be gradually reduced.

When large doses are required for prolonged periods of time, alternate-day administration of the compound may be tried after control is achieved. When used in this manner, very large amounts (eg, 100 mg of prednisone) can sometimes be administered with less marked adverse effects because there is a recovery period between each dose. The transition to an alternate-day schedule can be made after the disease process is under control. It should be done gradu-ally and with additional supportive measures between doses.

When selecting a drug for use in large doses, a medium- or intermediate-acting synthetic steroid with little mineralocorticoid effect is advisable. If possible, it should be given as a single morning dose.

Local therapy, such as topical preparations for skin disease, oph-thalmic forms for eye disease, intra-articular injections for joint disease, inhaled steroids for asthma, and hydrocortisone enemas for ulcerative colitis, provides a means of delivering large amounts of steroid to the diseased tissue with reduced systemic effects.

Beclomethasone dipropionate, and several other glucocorti-coids—primarily budesonide, flunisolide, and mometasone furoate, administered as aerosols—have been found to be extremely useful in the treatment of asthma .

Beclomethasone dipropionate, triamcinolone acetonide, budes-onide, flunisolide, and mometasone furoate are available as nasal sprays for the topical treatment of allergic rhinitis. They are effec-tive at doses (one or two sprays one, two, or three times daily) that in most patients result in plasma levels that are too low to influ-ence adrenal function or have any other systemic effects.

Corticosteroids incorporated in ointments, creams, lotions, and sprays are used extensively in dermatology.