A. Diagnosis and Treatment of Disturbed Adrenal Function

In primary adrenal insufficiency, about 20–30 mg of hydrocor-tisone must be given daily, with increased amounts during periods of stress. Although hydrocortisone has some mineralocorticoid activity, this must be supplemented by an appropriate amount of a salt-retaining hormone such as fludrocortisone. Synthetic gluco-corticoids that are long-acting and devoid of salt-retaining activity should not be administered to these patients.

Acute—When acute adrenocortical insufficiency is suspected,treatment must be instituted immediately. Therapy consists of large amounts of parenteral hydrocortisone in addition to correc-tion of fluid and electrolyte abnormalities and treatment of pre-cipitating factors.

Hydrocortisone sodium succinate or phosphate in doses of 100 mg intravenously is given every 8 hours until the patient is stable. The dose is then gradually reduced, achieving maintenance dosage within 5 days.

The administration of salt-retaining hormone is resumed when the total hydrocortisone dosage has been reduced to 50 mg/d.

·    Congenital adrenal hyperplasia—This group of disorders ischaracterized by specific defects in the synthesis of cortisol. In pregnancies at high risk for congenital adrenal hyperplasia, fetuses can be protected from genital abnormalities by administrationof dexamethasone to the mother. The most common defect is a decrease in or lack of P450c21 (21β-hydroxylase) activity.∗

As can be seen in Figure 39–1, this would lead to a reduction in cortisol synthesis and thus produce a compensatory increase in ACTH release. The gland becomes hyperplastic and produces ab-normally large amounts of precursors such as 17-hydroxyproges-terone that can be diverted to the androgen pathway, leading to virilization. Metabolism of this compound in the liver leads to pregnanetriol, which is characteristically excreted into the urine in large amounts in this disorder and can be used to make the diag-nosis and to monitor efficacy of glucocorticoid substitution. However, the most reliable method of detecting this disorder is the increased response of plasma 17-hydroxyprogesterone to ACTH stimulation. 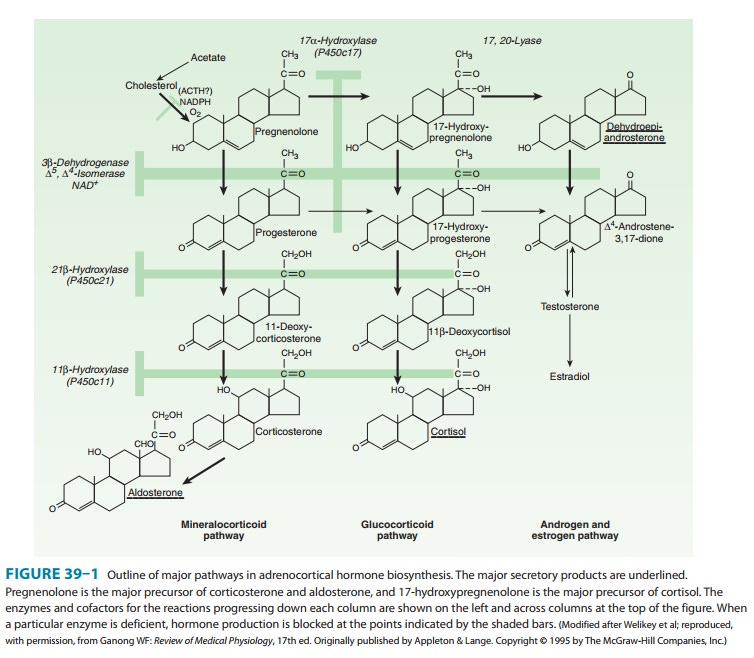 If the defect is in 11-hydroxylation, large amounts of deoxycor-ticosterone are produced, and because this steroid has mineralocor-ticoid activity, hypertension with or without hypokalemic alkalosis ensues. When 17-hydroxylation is defective in the adrenals and gonads, hypogonadism is also present. However, increased amounts of 11-deoxycorticosterone are formed, and the signs and symptoms associated with mineralocorticoid excess—such as hypertension and hypokalemia—are also observed.

When first seen, the infant with congenital adrenal hyperplasia may be in acute adrenal crisis and should be treated as described above, using appropriate electrolyte solutions and an intravenous preparation of hydrocortisone in stress doses.

Once the patient is stabilized, oral hydrocortisone, 12–18 mg/m2/d in two unequally divided doses (two thirds in the morning, one third in late afternoon) is begun. The dosage is adjusted to allow normal growth and bone maturation and to prevent androgen excess. Alternate-day therapy with prednisone has also been used to achieve greater ACTH suppression without increasing growth inhi-bition. Fludrocortisone, 0.05–0.2 mg/d, should also be adminis-tered by mouth, with added salt to maintain normal blood pressure, plasma renin activity, and electrolytes.

Cushing’s syndrome—Cushing’s syndrome is usually the resultof bilateral adrenal hyperplasia secondary to an ACTH-secreting pituitary adenoma (Cushing’s disease) but occasionally is due to tumors or nodular hyperplasia of the adrenal gland or ectopic pro-duction of ACTH by other tumors. The manifestations are those associated with the chronic presence of excessive glucocorticoids. When glucocorticoid hypersecretion is marked and prolonged, a rounded, plethoric face and trunk obesity are striking in appear-ance. The manifestations of protein loss are often found and include muscle wasting; thinning, purple striae, and easy bruising of the skin; poor wound healing; and osteoporosis. Other serious disturbances include mental disorders, hypertension, and diabetes. This disorder is treated by surgical removal of the tumor produc-ing ACTH or cortisol, irradiation of the pituitary tumor, or resec-tion of one or both adrenals. These patients must receive large doses of cortisol during and after the surgical procedure. Doses of up to 300 mg of soluble hydrocortisone may be given as a continu-ous intravenous infusion on the day of surgery. The dose must be reduced slowly to normal replacement levels, since rapid reduction in dose may produce withdrawal symptoms, including fever and joint pain. If adrenalectomy has been performed, long-term main-tenance is similar to that outlined above for adrenal insufficiency.

c. Primary generalized glucocorticoid resistance (Chrousos) syndrome—This rare sporadic or familial genetic condition isusually due to inactivating mutations of the glucocorticoid recep-tor gene. In its attempt to compensate for the defect, the hypo-thalamic-pituitary-adrenal (HPA) axis is hyperfunctioning with the increased production of ACTH leading to high circulating levels of cortisol and cortisol precursors such as corticosterone and 11-deoxycorticosterone with mineralocorticoid activity, as well as of adrenal androgens. These may result in hypertension with or without hypokalemic alkalosis and hyperandrogenism expressed as virilization and precocious puberty in children and acne, hir-sutism, male pattern baldness, and menstrual irregularities (mostly oligo-amenorrhea and hypofertility) in women. The therapy of this syndrome is high doses of synthetic glucocorticoids such as dexamethasone with no inherent mineralocorticoid activity. These doses are titrated to normalize the production of cortisol, cortisol precursors, and adrenal androgens.

d. Aldosteronism—Primary aldosteronism usually results fromthe excessive production of aldosterone by an adrenal adenoma. However, it may also result from abnormal secretion by hyperplasticglands or from a malignant tumor. The clinical findings of hyper-tension, weakness, and tetany are related to the continued renal loss of potassium, which leads to hypokalemia, alkalosis, and elevation of serum sodium concentrations. This syndrome can also be produced in disorders of adrenal steroid biosynthesis by excessive secretion of deoxycorticosterone, corticosterone, or 18-hydroxycorticosterone— all compounds with inherent mineralocorticoid activity.

In contrast to patients with secondary aldosteronism (see text that follows), these patients have low (suppressed) levels of plasma renin activity and angiotensin II. When treated with fludrocorti-sone (0.2 mg twice daily orally for 3 days) or deoxycorticosterone acetate (20 mg/d intramuscularly for 3 days—but not available in the USA), patients fail to retain sodium and the secretion of aldos-terone is not significantly reduced. When the disorder is mild, it may escape detection if serum potassium levels are used for screen-ing. However, it may be detected by an increased ratio of plasma aldosterone to renin. Patients generally improve when treated with spironolactone, an aldosterone receptor-blocking agent, and the response to this agent is of diagnostic and therapeutic value.

3. Use of glucocorticoids for diagnostic purposes—It issometimes necessary to suppress the production of ACTH to iden-tify the source of a particular hormone or to establish whether its production is influenced by the secretion of ACTH. In these cir-cumstances, it is advantageous to use a very potent substance such as dexamethasone because the use of small quantities reduces the possibility of confusion in the interpretation of hormone assays in blood or urine. For example, if complete suppression is achieved by the use of 50 mg of cortisol, the urinary 17-hydroxycorticosteroids will be 15–18 mg/24 h, since one third of the dose given will be recovered in urine as 17-hydroxycorticosteroid. If an equivalent dose of 1.5 mg of dexamethasone is used, the urinary excretion will be only 0.5 mg/24 h and blood levels will be low.

The dexamethasone suppression test is used for the diagnosis of Cushing’s syndrome and has also been used in the differential diagnosis of depressive psychiatric states. As a screening test, 1 mg dexamethasone is given orally at 11 PM, and a plasma sample is obtained the following morning. In normal individuals, the morn-ing cortisol concentration is usually less than 3 mcg/dL, whereas in Cushing’s syndrome the level is usually greater than 5 mcg/dL. The results are not reliable in the patient with depression, anxiety, con-current illness, and other stressful conditions or in the patient who is receiving a medication that enhances the catabolism of dexame-thasone in the liver. To distinguish between hypercortisolism due to anxiety, depression, and alcoholism (pseudo-Cushing syndrome) and bona fide Cushing’s syndrome, a combined test is carried out, consisting of dexamethasone (0.5 mg orally every 6 hours for 2 days) followed by a standard corticotropin-releasing hormone (CRH) test (1 mg/kg given as a bolus intravenous infusion 2 hours after the last dose of dexamethasone).

In patients in whom the diagnosis of Cushing’s syndrome has been established clinically and confirmed by a finding of elevated free cortisol in the urine, suppression with large doses of dexa-methasone will help to distinguish patients with Cushing’s disease from those with steroid-producing tumors of the adrenal cortex or with the ectopic ACTH syndrome. Dexamethasone is given in adosage of 0.5 mg orally every 6 hours for 2 days, followed by 2 mg orally every 6 hours for 2 days, and the urine is then assayed for cortisol or its metabolites (Liddle’s test); or dexamethasone is given as a single dose of 8 mg at 11 PM, and the plasma cortisol is mea-sured at 8 AM the following day. In patients with Cushing’s dis-ease, the suppressant effect of dexamethasone usually produces a 50% reduction in hormone levels. In patients in whom suppres-sion does not occur, the ACTH level will be low in the presence of a cortisol-producing adrenal tumor and elevated in patients with an ectopic ACTH-producing tumor.

B. Corticosteroids and Stimulation of Lung Maturation in the Fetus

Lung maturation in the fetus is regulated by the fetal secretion of cortisol. Treatment of the mother with large doses of glucocorti-coid reduces the incidence of respiratory distress syndrome in infants delivered prematurely. When delivery is anticipated before 34 weeks of gestation, intramuscular betamethasone, 12 mg, followed by an additional dose of 12 mg 18–24 hours later, is commonly used. Betamethasone is chosen because maternal pro-tein binding and placental metabolism of this corticosteroid is less than that of cortisol, allowing increased transfer across the placenta to the fetus.

The synthetic analogs of cortisol are useful in the treatment of a diverse group of diseases unrelated to any known disturbance of adrenal function (Table 39–2). The usefulness of corticosteroids in these disorders is a function of their ability to suppress inflamma-tory and immune responses and to alter leukocyte function, as previously described. These agents are useful in disorders in which host response is the cause of the major manifestations of the disease. In instances in which the inflammatory or immune response is important in controlling the pathologic process, therapy with corticosteroids may be dangerous but justified to prevent irreparable damage from an inflammatory response—if used in conjunction with specific therapy for the disease process. 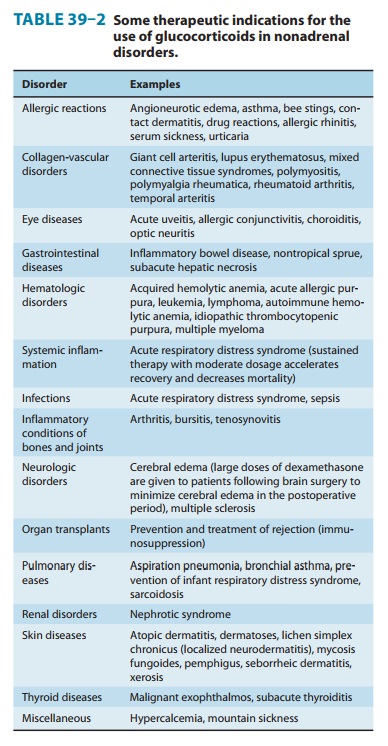 Since corticosteroids are not usually curative, the pathologic process may progress while clinical manifestations are suppressed. Therefore, chronic therapy with these drugs should be undertaken with great care and only when the seriousness of the disorder warrants their use and when less hazardous measures have been exhausted.

In general, attempts should be made to bring the disease process under control using medium- to intermediate-acting glucocorti-coids such as prednisone and prednisolone (Table 39–1), as well as all ancillary measures possible to keep the dose low. Where possible, alternate-day therapy should be used (see the following text). Therapy should not be decreased or stopped abruptly. When pro-longed therapy is anticipated, it is helpful to obtain chest x-rays and a tuberculin test, since glucocorticoid therapy can reactivate dormant tuberculosis. The presence of diabetes, peptic ulcer, osteo-porosis, and psychological disturbances should be taken into con-sideration, and cardiovascular function should be assessed.

Treatment for transplant rejection is a very important applica-tion of glucocorticoids. The efficacy of these agents is based on their ability to reduce antigen expression from the grafted tissue, delay revascularization, and interfere with the sensitization of cytotoxic T lymphocytes and the generation of primary antibody-forming cells.