This device is used in the IBM PC and is therefore probably the most used DMA controller in current use. Like most peripher-als today, it has moved from being a separate entity to be part of the PC chip set that has replaced the 100 or so devices in the original design with a single chip.

It can support four main transfer modes including single and block transfers, the demand mode and a special cascade mode where additional 8237 DMA controllers can be cascaded to ex-pand the four channels that a single device can support. It can transfer data between a peripheral and memory and by combining two channels together, perform memory to memory transfers although this is not used or supported within the IBM PC environ-ment. In addition, there is a special verify transfer mode which is used within the PC to generate dummy addresses to refresh the DRAM memory. This is done in conjunction with a 15 µs interrupt derived from a timer channel on the PC motherboard.

To resolve simultaneous DMA requests, there is an internal arbitration scheme which supports either a fixed or rotating priority scheme. 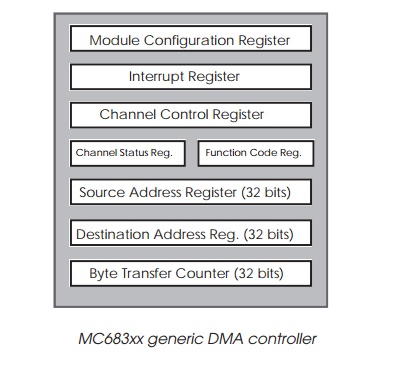 It consists of a two channel fully programmable DMA controller that can support high speed data transfer rates of 12.5 Mbytes/s in dual address transfer mode or 50 Mbytes/s in single address mode at a 25 MHz clock rate. The dual address mode is considerably slower because two cycles have to be performed as previously described. By virtue of its integration onto the proces-sor chip with the peripherals and internal memory, it can DMA data between internal and external resources. Internal cycles can be programmed to occupy 25, 50, 75, or 100% of the available internal bus bandwidth while external cycles support burst and single transfer mode.

The source and destination registers can be independently programmed to remain constant or incremented as required.

Using another CPU with firmware

This is a technique that is sometimes used where a DMA controller is not available or is simply not fast or sophisticated enough. The DMA CPU requires its own local memory and program so that it can run in isolation and not burden the main memory bus. The DMA CPU is sent messages which instruct it on how to perform its DMA operations. The one advantage that this offers is that the CPU can be programmed with higher level software which can be used to process the data as well as transfer it. Many of the processors used in embedded systems fall into this category of device.