A good example of a simple timer is the Intel 8253 which is used in the IBM PC.

A good example of a simple timer is the Intel 8253 which is used in the IBM PC. The device has three timer/counters which provide a periodic ‘tick’ for the system clock, a regular interrupt every 15 µs to perform a dynamic memory refresh cycle and, finally, a source of square waveforms for use as audio tones with the built-in speaker. Each timer/counter supports six modes which cover most of the simple applications for timer/counters.

This is known as mode 0 for the 8253 and is probably the simplest of its operations to understand. An initial value is loaded into the counter register and this then immediately starts to count down at the frequency determined by the clock input. When the counter reaches zero, an interrupt is generated. 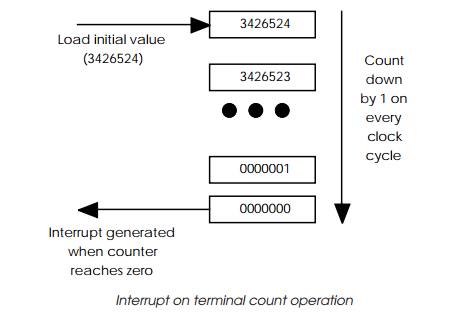 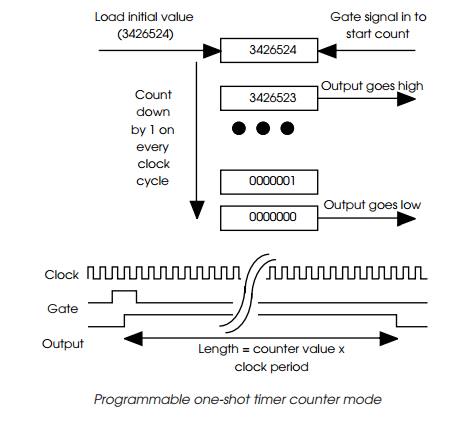 The pulse duration is determined by the initial value loaded into the counter times the clock period. While this is a common timer/counter mode, many devices such as the 8253 incorporate a reset. If the gate signal is pulled low and then high again to create a new rising edge while the counter is counting down, the current count value is ignored and replaced by the initial value and the count continued. This means that the output pulse length will be extended by the time between the two gate rising edges.

This mode can be used to provide pulse width modulation for power control where the gate is connected to a zero crossing or similar detector or clock source to create a periodic signal. 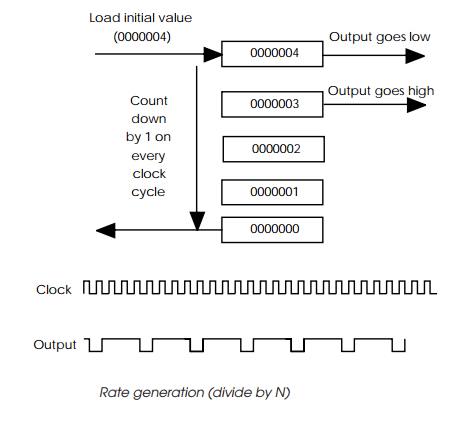 Mode 4 is similar to mode 3 except that the waveform is a square wave with a 50:50 mark/space ratio. This is achieved by extending the low period and by reducing the high period to half the clock cycles specified by the initial counter value.

When mode 4 is enabled, the counter will start to count as soon as it is loaded with its initial value. When it reaches zero, the output is pulsed low for a single clock period and then goes high again. If the counter is reloaded by software before it reaches zero, the output does not go low. This can be used as a software-based watchdog timer where the output is connected to a non-maskable interrupt line or a system reset. 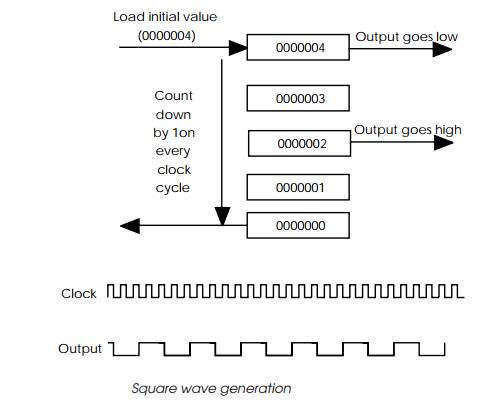 Mode 5 is similar to mode 4 except that the retriggering is done by the external gate pin acting as a trigger signal.

The 8253 has no specific interrupt pins and therefore the timer OUT pin is often used to generate an external interrupt signal. With the IBM PC, this is done by connecting the OUT signal from timer/counter 0 to the IRQ 0 signal and setting the timer/ counter to run in mode 3 to generate a square wave. The input clock is 1.19318 MHz and by using a full 16 bit count value, is divided by 65536 to provide a 18.3 Hz timer tick. This is counted by the software to provide a time of day reference and to provide a system tick.