Serial ports are a pin efficient method of communicating between other devices within an embedded system. With microcontrollers which do not have an external extension bus, they can provide the only method of adding additional functionality.

Serial ports are a pin efficient method of communicating between other devices within an embedded system. With microcontrollers which do not have an external extension bus, they can provide the only method of adding additional functionality. 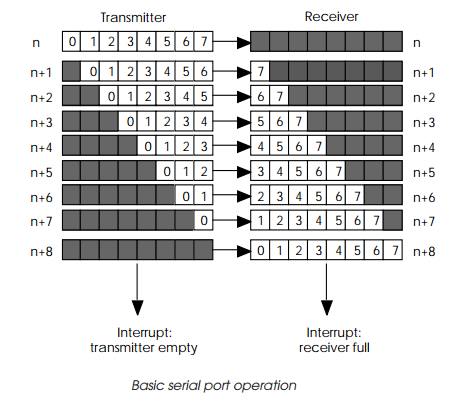 The simplest serial ports are essentially a pair of shift registers that are connected together with one input (receiver) connected to the output of the other to create a transmitter. They are clocked together by a common clock and thus data is transmit-ted from one register to the other. The time taken is dependent on the clock frequency and the number of bits that are transferred. The shift registers are normally 8 bits wide. When the transmitter is emptied, it can be made to generate a local interrupt which can indicate to the processor that the byte has been transferred and/ or that the next byte should be loaded into the register. The receiver can also generate an interrupt when the complete byte is received to indicate that it is ready for reading. 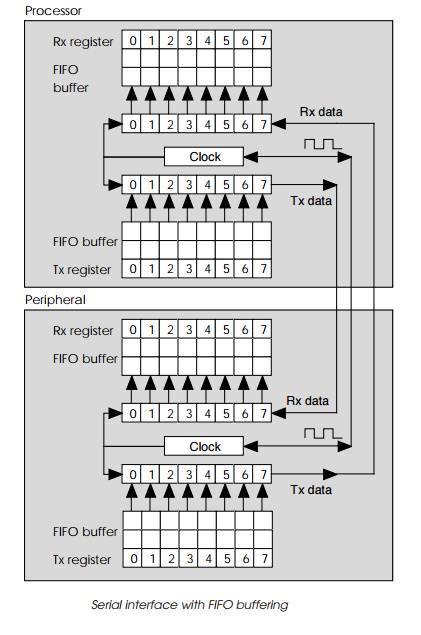 Most serial ports use a FIFO as a buffer so that data is not lost. This can happen if data is transmitted before the preceding byte has been read. With the FIFO buffer, the received byte is transferred to it when the byte is received. This frees up the shift register to receive more bits without losing the data. The FIFO buffer is read to receive the data hence the acronym’s derivation — first in, first out. The reverse can be done for the transmitter so that data can be sent to the transmitter before the previous value has been sent.

The size of the FIFO buffer is important in reducing proces-sor overhead and increasing the serial port’s throughput as will be explained in more detail later on. The diagram shows a generic implementation of a serial interface between a processor and peripheral. It uses a single clock signal which is used to clock the shift registers in each transmitter and receiver. The shift registers each have a small FIFO for buffering. The clock signal is shown as being bidirectional: in practice it can be supplied by one of the devices or by the device that is transmitting. Obviously care has to be taken to prevent the clock from being generated by both sides and this mistake is either prevented by software protocol or through the specification of the interface.