Probably the most commonly known and used UART is the 8250 and its derivatives as used to provide serial ports COM1 and COM2 on an IBM PC. The original design used an Intel 8250 which has been largely replaced by the National Semiconductor 16450 and 16550 devices or by cloned devices within a super I/O chip which combines all the PC’s I/O devices into a single piece of silicon. 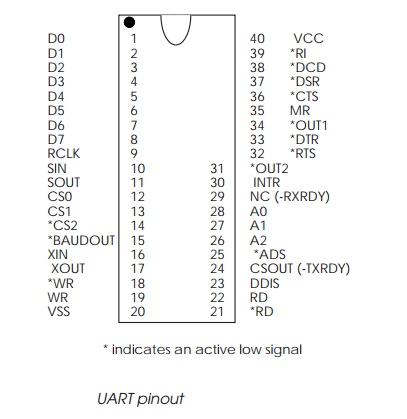 The original devices used voltage level shifters to provide the + and –12 volt RS232 signalling voltage levels but this function is sometimes included within the UART as well.

The UART interface signals are for the 8250 UART and its derivatives are as follows:

*ADS         This is the address strobe signal and is used to latch the address and chip select signals during a processor access. The latching takes place on the positive edge of the and assumes that the other signals are stable at this point. This signal can be ignored by permanently asserting it. In this case, the address and chip selects must be set up and stable for the whole cycle with the processor and peripheral clock signals providing the timing references. The IBM PC uses the chip in this way.

*BAUDOUT       This is the 16x clock signal from the transmitter section of the UART. The clock frequency is the main clock frequency divided by the values stored in the baud generator divisor latches. It is normally used — as in the IBM PC, for example — to route the transmit clock back into the receive section by connecting this pin to the RCLK pin. By doing this, both the transmit and receive baud rates are the same and use the same clock frequency. To create an asynchronous system such as 1200/75 which is used for teletext links, an external transmit clock is used to feed RCLK instead.

CS0,1 and 2        These signals are used to select the UART and are derived from the rest of the processor’s address signals. The lower 3 bits of the CPU address bus are connected to the A0–A2 pins to select the internal registers. The rest of the address bus is decoded to generate a chip select signal. This can be a single entity, in which case two of the chip selects are tied to the appropriate logic level. If the signal is low, then CS0 and CS1 would be tied high. The provision of these three chip selects provides a large amount of flexibility. The truth table is shown below. 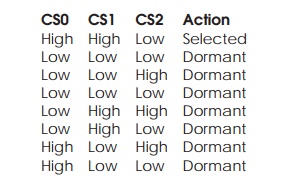 D0–D7        These signals form the 8 bit bus that is connected between the peripheral and the processor. All  transfers between the UART and processor are  byte based.

DDIS This goes low whenever the CPU is reading data from the UART. It can be used to control bus arbitration logic.

INTR          This pin is normally connected to an interrupt pin on the processor or in the case of the IBM PC, the interrupt controller. It is asserted when the UART needs data to be transferred to or from the internal buffers, or if an error condition has occurred such as a data overrun. The ISR has to investigate the UART’s status registers to determine the actual service(s) requested by the peripheral.

MR   This is the master reset pin and is used to reset the device and restore the internal registers to their power-on default values. This is normally connected to the system/processor reset signal to ensure that the UART is reset when the system is.

*OUT2       This is another general-purpose I/O pin whose state can be set by programming bit 3 of the MCR ‘1’. In the IBM PC it is used to gate the interrupt signal from the UART to the interrupt controller. In this way, interrupts from the UART can be externally disabled.

RCLK        This is the input for the clock for the receiver section of the chip. See *BAUDOUT on the  previous page for more details.

RD, *RD    These are read strobes that are used to indicate the type of access that the CPU needs to perform. If RD is high or *RD is low, the CPU access is a read cycle.

SIN   This is the serial data input pin for the receiver.

SOUT         This is the serial data output pin for the transmitter.

*RXRDY,*TXRDY These pins are used for additional DMA control and can be used to initiate DMA transfers to and from the read and write buffers. They are not used within the IBM PC design where the CPU is responsible for moving data to and from the UART.

A0–2          These are the three address signals which are used in conjunction with DLAB to select the internal registers. They are normally connected to the lower bits of the processor address bus. The upper bits are normally decoded to create a set of chip select signals to select the UART and locate it at a specific address location.

The main difference between the various devices concerns the buffer size that they support and, in particular, the effect that it has on the effective throughput of the UART.

The UART relies on the CPU to transfer data and therefore the limit on the serial data throughput that can be sustained is determined by the time it takes to interrupt the CPU and for the appropriate interrupt service routine to identify the reason for the interrupt — it may have been raised as a result of an error — and then transfer the data if the interrupt corresponds to a data ready for transfer request. Finally, the processor returns from the inter-rupt.

The time to perform this task is determined by the processor type and memory speed. The time then defines the maximum rate that data can be received. If the interrupt service routine takes longer than the time to receive the next data, there is a large risk that a data overrun will occur where data is received before the previous byte is read by the processor. To address this issue, a buffer is often used. With the later versions of the UART such as the 16450 and 16550, the FIFO buffer size has been increased. The largest buffer (16 bytes) is available on the 16550 and this device is frequently used for high speed data communications.

The 16 byte buffer means that if the processor is late for the first byte, any incoming data will simply be buffered and not cause a data overrun. As a result, the interrupt service routine need only be executed 1/16 of the times for a single buffer UART. This dramatically reduces the CPU processing needed for high speed data transfer.

There is a downside: the data now arrives in a packet with up to 16 bytes and must be processed slightly differently. With a byte at a time, the decoding of the data (i.e. is it a command or is it data that a higher level protocol may impose?) is easy to decode. With a packet of up to 16 bytes, the bytes have to be parsed to separate them out. This means that the decoding software is slightly more complex to handle both the parsing and the mecha-nisms to store and track the incoming data packets. An example of this in included in the chapter on buffers.

Within the Motorola product offering, the MC68681 has become a fairly standard UART that has been used in many MC680x0 designs. It has a quadruple buffered receiver and a double buffered transmitter. The maximum transfer rates that can be achieved are high: 9.8 Mbps with a 25 MHz clock with no clock division (×1 mode) and 612 kbps with the same clock with a divide by 16 setting (×16 mode). Each transmitter and receiver is inde-pendently programmable using one of 19 fixed rates.

It has a sophisticated interrupt structure that supports seven maskable interrupt conditions:

This is used to support hardware handshaking. If the CTS signal changes, an interrupt can be generated to instruct the processor to stop or start sending data. This fast response coupled with the buffering ensures that data is not lost.

As previously discussed, interrupts are ideal for the effi-cient handling and control of receive buffers. This interrupt indicates that there is data ready.

This is similar to the previous interrupt and is used to indicate that the transmitter is ready to take data for trans-mission.