Flow control is necessary to prevent either the terminal or the computer from sending more data than the other can cope with. If too much is sent, it either results in missing characters or in a data overrun error message.

Flow control is necessary to prevent either the terminal or the computer from sending more data than the other can cope with. If too much is sent, it either results in missing characters or in a data overrun error message. The first flow control method is hardware handshaking, where hardware in the UART detects a potential overrun and asserts a handshake line to tell the other UART to stop transmitting. When the receiving device can take more data, the handshake line is released. The problem with this is that there are several options and, unless the lines are correctly connected, the handshaking does not work correctly and data loss is possible. The second method uses software to send flow control characters XON and XOFF. XOFF stops a data transfer and XON restarts it. Unfortunately, there are many different ways of using these lines and, as a result, this so-called standard has many different implementations. There are alternative methods of ad-dressing this problem by adding buffers to store data when it cannot be accepted.

The two most common connectors are the 25 pin D type and the 9 pin D type. These are often referred to as DB-25 and DB-9 respectively. Their pin assignments are as follows:

There are many different methods of connecting these pins and this has caused many problems especially for those faced with the task of implementing the software for a UART in such a configuration. To implement hardware handshaking, individual I/O pins are used to act as inputs or outputs for the required signals. The functionality of the various signals is as follows:

TXD  Transmit data. This transmits data and would normally be connected to the RXD signal on the other side of the connection.

RXD  Receive data. This transmits data and would normally be connected to the TXD signal on the other side of the connection. In this way, there is a cross-over connection.

DCD                     Data carrier detect. This is normally used to determine which side is in control of the hardware handshake protocol.

Much of the functionality of these signals has been deter-mined by the need to connect to modems initially to allow remote communication across telephone lines. While modem links are still important, many serial lines are used in modemless links to peripherals such as printers. In these cases, the interchange of signals which the modem performs must be simulated within the cabling and this is done using a null modem cable. The differences are best shown by looking at some example serial port cables.

These are known as modem or straight through cables because the connections are simply one to one with no crossing over or other more complex wiring. They are used to link PCs with modems, printers, plotters and other peripherals. However, do not use them when linking a PC to another PC or computer — they won’t work! For those links, a null modem cable is needed.

Null modem cables are used to link PCs together. They work by switching over the transmit and receive signals and the handshaking connections so that each PC ‘sees’ a modem at the other end. There are many configurations depending on the number of wires that are needed within the cable. 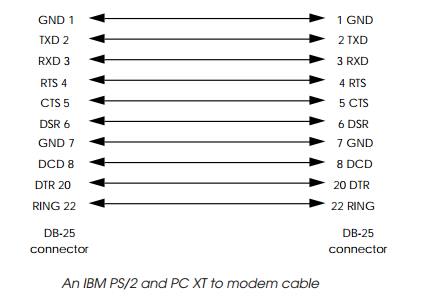 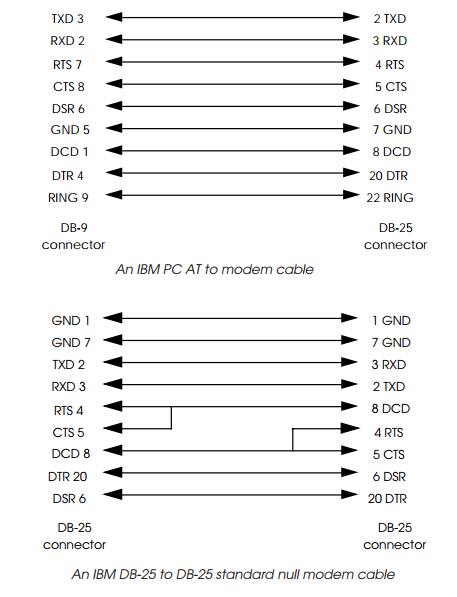 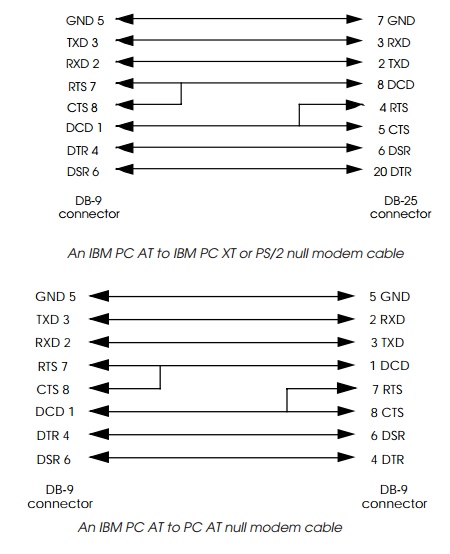 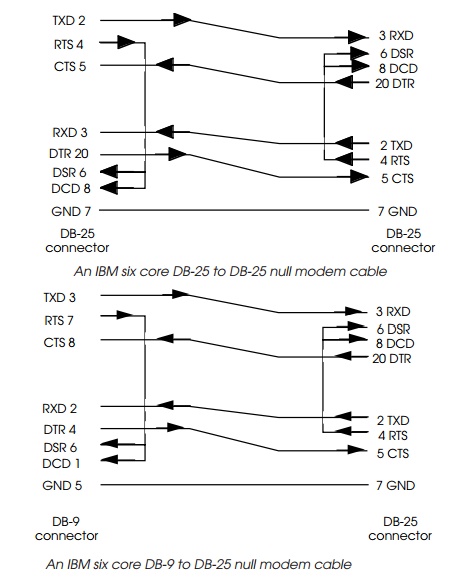 Connecting these wires together and using the correct pins is not a trivial job and two alternative approaches have been developed. The first is the development of more intelligent UARTs that handle the flow control directly with little or no intervention from the processor. The second is to dispense with hardware handshaking completely and simply use software handshaking where characters are sent to control the flow of characters between the two systems. This latter approach is used by Apple Macintosh, UNIX and many other systems because of its reduced complexity in terms of the hardware interface and wiring.

With the XON-XOFF protocol, an XOFF character (control-S or ASCII code 13) is sent to the other side to tell it to stop sending any more data. The halted side will wait until it receives an XON character (control-Q or ASCII code 11) before recommencing the data transmission. This technique does assume that each side can receive the XOFF character and that transmission can be stopped before overflowing the other side’s buffer.