Up until now, the serial interfaces that have been described have used a clock signal as a reference and therefore the data transfers are synchronous to that clock.

Up until now, the serial interfaces that have been described have used a clock signal as a reference and therefore the data transfers are synchronous to that clock. For the small distances between chips, this is fine and the TTL or CMOS logic voltages are sufficient to ensure operation over the small connection distances. However, this is not the case if the serial data is being transmitted over many metres. The low voltage logic levels can be affected by the cable capacitance and thus a logic one at the transmitter may be seen as an indeterminate voltage at the receiver end. Clock edges can become skewed and out of sync with the data causing the wrong data to be accepted. As a result, a slightly different serial port is used for connecting over longer distances, generically referred to an RS232.

For most people, the mention of RS232 immediately brings up the image and experiences of connecting peripherals to the ubiquitous IBM PC. The IBM PC typically has one or two serial ports, COM1 and COM2, which are used to transfer data between the PC and printers, modems and even other computers. The term ‘serial’ comes from the fact that only one data line is used to transmit and receive data and thus the information must be sent and received a bit at a time. Instead of transmitting the 8 bits that make up a byte using eight data lines at once, one data line is used to send 8 bits, one at a time. In practice, several lines are used to provide separate lines for data transmit and receive, and to pro-vide a control line for hardware handshaking. One important difference is that the data is transmitted asynchronously i.e. there is no separate reference clock. Instead the data itself provides its own reference clock in terms of its format.

The serial interface can be divided into two areas. The first is the physical interface, commonly referred to as RS232 or EIA232, which is used to transfer data between the terminal and the computer. The electrical interface uses a combination of +5, +12 and –12 volts for the electrical interface. This used to require the provision of additional power connections but there are now available interface chips that take a 5 volt supply (MC1489) and generate internally the other voltages that are needed to meet the interface specification. Typically, a logic one is signalled by a +3 to +15 volts level and a logic zero by –3 to –15 volts. Many systems use +12 and –12 volts.

Note:                             The term RS232 strictly specifies the physical inter-face and not the serial protocol. Partly because RS232 is easier to say than universal asynchronous commu-nication using an RS232 interface, the term has be-come a general reference to almost any asynchro-nous serial communication.

The second area controls the flow of information between the terminal and computer so that neither is swamped with data it cannot handle. Again, failure to get this right can cause data corruption and other problems.

When a user presses a key, quite a lengthy procedure is carried out before the character is transmitted. The pressed key generates a specific code which represents the letter or other character. This is converted to a bit pattern for transmission down the serial line via the serial port on the computer system. The converted bit pattern may contain a number of start bits, a number of bits (5, 6, 7 or 8) representing the data, a parity bit for error checking and a number of stop bits. These are all sent down the serial line by a UART (universal asynchronous receiver transmit-ter) in the terminal at a predetermined speed or baud rate.

The start bits are used to indicate that the data being transmitted is the start of a character. The stop bits indicate that character has ended and thus define the data sequence that con tains the data. The parity bit can either be disabled, i.e. set to zero or configured to support odd or even parity. The bit is set to indicate that the total number of bits that have been sent is either an odd or even number. This allows the receiving UART to detect a single bit error during transmission or reception. The bit sequencing and resultant waveform is asynchronous in that there is not a reference clock transmitted. The data is detected by using a local clock reference, i.e. from the baud rate generator and the start/stop bit edges. This is why it is so important not only to configure the data settings but to set the correct baud rate settings so that the individual bits are correctly interpreted. As a result, both the processor and the peripheral it is communicating with must use the same baud rate and the same combination of start, stop, data and parity bits to ensure correct communication. If different combinations are used, data will be wrongly interpreted. 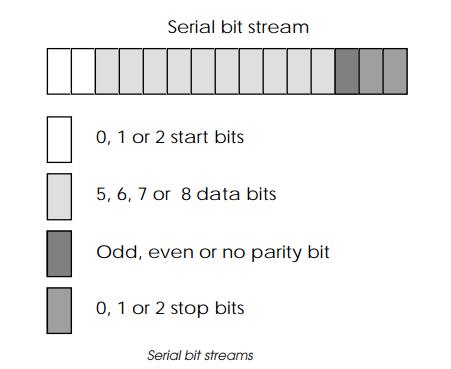 If the terminal UART is configured in half duplex mode, it echoes the transmitted character so it can be seen on the screen. Once the data is received at the other end, it is read in by another UART and, if this UART is set up to echo the character, it sends it back to the terminal. (If both UARTs are set up to echo, multiple characters are transmitted!) The character is then passed to the application software or operating system for further processing.

If the other peripheral or processor is remote, the serial line may include a modem link where the terminal is connected to a modem and a telephone line, and a second modem is linked to the computer at the other end. The modem is frequently controlled by the serial line, so if the terminal is switched off, the modem effectively hangs up and disconnects the telephone line. Modems can also echo characters and it is possible to get four characters on the terminal screen in response to a single key stroke. 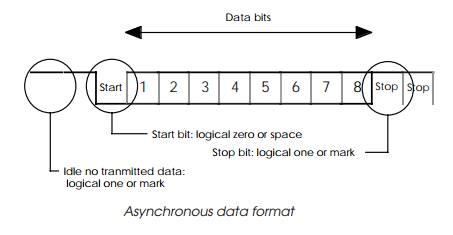 The actual data format for the sequence is shown in the diagram. When no data is transmitted, the TXD signal is set to a logical one. When data is transmitted, a start bit is sent by setting the line to a logical zero. Data is then sent by setting the data to a zero or one accordingly and finally the stop bits are sent by forcing the line to a logical one. The stop bits essentially look the same as the idle bits when no data is being transmitted. The timing is defined by the baud rate that both the receiver and transmitter are using. The baud rate used to be supplied by an external timer/ counter called a baud rate generator that generates a clock signal at the right frequency. This function is now performed on-chip with modern controller chips and usually can work with the system clock or with a simple watch crystal instead of one with a specific frequency.

Note: If the settings are slightly incorrect, i.e. the number of stop and data bits is wrong, then it is possible for the data to appear to be received correctly. For example, if data is transmitted at 7 data bits with 2 stop bits and received as 8 data bits with 1 stop bit, the receiver would get the 7 data bits and set the eighth data bit to a one. If this character was then displayed on the screen, it could appear in the correct format due to the fact that many character sets ignore the eighth bit. In this case, the software and system would appear to work. If the data was used in some other protocol where the eighth bit was either used or assumed to be set to zero, the program and system would fail!