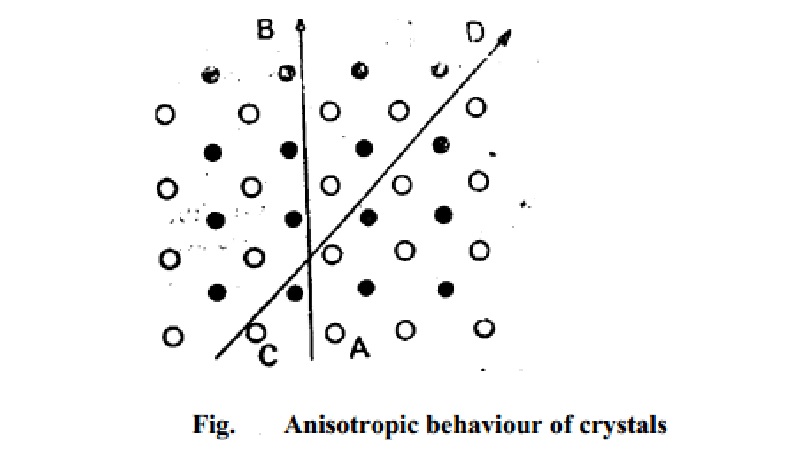 The X-ray diffraction studies reveal that their ultimate particles (viz., molecules, atoms or ions) are arranged in a definite pattern throughout the entire three-dimensional net-work of a crystal. This definite and ordered arrangement of molecules, atoms or ions (as the case may be) extends over a large distance. This is termed as long-range order.

The outstanding characteristics of a crystalline solid are its sharp melting point. Crystalline solids are anisotropic since they exhibit different physical properties in all directions e.g., the electrical and thermal conductivities are different in different directions.

There is another category of solids such as glass, rubber and plastics, which possess properties of incompressibility and rigidity to a certain extent but do not have definite geometrical forms. Such substances are called amorphous solids

Amorphous solids (from the Greek words for 'with out form') neither have ordered arrangement nor sharp melting point like crystals but when heated, they become pliable until they assume the properties usually related to liquids. These solids lack well-defined faces and shapes. Many amorphous solids are mixture of molecules that do not stick together well. Most others are composed of large complicated molecules. Amorphous solids are therefore regarded as super cooled liquids with high material becomes rigid but there the forces of attraction holding the molecules together are so great that the material becomes rigid but there is no regularity of structure. Thus, amorphous solids do not melt at specific temperatures. Instead they soften over a temperature range as intermolecular forces of various strengths are overcome.

Amorphous solids are isotropic as they exhibit same physical properties in all the directions.

Size and shape of crystals

Several naturally occurring solids have definite crystalline shapes, which can be recognized easily. There are many other solid materials, which occur as powders or agglomerates of fine particles and appear to be amorphous. But when an individual particle is examined under a microscope, it is also seen to have a definite crystalline shape. Such solids, in which the crystals are so small that can be recognized only under a powerful microscope, are said to be microcrystalline. The size of a crystal depends on the rate at which it is formed: the slower the rate the bigger the crystal. This is because time is needed by the atoms or molecules to find their proper positions in the crystal structure. Thus, large transparent crystals of sodium chloride, silver chloride, lithium chloride, etc., can be prepared by melting these salts and allowing them to cool very slowly at a uniform rate. It is for this reason that crystals of most of the minerals formed by geological processes are often very large.

i)Faces: Crystals are bound by plane faces. The surfaces usually plannar and arranged on a definite plane (as a result of internal geometry), which bind crystals are called faces.

Faces are of two types:

Like: A crystal having all faces alike e.g. Fluorspar.

Unlike: A crystal having all faces not alike e.g. Galena.

ii) Form: All the faces corresponding to a crystal are said to constitute a form.

iii) Edges: The intersection of two adjacent faces gives rise to the formation of edge.

iv) Interfacial Angle: The angle between the normals to the two intersecting faces is called interfacial angle.