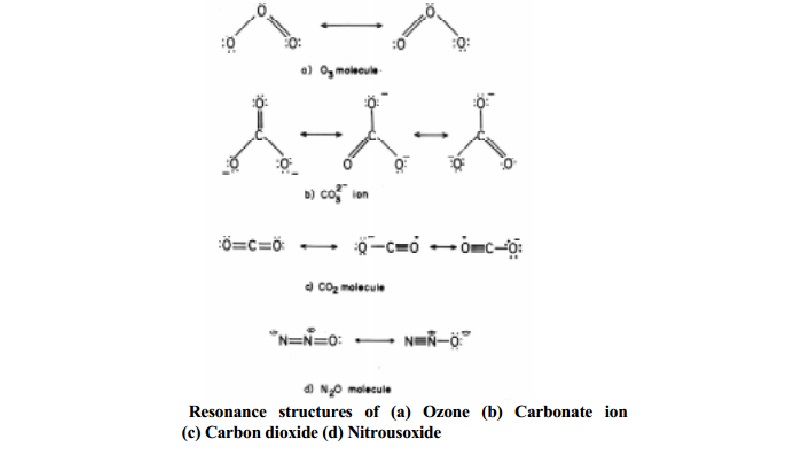 According to the concept of resonance whenever a single Lewis structure cannot describe a molecular structure accurately, a number of structures with similar energy, positions of nuclei, bonding and non bonding pairs of electrons are considered to represent the structure. Each such structure is called as canonical structure.

The resonance structures are possible for molecular ions also. For example, consider resonance in CO32- ion:-

The single Lewis structure based on the presence of two single bonds and one double bond between each carbon and oxygen atoms is inadequate to represent the molecule accurately as it represents unequal bonds. According to experimental findings all carbon to oxygen bonds in CO32- are equivalent. Therefore the carbonate ion is best described as a resonance hybrid of the canonical forms as shown in Fig. b.

There are three canonical forms of CO32-.

In N2O molecule which is a linear molecule, structures with charges on atoms can be written similar to CO2.

Here also the experimental bond length of N-N-bond lies between a double and triple bond and that of N-O bond length lies between a single and a double bond. Therefore N2O exists as a hybrid structure of the two canonical forms with a linear geometry.