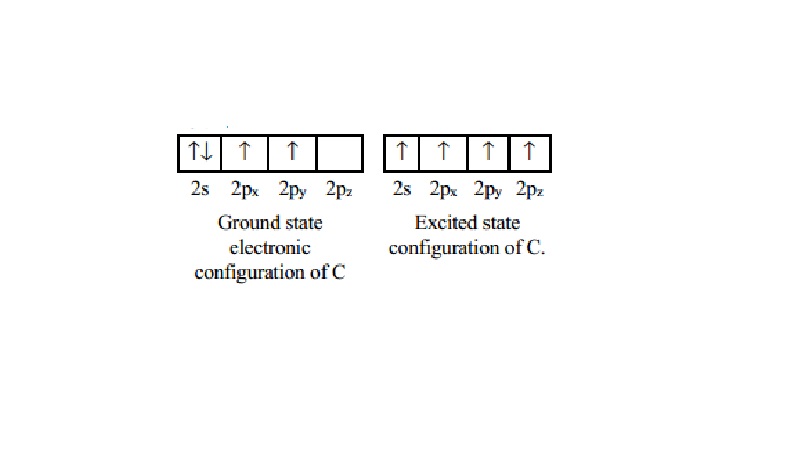 1.    Promotion of electrons to higher or similar energy levels

2.     Mixing up of various s,p,d,f orbitals to form the same number of new orbitals and

3.     Stabilisation of the molecule through bond formations involving hybrid orbitals by release of certain amount of energy which compensates the energy requirement in the electron promotion process.

Atoms of elements like Beryllium, Boron and Carbon have electronic configuration as,

According to VB theory, Beryllium is expected to behave like a noble gas due to its filled shells, which in practice forms a number of compounds like BeF2 and BeH2 proving its bivalency. In case of Boron VB theory predicts univalency due to the presence of one unpaired electron but in practice Boron is trivalent since compounds as BCl3, BH3 etc. are found.

The stable state (Ground State) electronic configuration of C is (2s22px12py1). Electronic configuration of C suggests only bivalency. But carbon forms over a million compounds in all of which carbon is tetravalent. This suggests only tetravalency. This deficiency is overcome by allowing for promotion (or) the excitation of an electron to an orbital of higher energy. Although for electron promotion energy is needed, if that energy is recovered back during a covalent bond formation, or by a bond with a greater strength or by many number of bonds formation, then the electron promotion becomes energetically allowed and assumed to take place initially. In carbon, promotion of an electron to an orbital which is close to itself with an empty orbital of only slightly higher energy which is the 2pz orbital can take place. Then the electron pair is unpaired itself by absorbing the required energy available by the atom from its surrounding and one of the electrons in the original orbital 2s or 2p shifts to the empty higher energy orbital.

Thus promotion of an electron leads to four unpaired electron in the excited state electronic configuration of carbon atom. Each electron can now be utilised to form a covalent bond by sharing an electron coming from the combining atom. The four 'Sig-ma' covalent bonds are possible, each with equivalent strength and overlapping tendency. Further, chemical and physical evidences reveal the four bonds of carbon to be equivalent and that they are tetrahedrally oriented. The promotion of an electron from 2s to 2p orbital leads to four half filled orbitals which can form four bonds leading to greater energy lowering. This energy is more than the initial energy required for the promotion of 2s electron to 2p orbital.

After an electron promotion the 4 electrons are not equivalent, since one of them involves with an s orbital while the other three involve with p orbitals. To explain the equivalence of the four bonds, the concept of hybridisation is introduced.

Dissimilar orbitals like s,p,d with one or many numbers, with nearly the same energy on the same atom may combine or mix completely to form an equal number of equivalent energy new orbitals with properties of their own. This is called as hybridisation of orbitals. The new orbitals formed are known as hybrid orbitals and these orbitals possess the properties of the pure orbitals that are mixed to form them. The hybrid orbitals of an atom are symmetrically distributed around it in space. Essentially, mixing up of orbitals to form new orbitals explains the different geometries of many compounds like CH4, SF6 etc.