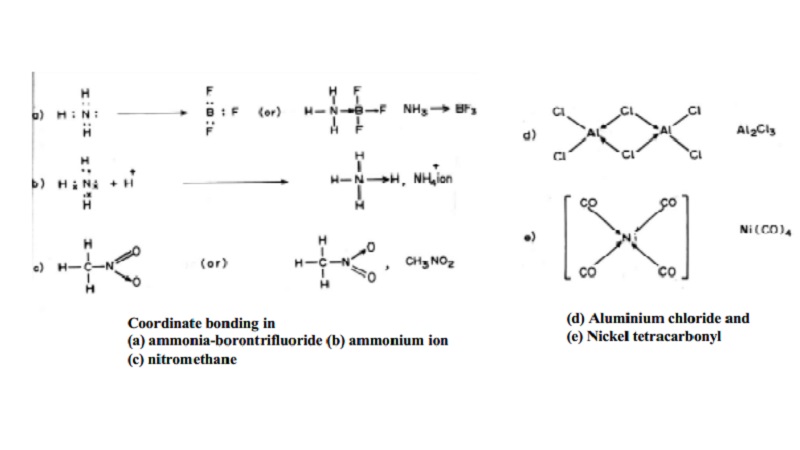 For Example, coordination bond between H3N: and BF3 molecules. The molecule, ammonia (donor) which gives a pair of electron (lone pair) to BF3 molecule which is electron deficient (acceptor) which has an empty orbital to accommodate the pair of electrons. Thus a dative bond is formed and the molecule as a whole is represented as H3N -- > BF3 (Fig. a).

When Proton is added to ammonia, a pair of electron is donated by nitrogen to proton and then proton shares the electron pair to form coordinate covalent bond. 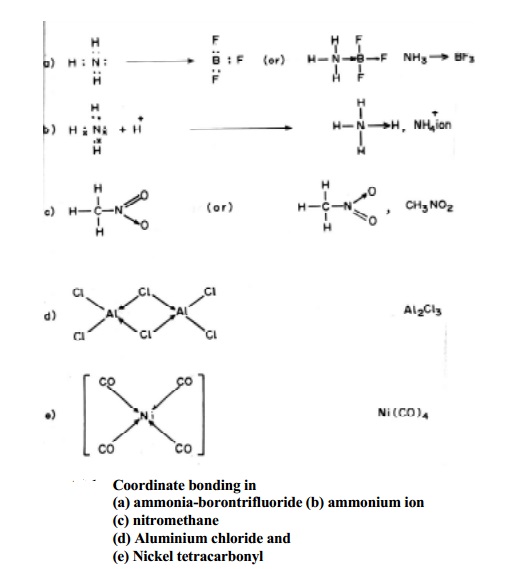 Similarly in (NH4Cl) ammonium chloride, covalent - coordinate bond exists in NH4+ ion only and Cl- ion exists as it is.

In nitro methane (CH3 - NO2), one of the N-O-bond exists in a covalent coordinate type.

Lone pairs of electron from chlorine are donated to electron deficient aluminium atoms in such a way that dimers of AlCl3 are formed easily (Fig. d). The two chlorine atoms act as bridge to link the two Aluminium atoms.

In some complex ion formations, if the central transition metal-ion has empty `d' orbitals then lone pair of electrons from neutral molecules or anions are donated resulting in the formation of coordination bonds. Example : In Nickel tetracarbonyl, the four bonds between central Ni atom and the carbonyl ligands are mainly covalent -coordinate type. This complex exists in square planar geometry.